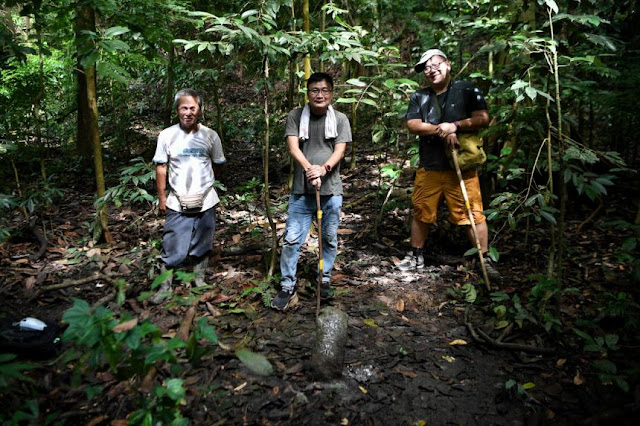 SINGAPORE - A historical boundary marker found near Adam Drive could shed light on the area's history prior to World War II, when it was part of the British Sime Road Camp.

It was discovered last August by Mr Raymond Goh, 58, a pharmacist, along with Mr Peter Pak, 49, an IT project manager, and Mr Soh Ah Beng, 58, a cemetery caretaker.

The marker resembles two that were extracted by the National Heritage Board (NHB) from Dover Forest last October.

Mr Goh, along with his brother Charles, 54, a safety officer, are well known in the heritage community as tomb hunters.

Mr Raymond Goh told The Straits Times he had stumbled upon the marker last year while exploring the area with his friends.

The rectangular marker is about 17cm wide and about 11cm thick. Its exposed surfaces are about 42cm high. On two sides, the marker bears the Chinese characters "Jin Mei Jie", indicating that it was used to demarcate the boundary of land relating to an entity named "Jin Mei", or "Gim Bee" in Hokkien.

However, identifying the marker's original owner has thus far proven to be a challenge for the Goh brothers, who purchased historical documents from the Singapore Land Authority (SLA) to dig deeper into the history of the land surrounding the marker.

To deduce the marker's original owner, the brothers have attempted to eliminate possibilities.

Based on their research, the marker lies between two plots of land, of which one, spanning about 14ha, was bought by Chinese merchant Lim Leack from the East India Company in 1858.

The Goh brothers had known about Lim's ownership of the land around Adam Drive and Sime Road prior to stumbling upon the marker. They had researched the area after they were approached by Mr Lim Soon Hoe - a sixth-generation descendant of the merchant - to identify a land plot mentioned in a legal document dated 1935.

Mr Lim, 62, retrieved this document in 2012 from the National Archives of Singapore while researching his family's history.

The other plot was bought by three persons from the Ong clan in 1872 from Wee Hee, a Chinese businessman.

A decade later in 1882, the British government introduced the Landmarks Ordinance, requiring landowners to install boundary markers to demarcate the extent of their land.

Mr Raymond Goh said the Ong clan's land, which was eventually used as a cemetery, was known as Seh Ong cemetery or Tai Yuan Shan to the Chinese.

Graves belonging to ancestors of the Ong clan still lie on this site, including on land in Adam Drive near the Gim Bee marker. 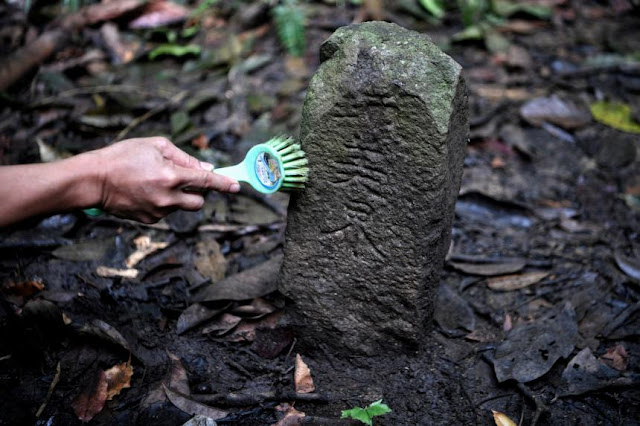 Mr Goh said it is unlikely that the Gim Bee marker could have belonged to the Ong clan, given that the term "Gim Bee" does not in any way resemble the Seh Ong cemetery's name.

Map research consultant Mok Ly Yng, 54, who was commissioned by NHB to research the history of the two Dover Forest markers, said another boundary marker bearing the "Tai Yuan" name was found previously, indicating that would have been the name engraved on Tai Yuan Shan's boundary markers, and not "Gim Bee".

Mr Mok, who purchased documents from SLA to look into the Adam Drive area's history, said it is likely that the Gim Bee marker was erected by someone who was in charge of Lim Leack's land after his death in 1875, which came before installing boundary markers was made compulsory by law.

The Goh brothers' research shows that Lim Leack's land was under the charge of several sets of trustees before it was sold to a rubber company in the mid-1930s by its trustees then - Lim Hong Siang, a great-grandson of Lim Leack, and two others.

Lim Hong Siang had been a trustee of the land from as early as 1906, while the other two were appointed trustees only from 1934.

Although boundary markers were made compulsory in the 1880s, Mr Mok said it was only from 1909 that the practice of erecting them was taken seriously, after a proper survey of Singapore's land was undertaken by the colonial government between 1902 and 1909.

Thus, he suspects that the marker could be associated with Lim Hong Siang, given the timing of his trusteeship, although research has so far not found evidence to prove this. 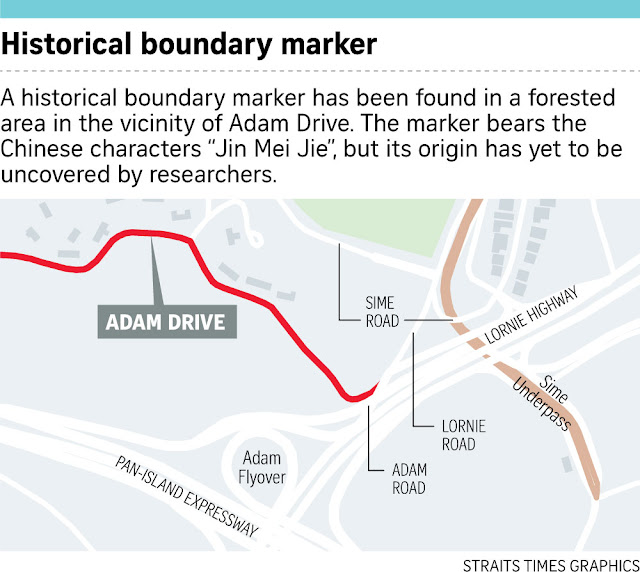 Mr Mok added that it is highly unlikely the Gim Bee marker is a sham, as its present geographical coordinates, recorded by the Goh brothers, correspond with land boundaries recorded in official survey maps from as early as 1935.

Shortly before the land was sold in the 1930s, the remains of Lim Leack's wife Yeo Im Neo and his eldest son Lim Teck Ghee - who were buried within Lim Leack's original land lot - were re-interred in Bukit Brown Cemetery in 1935.

Lim Leack's former land plot is today owned by the state and houses a cluster of bungalows. The area, including the forested parts where the Gim Bee marker stands, is zoned for residential use, subject to detailed planning.

The Goh brothers, who have stumbled upon about a dozen boundary markers over the past two decades, hope NHB will lend its research expertise to uncover the marker's ownership, but not remove it like it did with the Dover Forest markers.

Mr Raymond Goh said keeping the marker on-site is more meaningful than removing it from its context, especially as it is likely to still mark the limits of a present-day land lot based on its geographical coordinates.

The 36 acre land was repurchased by Tan Hoon Chiang in 1906 and given in trust to the great grandsons of Lim Leack (Lim Liak). Tan Hoon Chiang was a business partner of the deceased Lim Liak (of which Lim Liak street was named after). The said land was to be used as a burial ground for the male descendants in the male line of the said Lim leack, until 21 years after the last known trustees have passed, upon which the trustees can sell and dispose of the said piece of land and to divide the net proceeds thereof among the grandsons and more remote male issue .

Given that Lim Leack and descandants came from Gim Lee, it is possible that the Gim Bee is a beautification of the Lee, an not uncommon practice in the past to beautify village names. That is 錦美界 Gim Bee Boundary demarcate the start of the burial land for Lim Liak family members, who hailed from the village of 錦里 Gim Lee