32-year-old Singaporean with ALS dies 8 years after diagnosis; parents converted bedroom into ICU to care for her

32-year-old Singaporean with ALS dies 8 years after diagnosis; parents converted bedroom into 'ICU' to care for her

At the age of 24, Carolyn Chan felt unwell, developed muscle weakness and had difficulty swallowing and talking. She lost 15kg within a year, and was later diagnosed with Amyotrophic Lateral Sclerosis, also known as ALS. 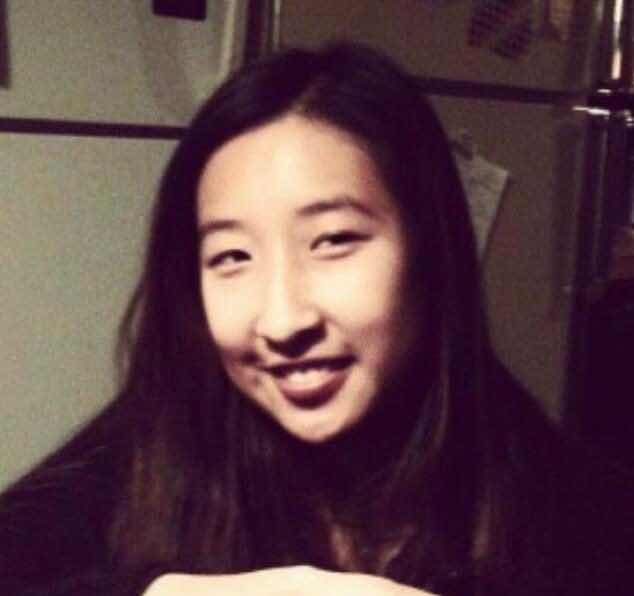 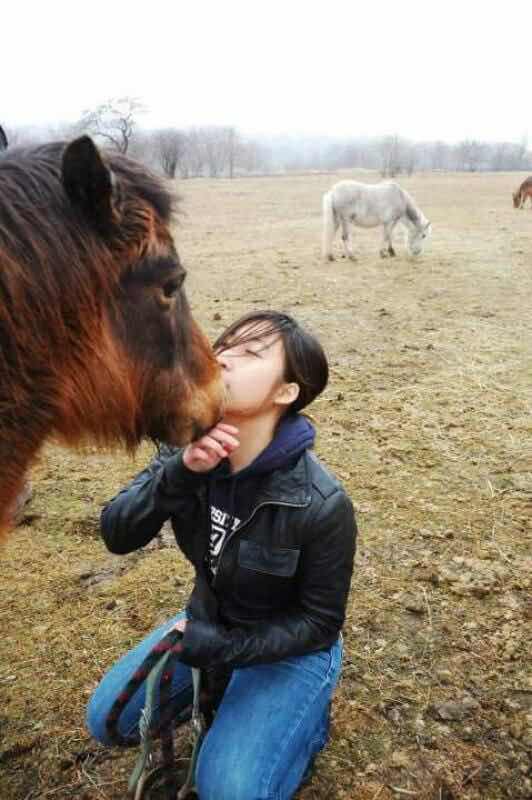 Carolyn Chan loved animals when she was alive

Within a year of her diagnosis, she was paralysed. But with dedicated round-the-clock care by her parents, who even converted their room at home into a makeshift 'intensive care unit' (ICU), they got to spend another eight years with their daughter.

According to ALS.org, the average life expectancy of a person suffering from the disease ranges from two to five years. Chan was 32 years old when she died peacefully at home on March 16 this year.

Chan was working as a social worker in Canada at the time after graduating from high school and university there.

After the diagnosis, Kwek flew to Canada for three months to be with her daughter. They consulted more doctors back in Singapore when they returned but still faced with the sobering reality of the incurable condition.

Despite the devastating prognosis, Kwek said Chan remained optimistic and co-operated on treatment plans. "She never once complained," said Kwek.

While Chan could still take care of herself initially, she gradually lost the ability to breathe and eat on her own and became bedridden.

Not wanting their daughter to spend the rest of her life in a hospital, Kwek and her husband decided to care for her at home.

The couple converted their bedroom into a makeshift ICU and bought equipment such as a ventilator, oxygen concentrator and a hospital bed, so that they could be beside her as she slept.

The couple live with their two other daughters at home and also rely on a live-in helper to help care for Chan, as she required attention every 15 minutes.

As Chan's mental capacities remained intact, the family would bring her out for a movie or to enjoy the outdoors whenever her physical condition allowed. 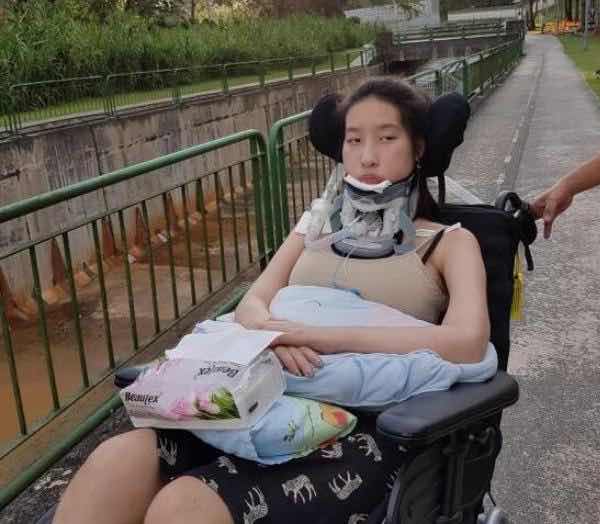 Before every trip out however, they would have to make sure to bring the necessary medical equipment. Chan would also have to be lifted out of her bed by a hoist while being assisted by three others. 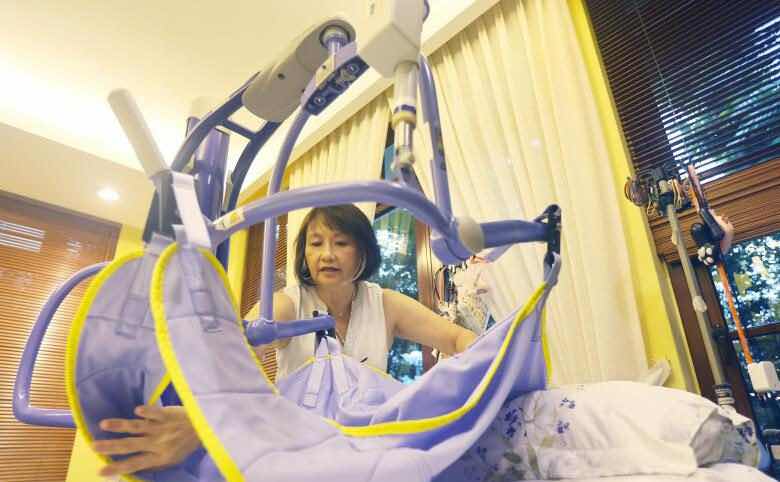 Moving Carolyn from her bed to the wheelchair

Chan's condition gradually deteriorated over the years and she died peacefully at home last month.

Kwek described how even though Chan could not speak or raise her hand, she could still communicate through electronic devices. Through this method, she was able to wish them goodnight and say "I love you".

But in the later stages when her eye muscles degenerated and there were times she could not even open her eyelids, Chan had to rely on moving her eyeballs left and right to signal her intention. This continued for several years.

"Seeing our daughter suffer was painful, but we had to be strong and not give up hope," Kwek shared, adding that Chan was "not able to talk or express her pain".

"We would only realise she was uncomfortable when she teared up. It upset us to see that, but if we were to show our sadness she would be upset too, so we had to remain strong and take care of her to the best of our ability."

Kwek hopes to raise people's awareness of the debilitating condition by sharing her daughter's story, and that it would inspire others not to lose hope.

She shared that if expectations are well-managed and adequate assistance is provided, prolonging the lives of ALS patients is possible.

"The disease has no effect on patients' cognitive and sensory abilities, so they may experience persistent discomfort from the pain and itch. They can also feel a sense of guilt towards their caregivers or for the financial liabilities their condition brings and be depressed or distressed," said Kwek.

"My daughter was always optimistic despite her condition. We were all by her side when she passed and she went peacefully. I believe she is in another wonderful place now," Kwek told the Chinese evening daily.