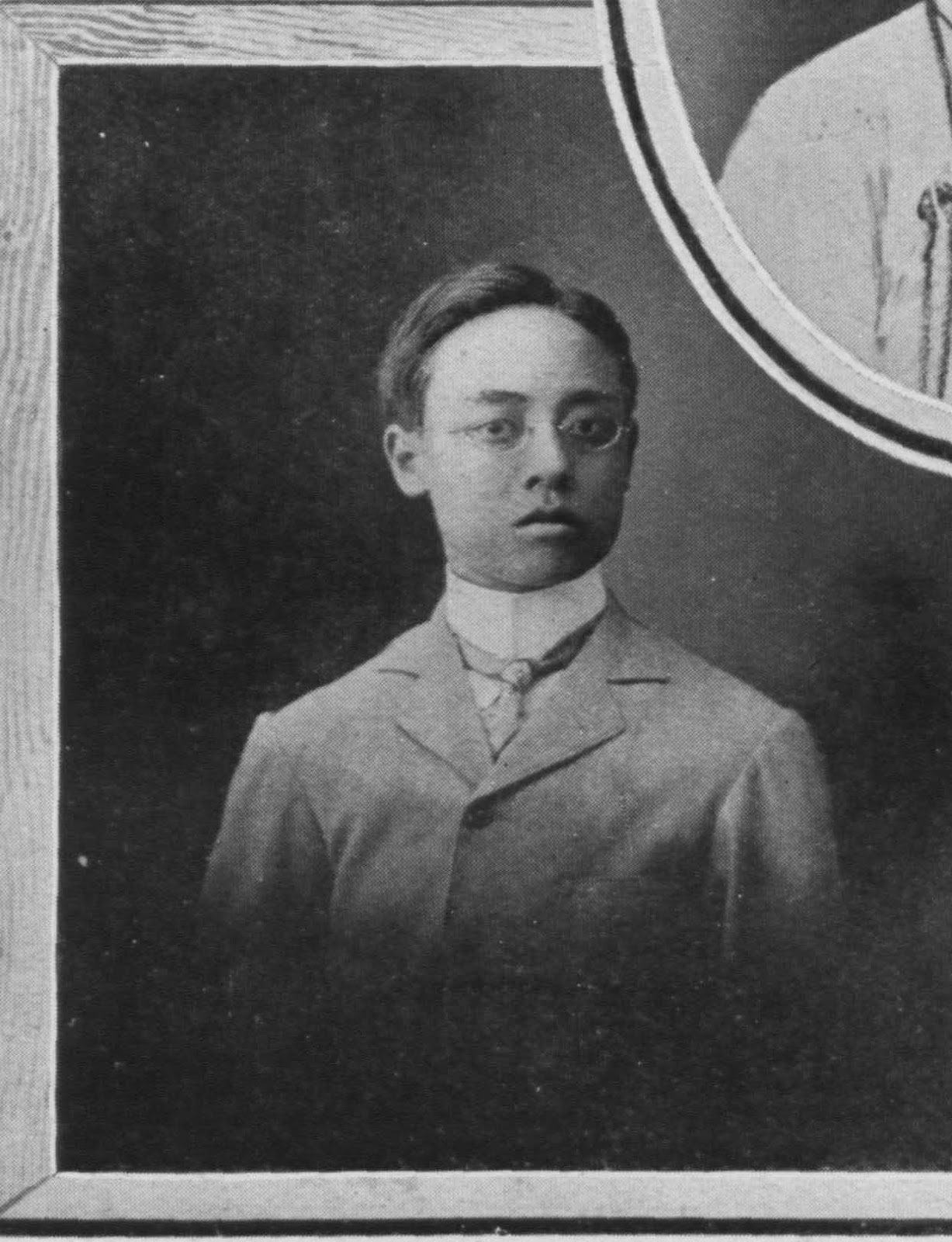 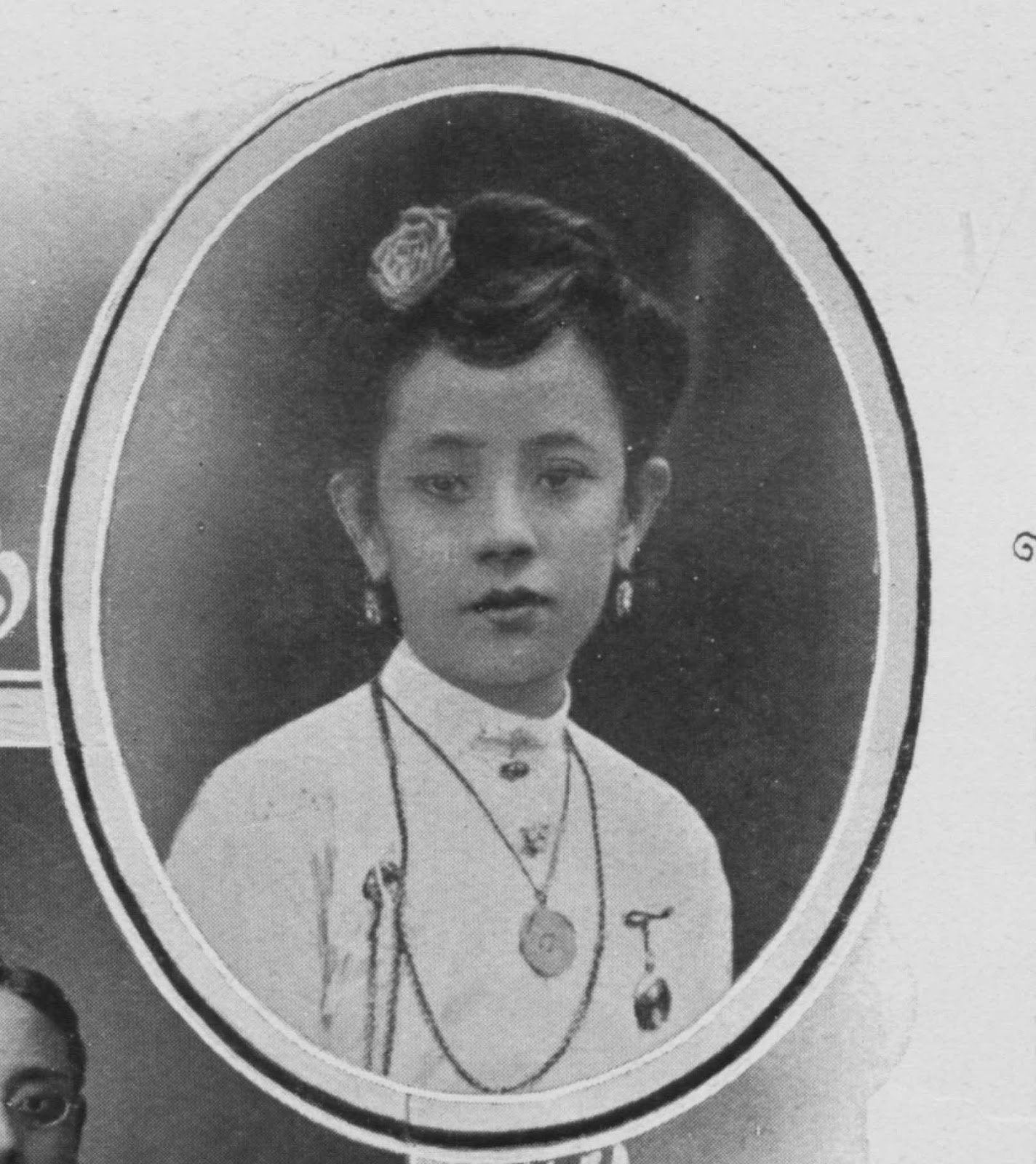 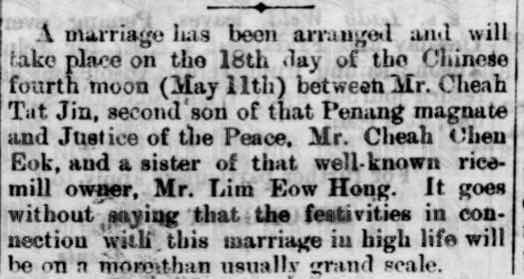 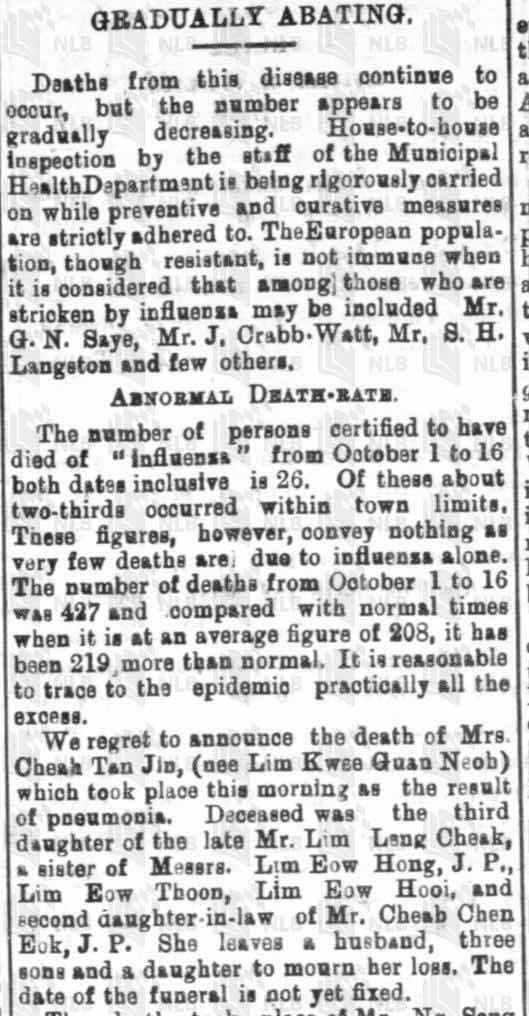 Twenty Century Impression Of British Malaya
Mr. Cheah Chen Eok, Superintendent of the Pinang Opium and Spirit Farm, is the only son of the late Mr. Cheah Sim Hean, merchant, of Pinang. He was born in 1852, and received his education at the Pinang Free School. When he was sixteen years of age he entered the service of Messrs. Boon Tek e Co., ships' chandlers, but shortly afterwards went to the Pinang branch of the Chartered Mercantile Bank of India, London, and China. There he remained for eight years, receiving a sound financial training, and in 1876 he commenced business as a ships' chandler and general merchant under the style of Chen Eok e Co. After six years' successful trading he embarked upon opium and spirit farming, and was connected with practicallv every farm in Singapore and Pinang for twenty-five years. His management of these mammoth concerns was beyond all criticisms, and although in 1902 retired from active business, he consented to superintend the affairs of the present Penang farm at the urgent request of the syndicate.
In 1872, he married the daughter of the late Foo Tye Sin, one of the best known Chinamen in Penang. He has six sons and three daughters, and hs won the high esteem of all classes of the community by his sterling qualities and his charitable and unassuming nature.
Mr. Cheah Tat Jin, who was born at Pinang in 1886. This gentleman received his education at the St. Xavier's Institution. In addition to his connection with the opium farm, he is a partner in the shipping firm of Keng Bee. He is a member of the Turf Club and of the Chinese Recreation Club. In May, 1906, he married Lim Kvvee Guan, third daughter of Mr. Lim Leng Cheak, late manufacturer and shipowner of Pinang. Mr. Cheah Tat Jin resides at " Eokham," Pinang 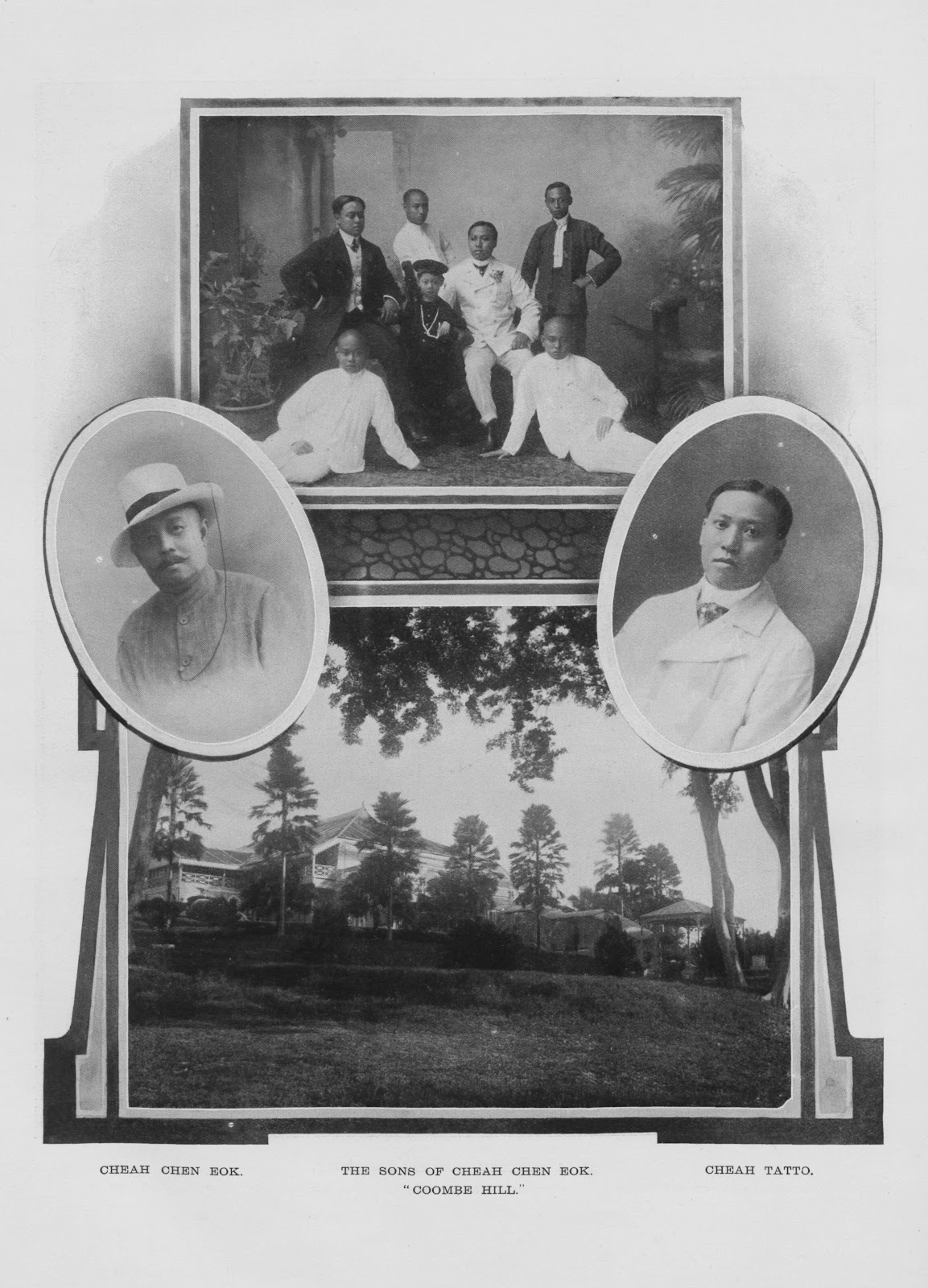 Cheah Chen Eok and his sons 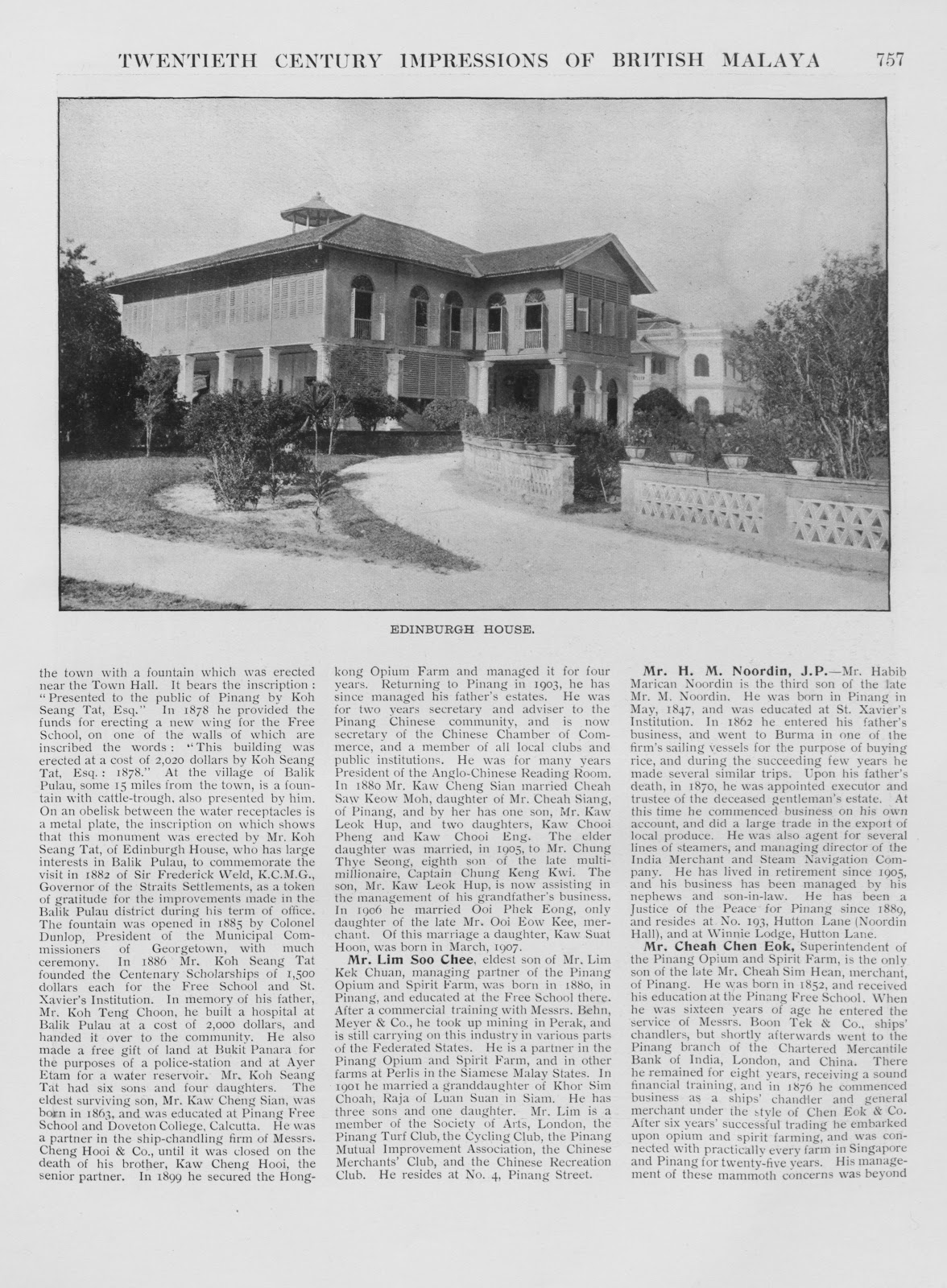 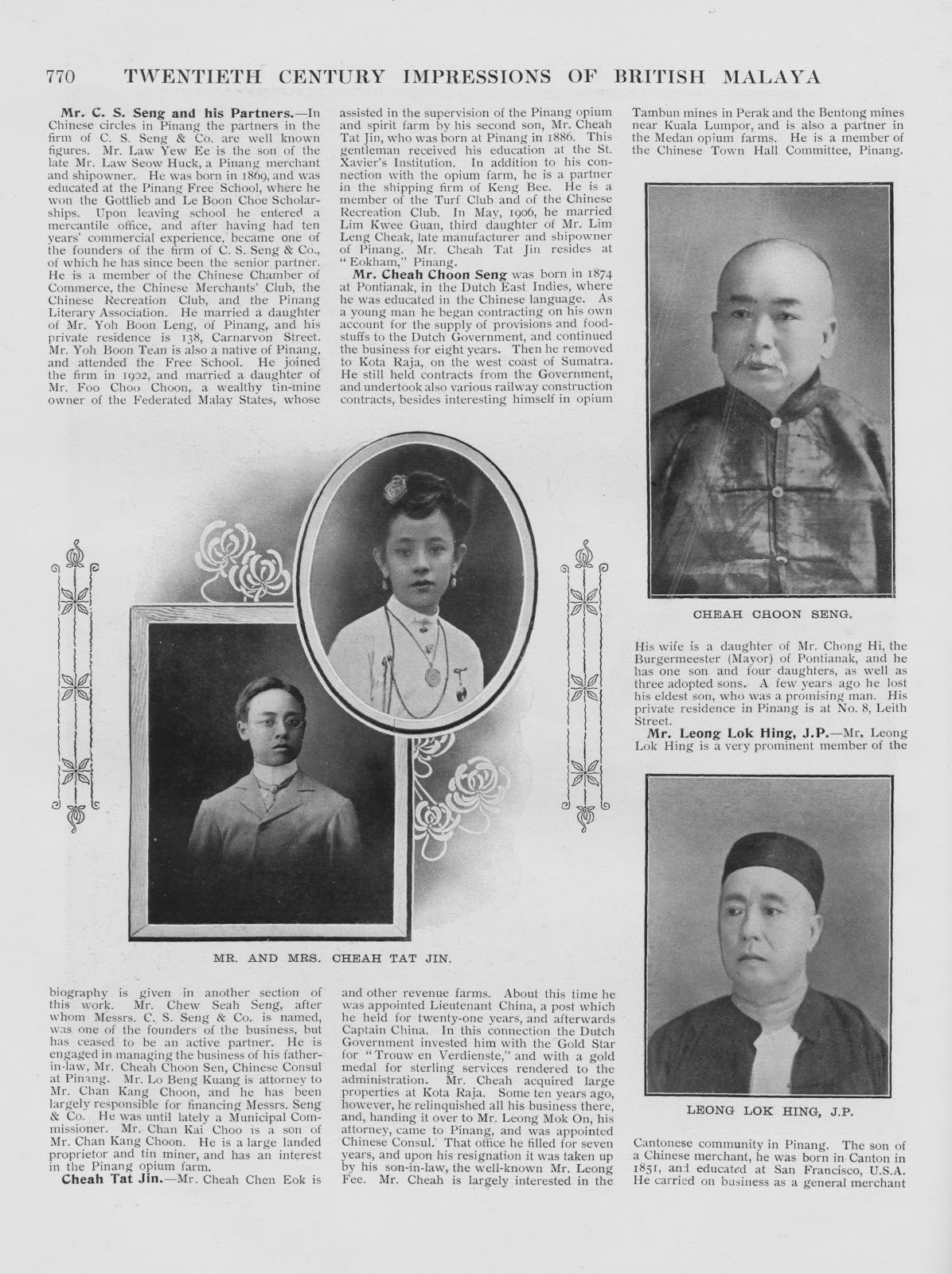 Lim Leng Cheak Family
LENG CHEAK n CO. In Pinang are some of the largest rice and oil mills in Malaya, and it is worthy of note that they are nearly all owned by Chinese
One of the properties is the Chip Hong Bee Mill, owned by Messrs. Leng Cheak n Co. The late Mr. Lim Leng Cheak, founder of the firm, had a remarkable career.
The son of one of the first Chinese to come to the settlement, he was born in Pinang, in humble circumstances, in 1850, and his start in life was made as a clerk in a mercantile office. A few years later he commenced business on his own account by opening a general store. By careful management he was able to save a little capital and went to Achin, where he entered into partnership with another Chinese merchant. The partners purchased one or two sailing-vessels, and did a large trade in carrying pepper from Achin to Pinang and there disposing of it. Later, they ran a fleet of steamships between the same ports, and, when his partner retired from the business in 1879, Mr. Lim Leng Cheak took over the entire concern himself. At the invitation of the Sultan of Kedah, with whom he was on terms of cordial friendship, he opened up a new enterprise - a tapioca estate - in the Kulim district of that potentate's territory. The Sultan also granted him a twenty years' monopoly in 1888, when he established a rice mill in Alor Star, Kedah. This privilege was extended to his successors, and is enjoyed by them to this day. In addition to these operations, Mr. Lim Leng Cheak planted coffee and coconuts in Kulim, Kedah, was lessee of the Opium, Spirit, and Padi Farms, and c., started a rice mill in Pinang in 1893, and became a director of the Singapore Opium and Spirit Farm. When Mr. Lim Leng Cheak died at the age of fifty-one on February 16, I901,he left an extensive and varied business of the first importance. His family consisted of fifteen children eight sons and seven daughters and his eldest son, Mr. Lim Eow Hong, is now the managing executor of the business.
This gentleman was born in Pinang in 1878 and was educated at the Free School and at a Chinese school. He became assistant to his father at the age of seventeen, and four years later was appointed manager. His brother, Mr. Lim Eow Thoon, manages the Pinang rice mill. Messrs. Lim Leng Cheak are the owners of the Chip Bee Rice Mill, Alor Star (Kedah), the Chip Hong Bee Rice Mill (Bridge Street, Pinang), and a large tapioca mill (Kulim, Kedah). In 1899 they started a sugar mill at Alor Star. They convey their produce in their own fleet of steamers  - the Kedah line of passenger and cargo boats - have a tapioca estate embracing 14,000 orlongs in Kulim, Kedah, and are the employers of a thousand men. They import large quantities of padi and prepare both white and boiled rice in their mills. These products they supply to estates in Kedah, Province Wellesley, and the Federated Malay States, besides exporting to Ceylon, India, and Mauritius. Sugar they sell locally, and tapioca they send to London, Havre, Nantes, and many other European ports. Messrs. John Buttery e Co. are their London agents. Mr. Lim Eow Hong is one of the leading Chinese in the settlement, a member of the committee of the Free School, a director of the Straits Echo and Criterion Press, a committee member of the Pinang Association, and a part owner of the Pinang Foundry. His eldest son is being educated at Dollar, Scotland 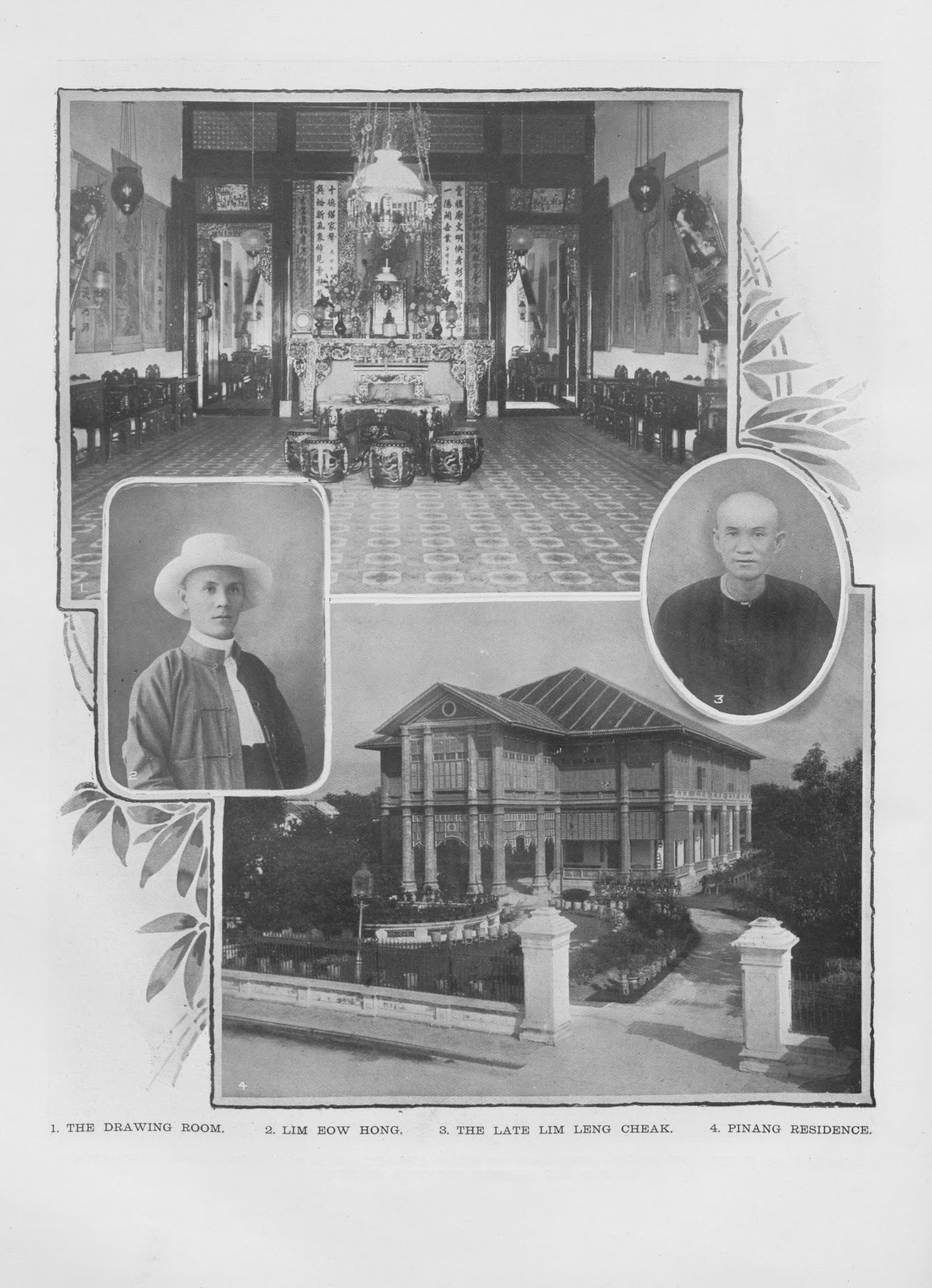 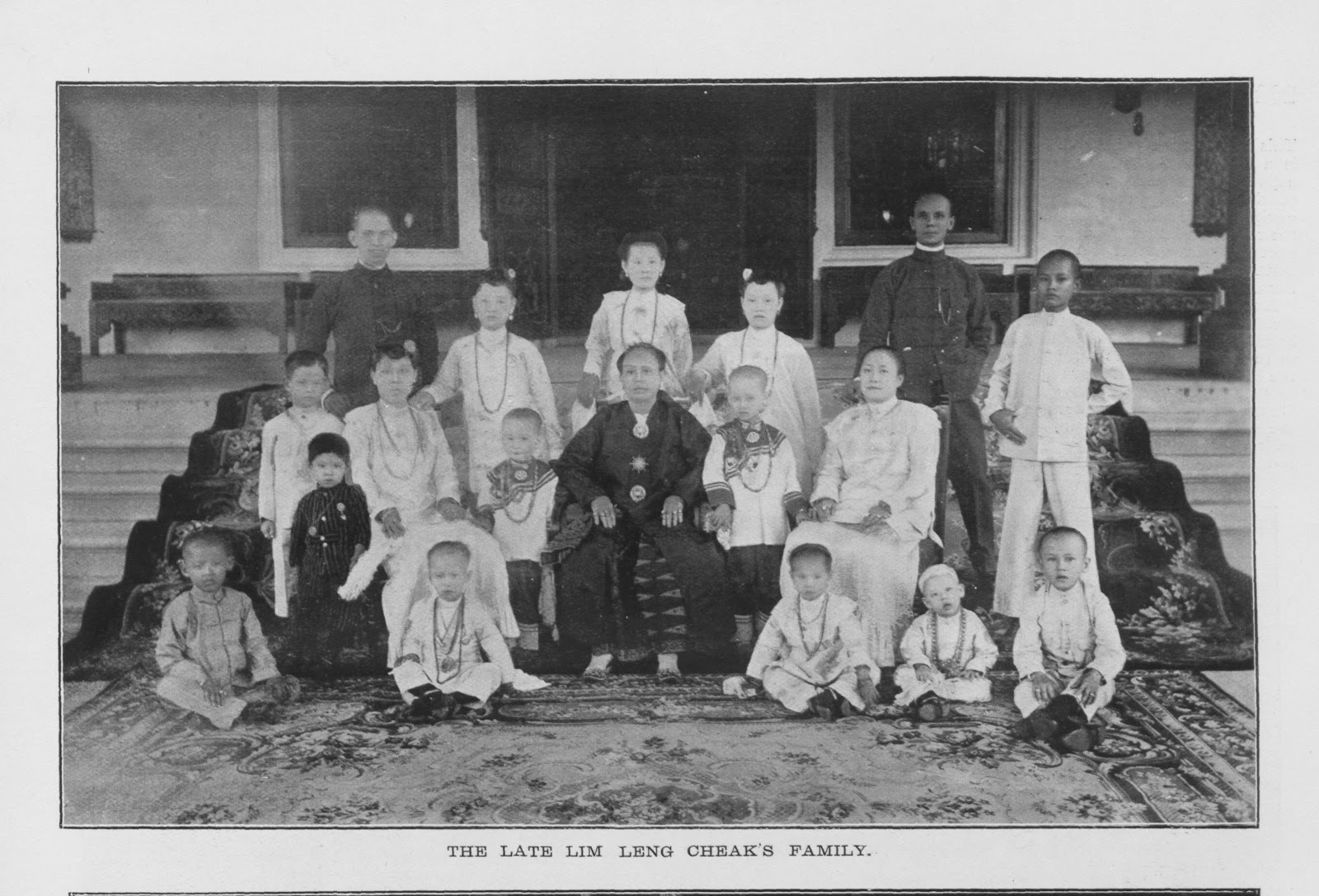 The Late Lim Leng Cheak's Family . His wife is Tan Tay Seang Neoh
When he died in 1901, he has 8 sons and 7 daughters 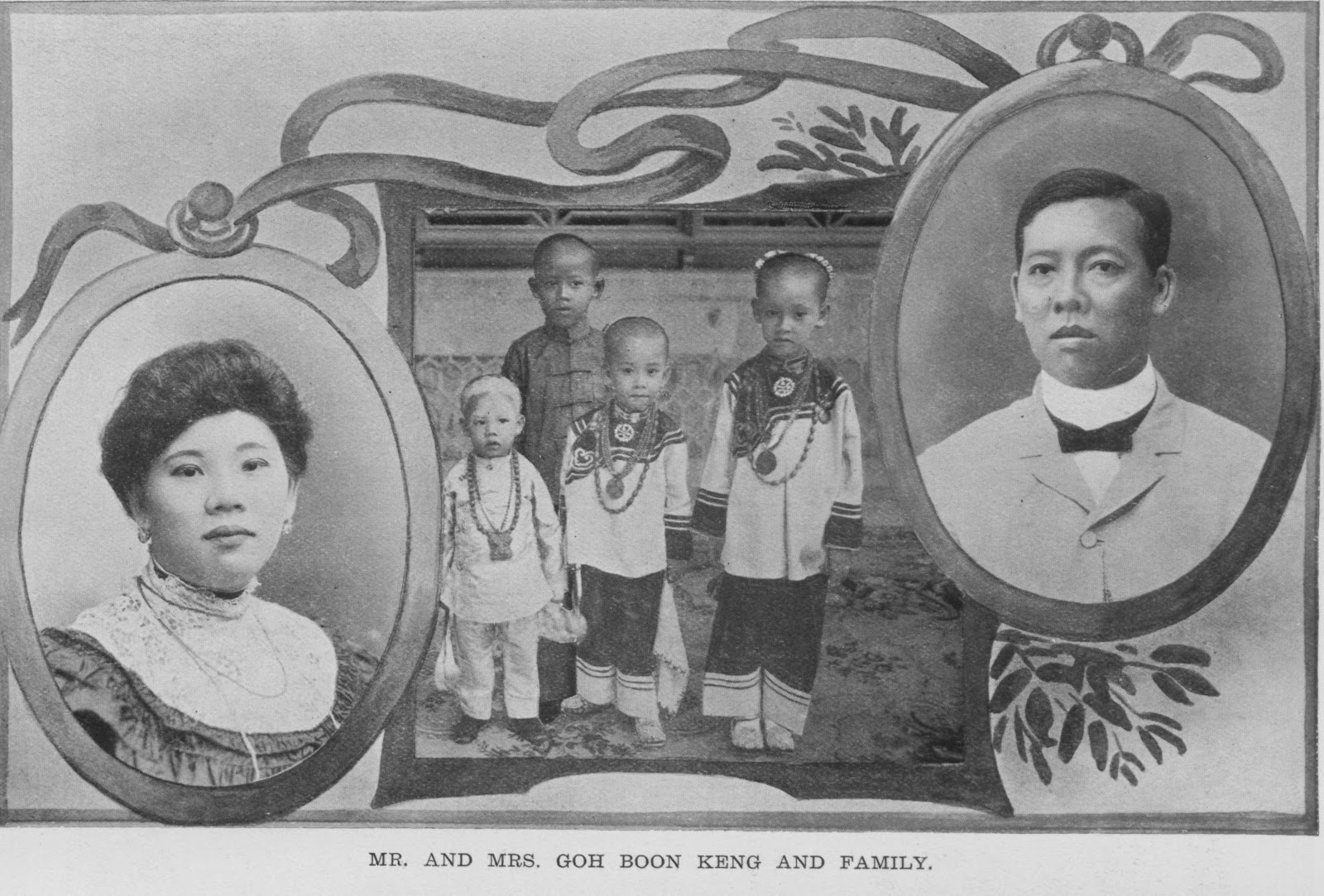 Goh Boon Keng and Lim Kwee Sean, eldest daughter of Lim Cheng Leak and their 4 children . They were married in 1894.  You can see the children in the family photo of Lim Leng Cheak. Lim Kwee Sean is sitting on the right of Madam Tan Tay Seang 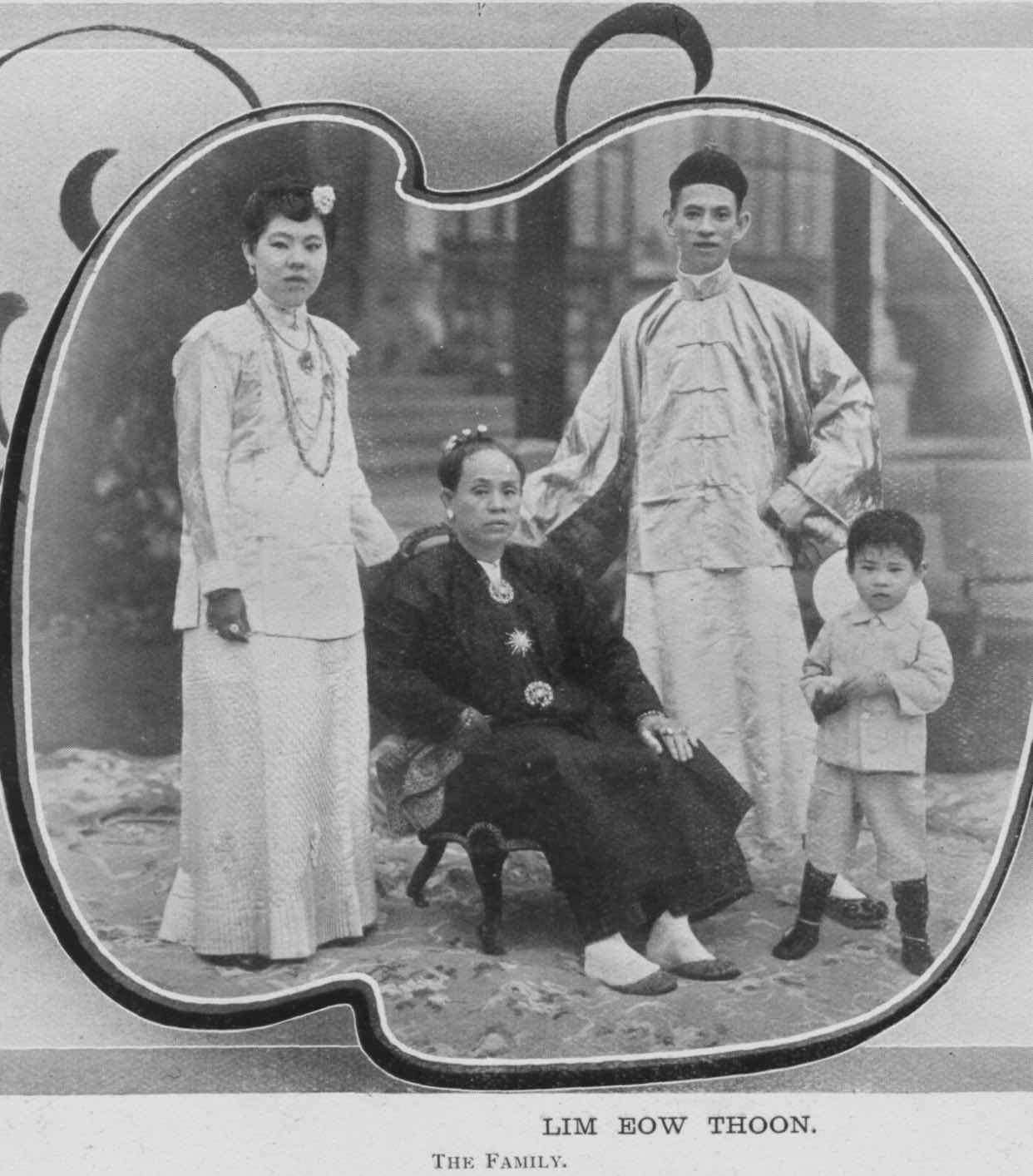 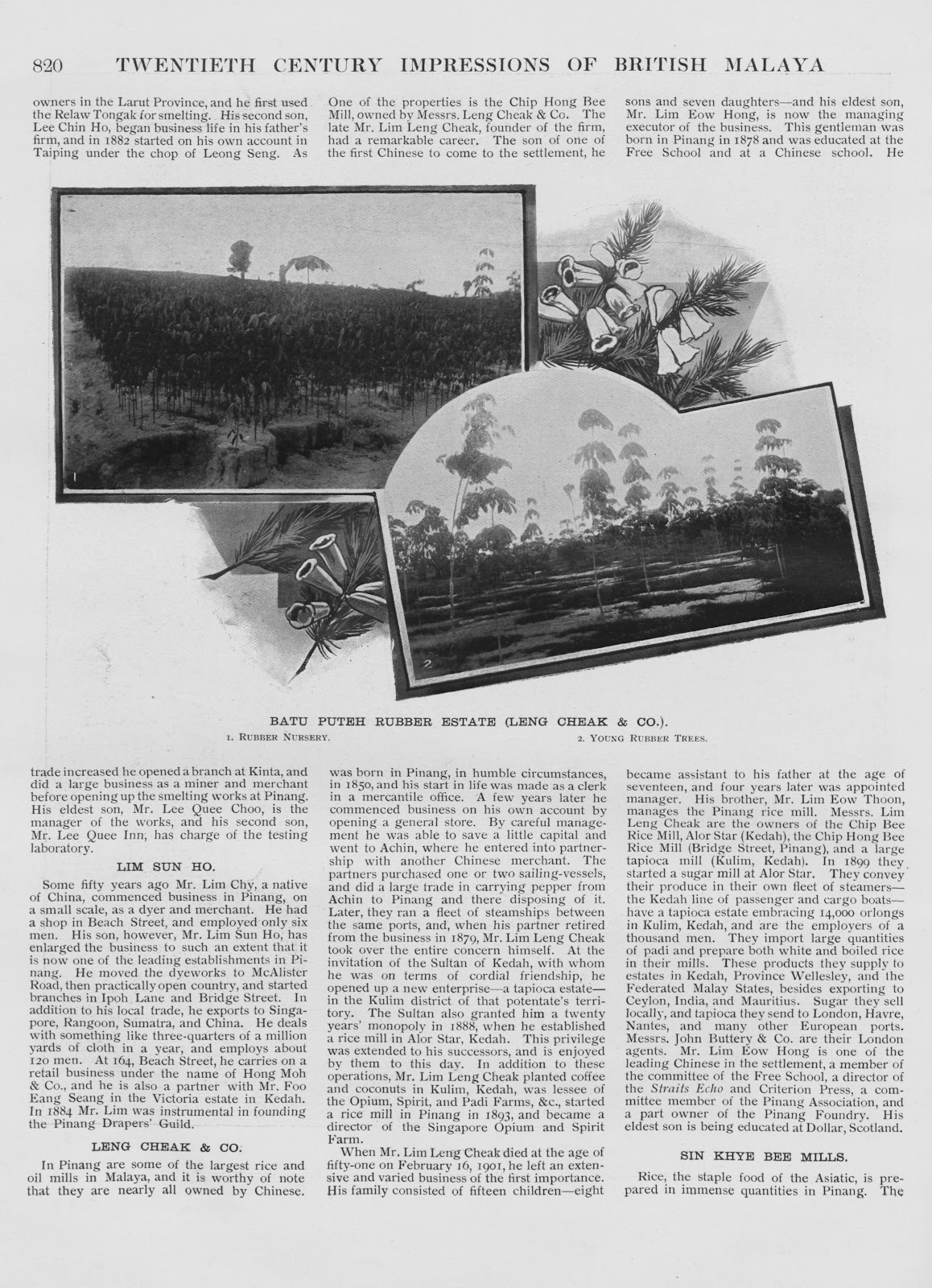 Note
Thanks to Alex Tan for sharing some of his father's collection of photos at BBHP Family day. His father is the famed historian Tan Yeok Seong. His annotation at the back of this photo: this is a rich lady from Penang. She is wearing expensive jewellery and diamonds worth $160,000 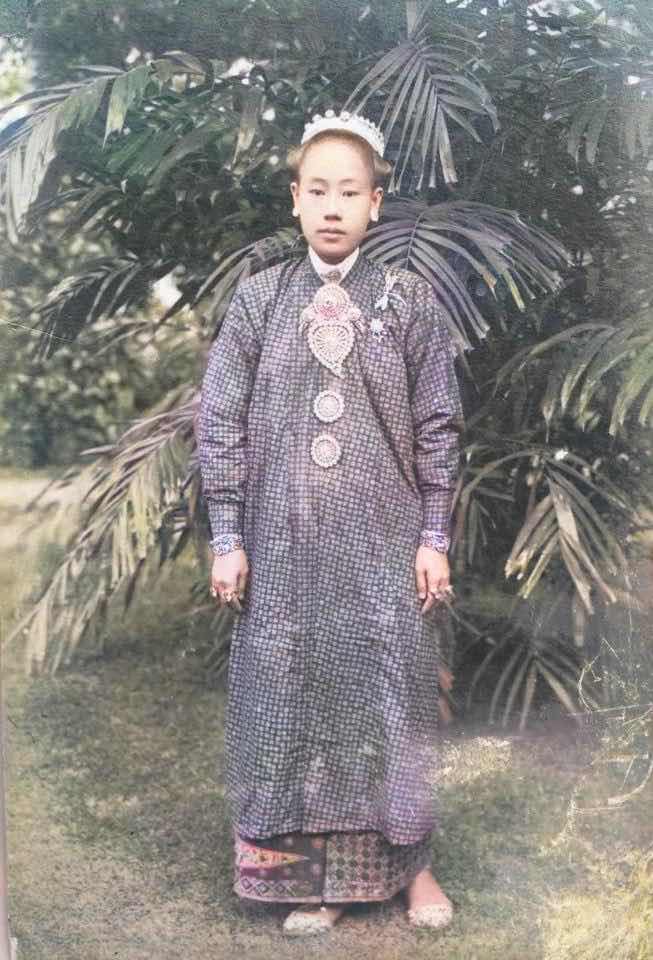 Based on the info on the discussion,  I would like to concur above is that of Lim Kwee Guan Neo, third daughter of Lim Leng Cheak 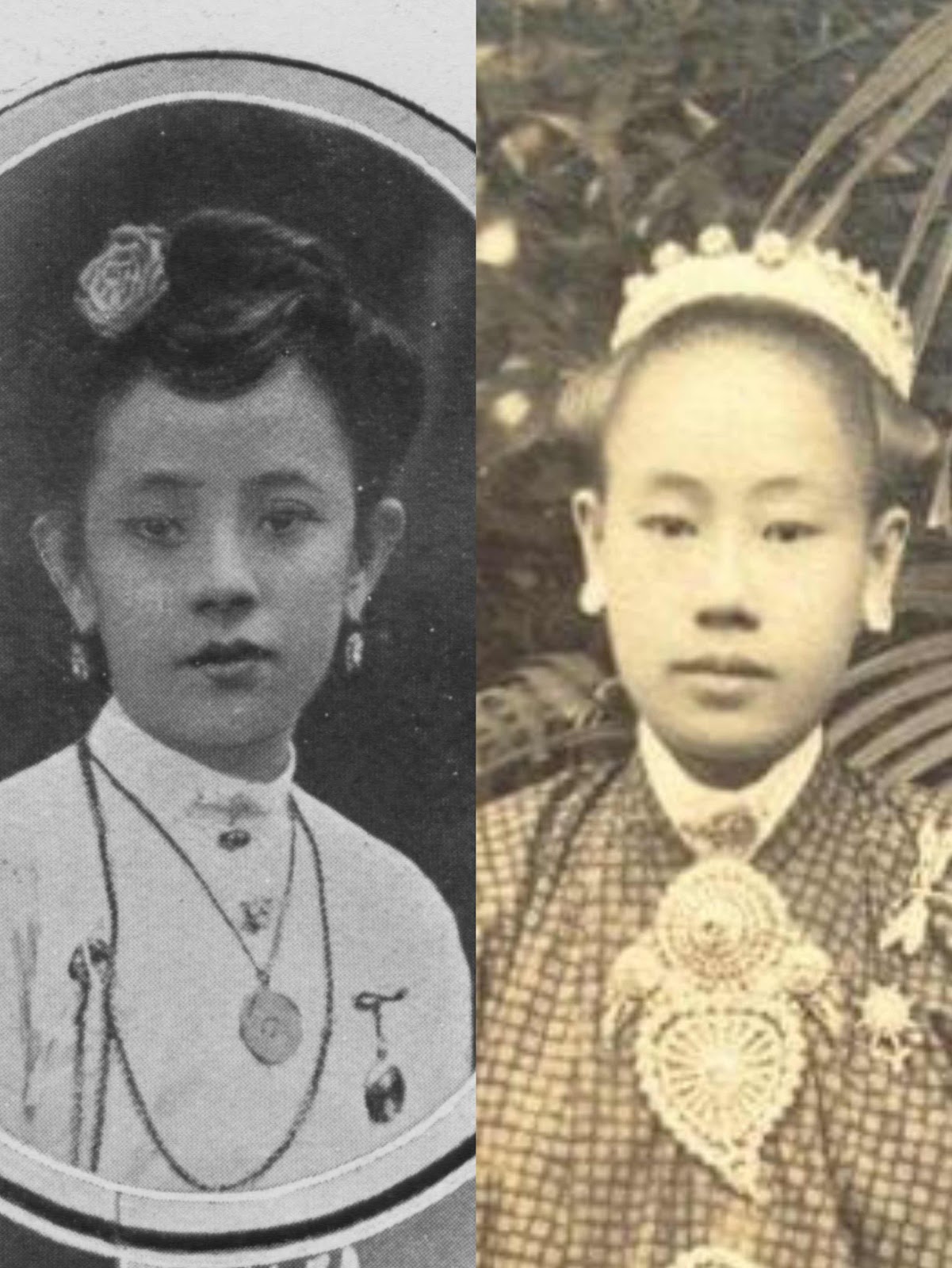