April 18, 2019
一張照片背後的辛酸故事
The story behind the photo of Tan Soo Bin's family picture at Panglima Prang believed to be taken around 1920.

Song Guat Neo has suffered from a chronic skin disease and frequently visited a chye tng to seek treatment from teacher there and pray for a cure.

When Mdm Song was cured of her ailment, she decided to dedicate her life to religion. She eventually rose to the rank of Kor Tai and supervised the two vegetarian convents for women. Subsequently, many of the residents were able to converse in Peranakan;  the food also acquired Peranakan flavour. Indeed, the chye tngs became closely identified with the  Peranakan community and its way of life 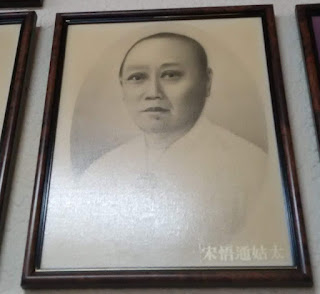 Tan Jiak Kim has passed away on Oct 1917.   His third wife Ang Geok Lan would be slightly more than 40 years at that time.

She would died in a few years' time in 1925
Jiak Kim eldest daughter Tan Suat Neo was married to Ong Hood Hin, son of Ong Tiang Soon in 1905, but died just a few years later in 1909.

This picture should also have be taken shortly after the death of Chia Teck Kim (DOD 22 Oct 1918) as he was not seen in this picture.  He was only 30 years old, son of Chia Keng Bock and grandson of Chia Ann Siang

His widow Tan Peng Neo (also 30 years old) would have brought their daughter Swee Neo back to her parents house at Panglima Prang. Peng Neo was the second daughter of Tan Jiak Kim

Compared to a earlier picture of Tan Jiak Kim and his family taken around 1917 shortly before he passed away (DOD 22 Oct 1917), his two grand children Tan Eng Wan and Tan Eng Chiang (children of Tan Soo Bin) had grown by a couple of years 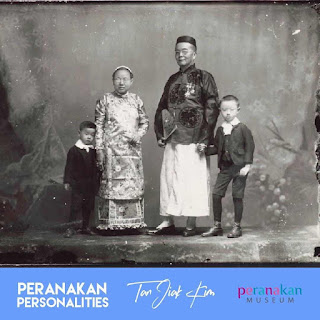 Tan Jiak Kim has married three daughters of Ang Kim Tee,  after they died successively after one another.

The young athletic gentleman standing besides Tan Peng Neo and Song Guat Neo was Lim Kian Beng.  He has just married Jiak Kim youngest daughter Tan Sun Neo a few years ago in July 1917.  Lim Kian Beng was a long time member of the Straits Chinese Physical Culturists
As for Tan Soo Bin’s children, his youngest son Tan Eng Ann would died during the occupation years in Oct 15 1943 after a short illness . He was born of the second wife Helen Yeo Yam Neo, a daughter of Yeo Poon Seng. Yam Neo herself died shortly there after in Dec 23  1943 at the age of 50.  Yam Neo ‘s daughter Rosalind Tan Hoe Neo passed away on Apr 29, 1941 at Melbourne, a few months after going there to study infant welfare work. Tan Peng Neo has adopted Hoe Neo as a daughter as well.
Tan Soo Bin first wife Lo Tsung Kee has passed away a few years ago in 1914 before leaving behind Eng Chiang, Eng Wan, Yew Neo, Kee Neo and Cheok Neo.
Eng Chiang lived a relatively long life till 1998 at the age of 89.
But his sisters Kee Neo died shortly after Soo Bin’s death while Cheok Neo died in 1933 at the young age of 23. Cheok Neo was married to Ong Cheng Bee, son of Ong Hood Hin
Thanks to Anthony Sng, Matt Tan, Tan Koon Siang, Vivienne Tan and Ying Rou Show for assistance.

Research is still ongoing for this article.  Any comments / suggestions are welcome.

Many of the info are based on tombstones found in Bukit Brown / Chua Chu Kang cemetery and newspapers archives by NAS.