The new Lornie Highway - previously known as Bukit Brown Road - was greeted on its first working morning yesterday with heavy and slow traffic. 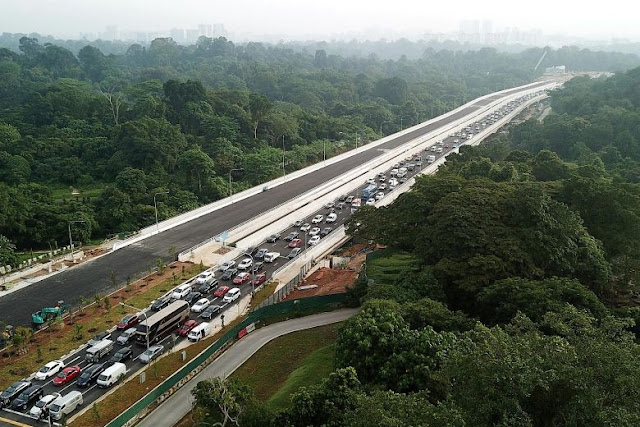 The traffic in Lornie Highway towards the Pan-Island Expressway as well as Adam Road and Farrer Road yesterday morning. The first section of the new highway had opened to much lighter traffic on Sunday.ST PHOTO: LIM YAOHUI

The first section of the new highway had opened to much lighter traffic on Sunday.

He drove from his home in Serangoon to his office in Clementi, taking the new highway. Though he entered the highway at about 8am, he was stuck there for almost an hour.

"Traffic was very heavy both going into and out of the highway. I think drivers were unsure of the new road and the exits and were going a little slow," he said.

Administrative assistant Christine Lim, 37, also experienced slow traffic on the highway at around 8am yesterday, taking 15 minutes more to get to her Bukit Merah office from her Yishun home.

"I expected traffic to be slow since it was the first working day for the highway. It's a different road, so people would take their time and look around," she said.

"While peak traffic is still expected with the opening of the new southbound Lornie Highway, the full completion of Lornie Highway in the first quarter of 2019 will help to ease congestion in Lornie Road and the PIE (Pan-Island Expressway), and cater to expected growth in future traffic demand."

The LTA will continue to closely monitor traffic conditions in Lornie Road, said the spokesman, noting that traffic signs have been provided on site to help motorists navigate to their destinations using the new road.

"During this interim period, we seek motorists' patience and understanding as construction works are carried out to complete the remaining tunnels and road system," said the spokesman.

Lornie Highway was announced in 2011 and at first slated to be completed by the middle of 2016. It went through repeated delays in the past two years.

The southbound section of the road, which runs parallel to Lornie Road, facilitates traffic flow from Thomson towards the PIE as well as Adam Road and Farrer Road.

The LTA said this month that motorists heading towards the PIE, Adam Road and Farrer Road are advised to use the new highway to get to their destinations. The existing southbound four-lane Lornie Road was reduced to two lanes on Sunday.

Though Lornie Highway has not seen a great start, drivers are hopeful the morning peak period journey on the highway will improve.

Ms Lim said: "The new road looks amazing and is better than the old one. Lornie Road has had bad traffic for years so I really hope this new highway improves things."

Mr Mahindra said he feels traffic conditions will get better once drivers get used to the highway.

"I think once people get used to using it, things will get better. Maybe in a few weeks. The road used to have more curves but now it's much straighter. So people should be able to go faster," he said.
News