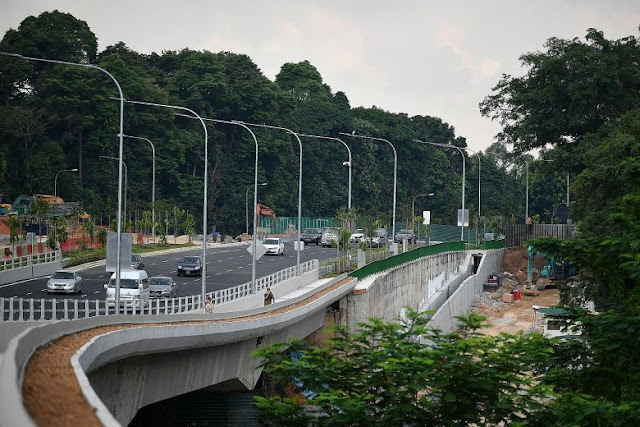 Vehicles travelling along the southbound Lornie Highway yesterday. The northbound part of the highway will be completed in phases.ST PHOTO: LIM YAOHUI

After repeated delays stretching more than two years, the first section of the Lornie Highway - previously known as the Bukit Brown Road - was finally opened to traffic early yesterday.

The southbound section of the road, which runs parallel to Lornie Road, facilitates traffic flow from Thomson towards the Pan-Island Expressway (PIE) as well as Adam and Farrer roads.


A drive by The Straits Times yesterday morning on both Lornie Road and the new Lornie Highway found traffic to be smooth.

Residents and motorists hope the new highway will ease traffic on Lornie Road, which can slow to a crawl during peak hours.

"The golden hour for the jam on Lornie Road is 8am," said entrepreneur Delane Lim, 33, who travels from Sengkang to Adam Road or Bukit Timah every day. "The filtering lane where vehicles enter the road is always jammed."


"With the new highway, I think it's likely to save five minutes of travelling time and ease the congestion a little," he added.

The Land Transport Authority said earlier this month that motorists heading towards the PIE, Adam Road and Farrer Road are advised to use the new highway to reach their destinations.

The new Lornie Highway, when fully completed by the first quarter of next year, will cater to expected growth in future traffic demand.


The existing southbound four-lane Lornie Road will also be reduced to two lanes. Traffic on the MacRitchie Viaduct flows directly onto the new highway. Southbound motorists using Lornie Road will have to access it via surface roads.

The northbound Lornie Highway will be completed in phases. When the stretch fully opens by the first quarter of next year, a new underpass at the Sime Road junction will remove the need for the existing signalised junction there.

Lornie Highway is meant to cater to growth in future traffic demand arising from redevelopment of the Bukit Brown area. Traffic is expected to increase by 20 to 30 per cent by 2020.

The road project had been delayed repeatedly. It was announced in 2011, and at first slated to be completed by mid-2016, then by end-2017, and then in two phases from the third quarter of this year.


When the project was announced, it stirred up strong protests from nature and heritage groups because it cut across a vast forested area and the Bukit Brown cemetery, where many of Singapore's pioneers were buried. More than 3,000 graves in the area have been exhumed.

Mr Alvin Tan, 52, chief operating officer of a renewable energy company, uses Lornie Road to travel from Bukit Timah to the Upper Thomson Road area a few times a week. He said he did not think there was a need for a new highway just to shave off a few minutes of travel.

Agreeing, research assistant Craig D' Souza, 30, who lives opposite Thomson Plaza, said it is a pity to see a section of the forest being cleared for a road.

"However, I understand there are practical reasons for this highway, especially since future development around the area is expected."
News