SINGAPORE - Cracks across at least two lanes on Adam Road caused a massive traffic jam tailing back to Bartley and Serangoon during the morning rush on Friday (June 1).

The Land Transport Authority said the cracks, which appeared right next to a huge excavation to build an underpass which will be part of the Bukit Brown road, were caused by water pressure that had built up because of heavy rain. 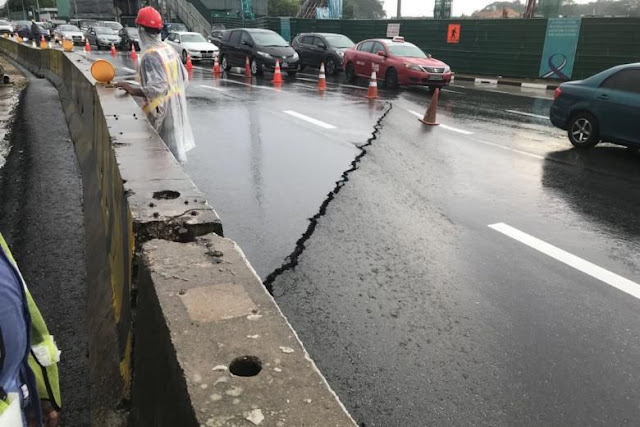 The cracks, which appeared right next to a huge excavation to build an underpass which will be part of the Bukit Brown road, were caused by water pressure that had built up because of heavy rain.PHOTO: ST READER

The LTA said the it discovered the cracks at 8am along a stretch of Adam Road after the MacRitchie Flyover.

“Two out of four lanes were immediately closed to facilitate repairs,” a spokesman said, adding that all lanes were reopened at about 10am, “after we ascertained that the road is safe for use”.

The widespread congestion however, was still apparent well past 10.30am.

After investigating, the authority issued a follow-up statement at around 6.40m. In it, it said heavy rain had led to water to accumulating and seeping under the road base.

The built-up pressure from the water caused the road section “to heave, thus resulting in the cracks on the road surface”.

It said the cracks were not caused by the nearby construction works, and “do not pose any structural risks”. It added that water under the road base has since been drained..

When the Straits Times arrived at the scene at 10.30am, the roads were cleared and construction workers were seen near the area of the crack.

Personnel from the Public Utilities Board and LTA were also spotted assessing the situation.


Ms Ong, a motorist who was affected by the traffic jam, said she left her home in Lorong Chuan at 7.30am and ended up being "very late" for her 8am meeting with her friends.

Said the 44-year-old housewife: "The jam was so terrible. My car was going up (due to the uneven ground) as I drove past the area (with the cracks). It was very dangerous as no one knew what was going on.

"Fortunately no one had an accident."

A civil engineer who declined to be named said the cracks were likely to have been caused by soil movements below the road related to nearby construction works.

He said the rain might have contributed to the "loss of ground... by draining away soil, thereby weakening the site".