The clerk that saved the prison's death register

May 06, 2018
There was once a gaol clerk who risked his life to secretly record and save the name list of those who are executed or died in Outram prison, and even let POWs copied the name list secretly on the pages of the Bible.

Today we would like to pay tribute to this man and publish this name list of the 1470 deaths who are buried in mass trenches in Bukit Brown.

On 12 Sep 1945,  not so long after the war ended,  The Australia Morning Bulletin published the prisoners' stories of Singapore Gaol Horrors, describing Outram Gaol as the Blackest Spot of All" 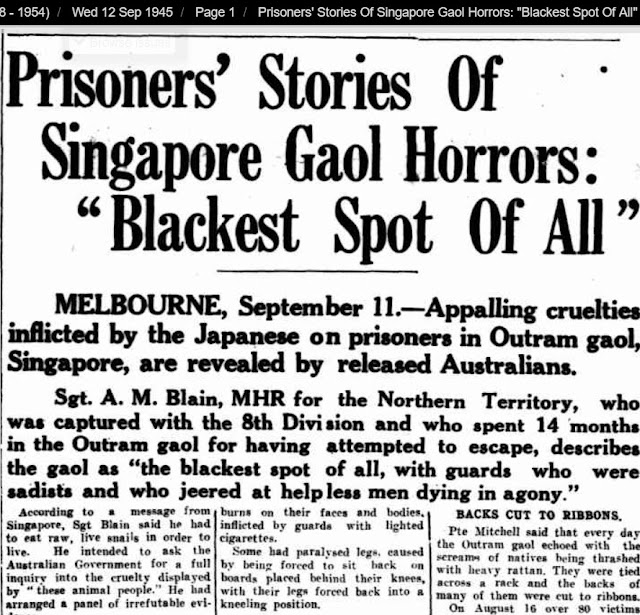 It was reported that Pte A. K. Mitchell, of Seymour (Victoria) and a British doctor copied death records on the pages of a Bible belonging to a friendly Chinese gaol records clerk.

Pie Mitchell said that in the 15 months from May, 1944, up till July this year 1136 natives died
of starvation and disease. In the two years up till July this year 142 Chinese were hanged.
Pte Mitchell described the hanging of the Chinese as shocking.
Their courage, he said, was amazing. Most of the Chinese were men and boys. Some were hanged for listening to Chungking broadcasts. One lad of 17 was hanged because he had donated 50
cents to the British Spitfire fund before the Japanese invaded.

Who was this friendly Chinese gaol record clerk who let the POWs copy death records on the pages of his Bible at the risk of his life?


On 23 Feb 1946,  there was an important article published in Straits Times.   It was a name list of 1470 prisoners who died in the Outram Road Gaol (Civilian) during the Japanese occupation.

This list was secretly by two people employed in the gaol.  The list was kept in English and it is possible that some of the names differ slightly from their Chinese equivalents as there is a variety of ways in which Chinese names can be romanised.   As the Japanese did not let relatives or friends know the fate of those who are arrested, it is probable that most of the people in this list are among those posted as "missing, fate unknown" 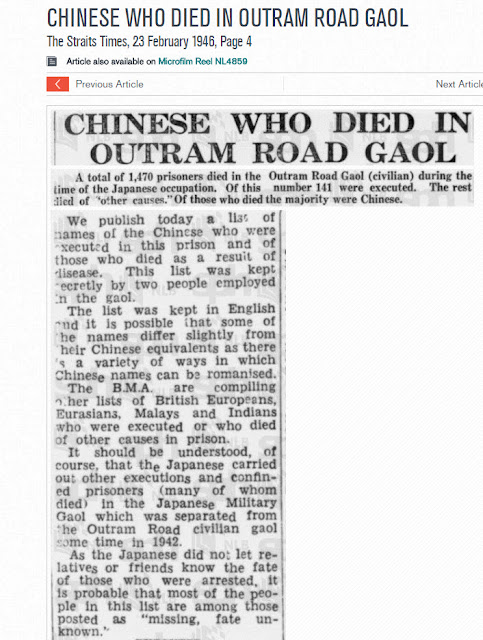 Some time later during the war crimes trial for the Outram Road Civil Gaol Crimes, the name of the prison clerk who had saved the register of the prisoner with its grim record of 1,000 deaths was make known and complimented.  He was Mr Benjamin Cheah, Chief Records Clerk at Outram Road Gaol, before and during the occupation. 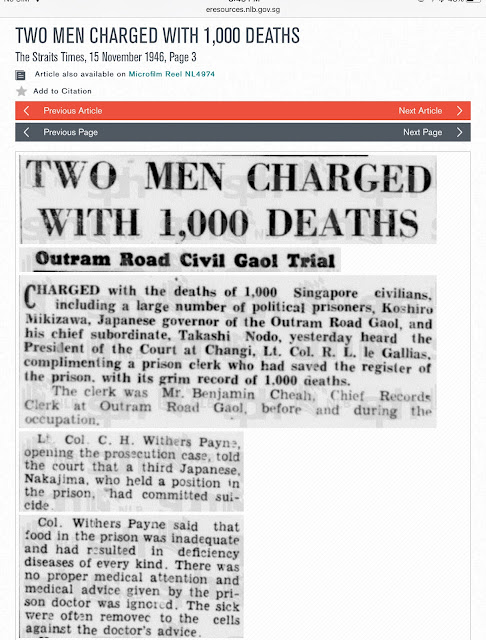 Who was this Benjamin Cheah who risked his life to secretly saved the name list of those who are executed or died in the prison, and even let POWs copied the death records on the pages of the Bible? 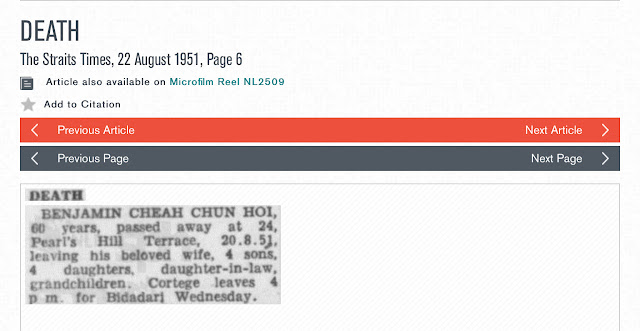 Benjamin must have rose through the ranks.  On 1 Apr 1908, when he was just 17 years he joined as an Extra Clerk in the Chinese Protectorate.  At that time Ho Siak Kuan was the Chinese Translator and Interpreter.

On 24 May 1990, Mrs Cheah, Benjamin wife,  passed away at age 88 and was survived by her sons Dick and Andrew and daughters.

Dick Cheah (Benjamin's son), a nursing officer, married Kate in 1976, and together they have 2 sons.
Mrs Kate Cheah is actually the daughter of the founder of Polar Cafe, Chan Hinky
(Now Polar Puffs and Cakes).

They have met each other as early as 1950/51 whereby the Chan family was staying temporarily in Pearl's Hill Terrace, where Kate eldest sister 's husband was working as an interpreter in Outram Gaol.

According to Mrs Kate Cheah's book "Sweet Memories, Sweet Success",  Dick forefathers had been part of a minority Chinese exodus that went to British Guiana to seek a better life.   Benjamin, Dick's father was born there but came to Penang when he was still a teenager. He then came to Singapore to work.

The Name List secretly recorded in English by Benjamin Cheah 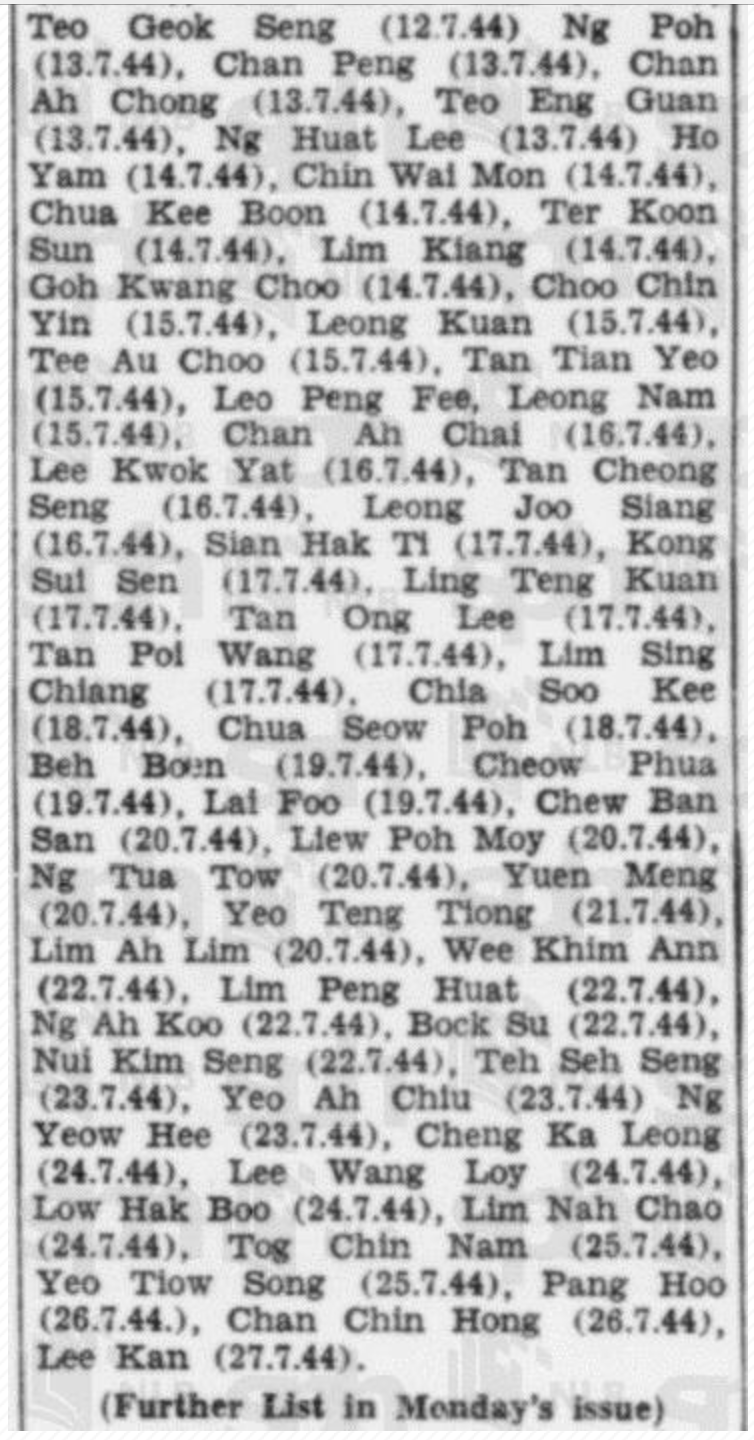 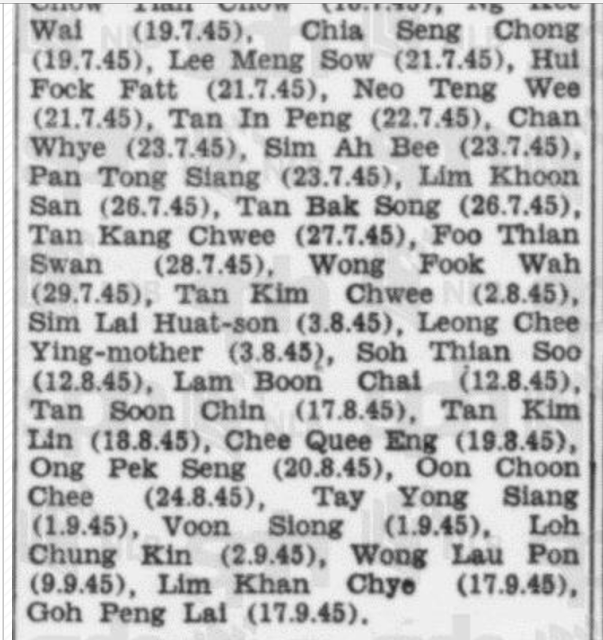