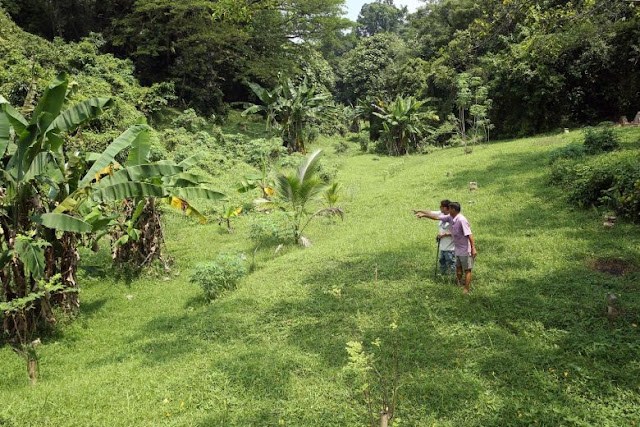 Tomb researcher Raymond Goh (back) with tomb keeper Soh Hung Seng at a valley at the Block 4 area of Bukit Brown Cemetery, where some people believe war victims might lie. More research and archaeological work need to be conducted.ST PHOTO: SEAH KWANG PENG

Hidden beneath the dirt of Bukit Brown Cemetery are the remains of thousands of men, women and children unceremoniously dumped into unmarked graves, the victims of a brutal war.

Historical records tell of trucks with bodies piled high in the back, and witnesses described how medicos would lift the bodies on stretchers, one by one, before tipping them over into open pits.

But this was known to historians. Now one man's obsession with clawing through old records to tell the stories of the forgotten has unearthed another tragic tale.

Somewhere in Bukit Brown Cemetery are dumping grounds for almost 1,400 civilians who died in the lesser-known Outram Gaol prison during the Japanese Occupation.

Tomb researcher Raymond Goh made the discovery after matching the names of the 1,400 people, mostly civilians, who were executed or died from diseases at the Outram Gaol prison, to Bukit Brown's burial registry. Their names were published over three days in The Straits Times in February 1946.

His finding is supported by other records which note the existence of mass graves at the site, and dovetails with other research and accounts.

Bukit Brown burial records show that during the Japanese Occupation, Singapore Municipal Commission lorries used to dump the bodies of the war dead there.

And in a 2012 book on his war experience, an Outram Gaol survivor, Australian prisoner of war Billy Young, said he and a friend saw 30 or 40 corpses piled together in a truck at the cemetery in 1942. The workers told the pair that three to four such trips were made to the cemetery daily.

If Mr Goh's finding is confirmed by archaeological evidence, it would be the first major discovery of a war grave since more than 400 urns holding the remains of war victims were found in the Siglap area in 1962.

As of now, no remains have been dug up yet and more research needs to be done to to locate where the 1,400 are precisely buried.

The Outram Gaol prison stood at the foot of Pearl's Hill before it was demolished in 1963.

Archaeologist Lim Chen Sian said that to narrow down the site of the mass grave or graves, more archival work and interviews with witnesses need to be conducted. Mr Lim said: "It would only be respectful to account for the people who died in the war and lay the victims to rest properly."

Some clues suggest the graves may be at Block 4 at the cemetery.

One of Bukit Brown's tomb keepers, the late Mr Soh Gor Tong, witnessed bodies being dumped into communal trenches around that plot of land. Born in the 1920s, Mr Soh worked in the cemetery all his life. He died in the early 2000s.

Mr Soh Hung Seng, 65, said: "My father saw the lorries with the bodies... he would run and hide.

"After the war, when people asked why these plots weren't better utilised for other burials, he would say it was because they held the bodies of the war dead who were dumped into trenches."

Bukit Brown volunteer Simone Lee, 36, said the burial registry indicates that mass burials took place at the cemetery from 1941 to 1946, and Blocks 1, 2 and 3 were presumably full by the time World War II came around. The next available area for mass trenches would be at Block 4, she added.

The burial registry indicates that from Dec 9, 1941 to Feb 8, 1942, the total number of the war dead buried in communal trenches at the cemetery stood at 848. The Japanese formally surrendered only in September 1945.

Mr Goh said: "In the chaos, many bodies were dumped, and families who were themselves incapacitated by the war could not always claim the bodies."

The researcher's 2016 discovery of a war memorial in Choa Chu Kang Cemetery, which housed the remains of several Chinese who died during the Occupation, resulted in the authorities working to document, retain and relocate it.

Mr Goh urged the authorities to dedicate resources to strengthen World War II research at Bukit Brown and its surrounding areas "so that the deaths of the thousands of victims, many of whom were tortured brutally, are not in vain".

Reports of torture and hangings

Some Chinese prisoners in Outram Gaol were hanged just for listening to broadcasts from mainland China, said Australia's The Morning Bulletin on Sept 12, 1945.

In another incident, a 17-year-old boy was hanged for donating 60 cents to the British Spitfire fund before the Japanese invaded.

According to the same report based on an account by Australian private A.K. Mitchell, who had survived imprisonment in Outram Gaol, hangings were "clumsy affairs".

The report said that many bodies were mutilated as the Japanese could not properly work the triple gallows. Executions were always watched by Japanese officers "seated on chairs laughing and joking".

Private Mitchell said the Outram Gaol echoed daily with the screams of natives being thrashed with heavy rattan. Prisoners were tied across a rack and the "backs of many of them were cut to ribbons".

The guards would also drag prisoners into cells and practise jujitsu on them, "slamming them into unconsciousness on the stone floors", said the article. Men were bashed on the slightest provocation and "every man who died was murdered".

The report further stated that at least 14 British, Australian and Dutch soldiers either died or were executed in the prison.

The Gaol's prisoners were described as being in bad shape. "Their eyes gazed blankly from their sockets and their skin was stretched tightly over their skeleton frames. They had ghastly tropical ulcers and unkempt, matted hair, and bearded, yellow faces."