UPDATE: There was one claim by next-of-kin for the human remains since 12 January 2018, the Land Transport Authority said.

About 3,400 unclaimed human remains exhumed from the Bukit Brown and Seh Ong cemeteries will be scattered at sea next Thursday (26 April).

“There were no claims by next-of-kin since 12 January 2018,” said a Land Transport Authority spokesperson (LTA) on Sunday in response to queries by Yahoo News Singapore.

A brief religious ceremony to offer prayers before scattering the ashes at sea will be arranged by the LTA.

In a series of final notices published on 12 January in The Straits Times and Lianhe Zaobao, the LTA had called for descendants or next-of-kin to claim the remains by last Thursday (12 April).

These remains were not claimed by descendants or next-of-kin at the time of exhumation and during the storage period of three years, according to the notices. 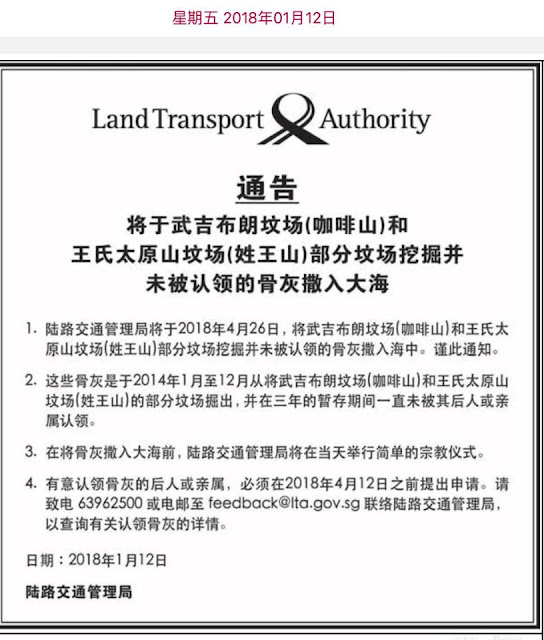 (A notice by the LTA published in Lianhe Zaobao on 12 January, 2018. Source: Raymond Goh/Facebook)

More About 4,700 graves were exhumed from both cemeteries between January and December 2014 to make way for the construction of Lornie Highway.

The construction of the highway, which was announced in September 2011, was delayed twice due to various reasons, including financial difficulties faced by its main contractor and a public exhumation exercise that completed a year later than projected.

First slated to be completed by 2016, and then end-2017, the development of the dual four-lane road also faced strong objections from heritage groups and members of the public.

Set to connect MacRitchie Viaduct to Adam Flyover, it affected parts of the Bukit Brown and Seh Ong cemeteries, which had been closed off to burial since the early 1970s and were areas deemed to have rich heritage value.

Lornie Highway will now be progressively opened from the third quarter of this year, starting with the southbound highway towards Adam Flyover, said the LTA in a press release issued in November last year.