Commentary: Cemeteries should be more than where the dead reside

In land-scarce Singapore where taller columbaria have replaced cemeteries that used to take up large tracts of land, the University of Liverpool’s Terence Heng discusses if we’ve lost something in the process. 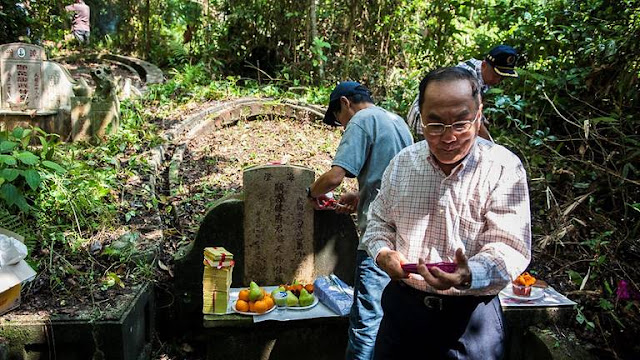 The filial come back every year to do their duty. (Photo: Terence Heng)

SINGAPORE: When I tell people that part of my research involves photographing exhumations in cemeteries and their accompanying rituals, the inevitable question I get is: “Have you seen or felt anything?”

To be honest, I have not.

However, I once thought I heard a child crying outside my bedroom. Thinking that something had finally followed me home, I jumped out of bed to confront the spectre.

It turned out to be my foster cat, throwing up under the dining table. I almost wished it had been a ghost.

Aside from ghostly-feline shenanigans, the time I spent in Bukit Brown Cemetery between 2011 and 2014 has shown me just how alive cemeteries can be.

As part of the team documenting the social and cultural life of the cemetery, I was witness to a multitude of rituals, festivals, events, memories and emotions.

Many of these memories and emotions were personified in the determination of the people I met along the way.

Take for example Qing Ming Jie – the Chinese version of All Saints Day, when families gather to pay respects to their ancestors.

I once photographed a man who went by Mr Taijuddin, who now mostly resides in Indonesia. At the age of 73, he still climbed the slippery, moss-covered slopes in business shoes and a long-sleeved shirt to do his filial duty.

BEING PHYSICALLY CLOSE TO A LOVED ONE’S GRAVE

The ability to be physically close to a grave is one advantage that cemeteries have over columbaria. Even if you paid for a niche at eye-level, there is nothing quite like having your own space to say a few words or conduct religious rites.

Cemeteries also provide a more personal way of interacting with loved ones. 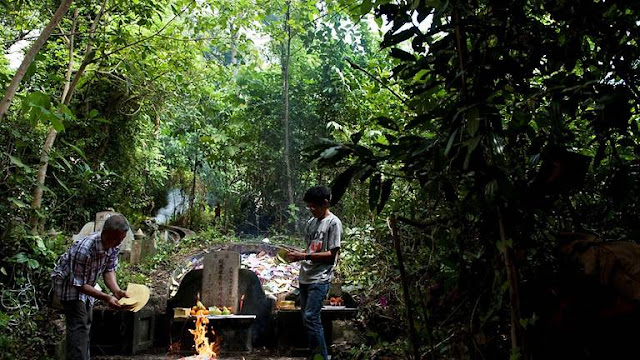 One friend commented that when visiting his grandmother’s niche, he was never sure if she could “receive” his offerings on the ground since her ashes placed were far above eye-level. Waving his hands, he mimicked pushing the spiritual essence of offerings up, saying “we hope ah ma gets these lah”.

The destruction of cemeteries has become a contentious issue in Singapore. What was once a norm to see entire swathes of graves cleared for malls, MRT depots and housing estates can be a fiercely contentious issue, especially for those that have significant cultural and historical value, like Bukit Brown Cemetery.

More recent exercises like the Government’s plans to clear 80,000 graves to make way for Tengah Air Base’s expansion have been met with a range of reactions, from a mere shrug to disappointment that national development is coming at a cost to the dead.

Many argue that cemeteries are impractical – there is no way to leave that much space for the dead when the living are already squeezed into ever smaller pigeon holes.

We are told that we cannot be sentimental, that we must be pragmatic.

In place of cemeteries we have ever-more intensifying columbaria, designed to accommodate the most number of remains using the least amount of space. The recent announcement of a funeral complex in Bidadari to replace the columbarium complex at Mount Vernon is an example of this.

Such arguments and actions are less about cemeteries, and more about what constitutes a “useful” and “efficient” space – planners are always looking for ways to make spaces more livable, effective and beneficial to the population. Dead bodies and remains don’t seem to figure in this equation. 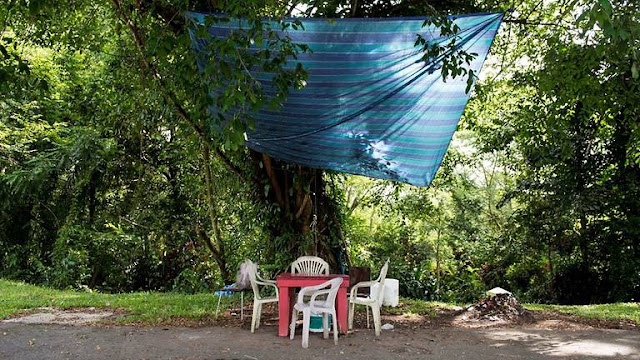 The other side of the argument is that cemeteries are alive with memories, rituals and personal stories, that they are an important connection to our past in ways that single memorials or buildings could never act as.

Again, these are less about cemeteries and more about what makes a space meaningful, and what kinds of spaces can anchor us to our social, cultural and national identities.

Both sides of the argument make good points. We have limited land but to eliminate seemingly inefficiently used spaces that are material anchors leaves us empty and undefined. What then do we do?

NOT A “DIRTY” SPACE

We can begin by not seeing cemeteries (or indeed any space that houses the dead) as places that are spiritually off-limits or set-aside for most of the year.

Colloquially speaking, they cannot be framed as “dirty”, "inefficient" or "useless" spaces.

Intensifying a columbaria suggests that we see no use for such spaces other than a repository and somewhere to visit once or twice a year.

To do this, it means we need to collectively think of and talk about death more candidly. As long as death is taboo, so too will be the spaces associated with death.

Death needs to, in millennial-speak, be disrupted in ways that allow us to more fully engage with it as a process of life.

If we go ahead and clear all cemeteries, the alternative needs to be more imaginative than simply stacking us one on top of the other in the easiest and most cost-effective way possible. By this I do not mean fancy air-conditioned country-club style designs with lasers.

Rather, constructing spaces that encourage contemplation and give a sense of refuge would be a good start. Somewhere we can think about what life really means to us, far away from the hustle and bustle of life, as we take time to visit those who have gone before us.