The Sikh guards of Bukit Brown 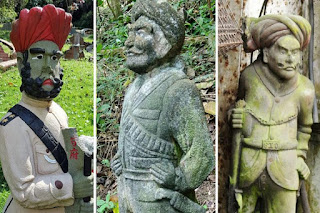 The statues of Indian guards, many of them Sikhs, loom over several tombs at Bukit Brown.

Officially established in 1922, this was a cemetery for the Chinese and approximately 30 pairs of these watchmen stand out among the ornate tombs.

Sikhs have been part of Singapore’s cultural, ethnic and political landscape since the early 19th century.

Originally from Punjab, India, many of them initially came to take up jobs in the army and police force.

Tall and muscular, with commanding personalities and a reputation for honesty and hard work, the Sikhs took on the additional roles of watchmen and bodyguards to the wealthy.

They were popularly known as jagas — Malay for guards — and were looked upon as brave and dependable.

In colonial Singapore many wealthy Chinese erected statues of Sikh guards at their tombs. 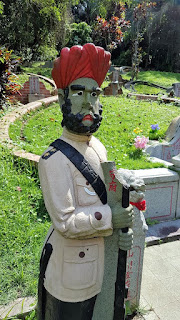 They played the role of guardians of the final resting place of these rich towkays.

These guards are an evidence of the social interaction among immigrant races in colonial Singapore.

There are some who show a hint of age with slightly protruding bellies, casually tucked out shirts and a slight smile on their faces.

Others stand tall and erect with piercing eyes and no-nonsense demeanour.

From the folds of the turban to the curls of the beards, these sentinels are life-like with incredible attention to detail.

On closer inspection, one notices that not all guards are Sikhs. Though some are depicted with turbans and sport moustaches, many are clean shaven.

Only some of the statues carry the kirpan (small sword). Among other things, Sikhism requires its followers to maintain a beard and carry a kirpan.

The guards were always made in pairs, replacing the traditional Chinese warrior gods who were erected to protect the dead from harm.

Closed in 1973, Bukit Brown lay relatively forgotten until 2011, when plans were announced to redevelop it and build roads and residential buildings.

It was expected that some graves with the Sikh guards were among those which would be affected.

In response to queries, a National Heritage Board spokesman told tabla! that, “only one grave with a pair of Sikh guard statues was affected by the road development through Bukit Brown Cemetery”.

“Following an assessment of its heritage value, the pair of Sikh guards is now part of the national collection under the care of the National Heritage Board.”

Mr Ishvinder Singh, 30, a third generation Singaporean, said he had no idea about the existence of these guards and was taken aback when he saw the pictures in 2011.

As a practising Sikh, he immediately identified with them.

“This was a time when I was having conversations with myself about my Sikh roots and Bukit Brown popped up.” said Mr Singh who is working as a project engineer in the US.

Creating the Sikh Heritage Trail, a free app, to interactively visit Sikh places of interest in Singapore, was an idea that germinated in Mr Singh’s mind.

A STORY OF OUR SHARED HERITAGE

One of the trails featured in the app is the Sikh guards of Bukit Brown.

He was helped in his research by Ms Vithya Subramaniam, 28, who is currently a teaching assistant at the National University of Singapore.

Said Mr Singh: “In this process, I reconnected with the Singapore story where Bukit Brown reminded me what it is to be a Singaporean; that we are willing to invite, embrace and accept differences, even taking them to our graves. Ultimately, I reconnected and reclaimed a Sikh identity that embodied a narrative closer to South-east Asia.”

Said Ms Subramaniam: “We have no hard evidence about where these statues came from.”

But, judging from the design elements and workmanship, she believes they were probably made by craftsmen in China and imported to Singapore by affluent Chinese Singaporean businessmen with the rest of the tomb materials.

The pioneers of Singapore entrusted their wealth and their lives to these trusted guards who will guard their masters in death as they had done in life. 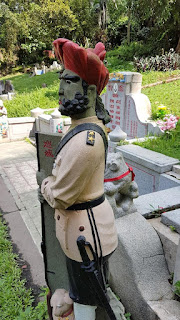 This is the tomb of Chinese physician Chew Geok Leong (d. 1932).

These Sikh guards protect what is undoubtedly the most photographed and well maintained of all the tombs at Bukit Brown.

They wear formal uniforms and apart from the gun, also carry a ceremonial sword (kirpan).

Mr Fabian Tee, a volunteer Brownie, pointed out that each guard had a role assigned to them as shown by the words painted next to the muzzle of the gun.

While one was a patroller, the other was a sentry.

Interestingly, the tomb and the guards were imported from China by Mr Chew and kept in his home, awaiting his passing. 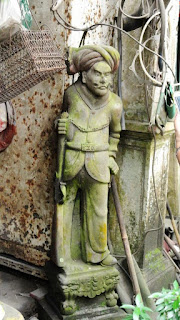 The tomb of Mr Tan Boon Cheng is unique as it is housed in a crypt, an underground room or vault.

The two guards here are surrounded by household items of the caretakers who live within the building.

Having been sheltered, the stone is smooth and the detailing clearly visible.

Although the paint has faded, evidence of it still remains especially on the guards’ turbans.

Both guards are non-Sikhs and the caretakers refer to them as “Bengalee” —- a term commonly used in the olden days for Indians who arrived in Singapore after crossing the Bay of Bengal.

Note that the letters on the guard’s buckle seem to have been written upside down.

GUARD WITH A KIRPAN 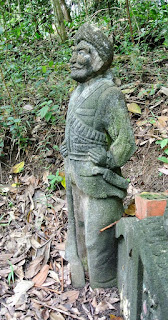 Mr Peter Pak stands beside the statue of a Sikh guard at the grave of Mr Lim Kow Nah.

The statue is about 2 feet tall (about 60cm). Most guards are between 2 feet and 6 feet in height.

Notice the kirpan on the guard’s waist.

On the other side is a water pouch. 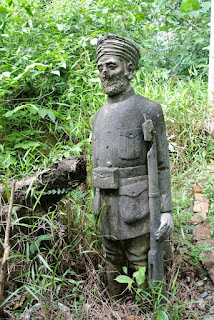 Though heavily eroded, this is a guard with Malay/Chinese features, and he watches over the grave of Mr Teng Bin Chai.

Unlike the others, it is made of concrete.

The broken parts of the gun and the metal rod jutting from the top of the gun, lend credence to this belief.

The eyes are rimmed with red paint and the colour may have been added at a later date to make the guard look fierce. 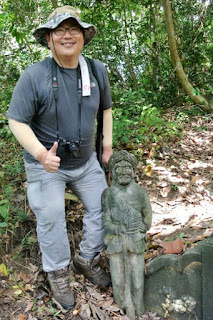 All Things Bukit Brown is a group of volunteers collectively known as the Brownies, who have been collecting, researching and documenting information about the cemetery.

They regularly conduct walking tours to educate people about this part of Singapore’s history.

Mr Peter Pak, 44, (above) is a senior project manager with the National Library Board. In his spare time, he volunteers as a Brownie.

Mr Pak has extensively documented and photographed the Sikh guards for the last six years in his blog, Rojak Librarian. 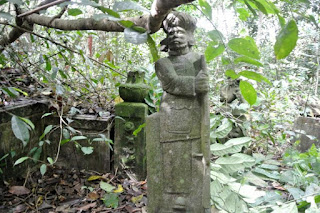 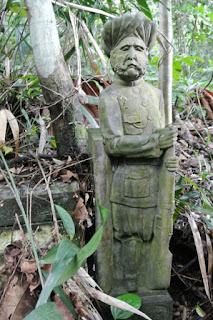 The folds of the turban, creases in the dress, baggy trousers and stern demeanour show why Sikhs were given the job of protecting the dead.

The chain running from the button to the pocket may have had either a whistle or a watch at the other end. 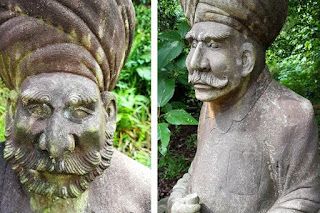 The grandest and largest tomb at Bukit Brown is that of Mr Ong Sam Leong (d.1918), a labour contractor.

The faces of the guards are almost identical except that one has a beard and is a Sikh, while the other only has a moustache.

They have their turbans tied up high with their ears exposed.

They also look more relaxed, with gentler features and hints of a pot belly.

Among the Sikh guards discovered so far at Bukit Brown, this pair is presumed to be the oldest. 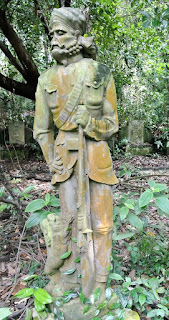 The detailing here is exceptional, from the folds of the turbans to the pocket flap, the ammunition belt and heels of the shoes.

GUARDING FROM THE BACK 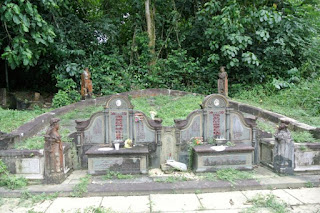 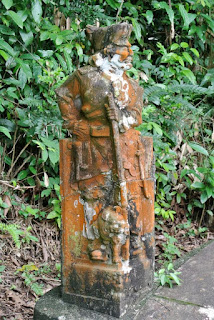 The tombs of Mr and Mrs Seet Tiang Seng have a unique feature in that the guards stand at the back overlooking the graves.

No Indian guards have been found on tombs built after 1945.

However, in this case the grave with the guards was already there and the burial took place later.

(Left) a close-up of the guard. He has a stern expression and carries a sword as well as a gun.

At his feet are Chinese mythical foo dogs, to ward off evil spirits.