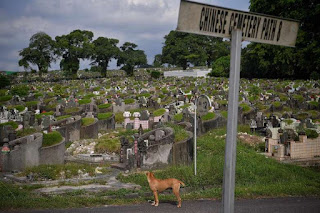 
Singapore's biggest and only active public cemetery - Choa Chu Kang Cemetery - will have its size cut down by a third, from 318ha to 200ha.

Some 80,500 Chinese and Muslim graves will be exhumed progressively to expand Tengah Air Base, which in turn is to accommodate the relocation of Paya Lebar Air Base from 2030 onwards.

Those affected can have their relatives' remains cremated at Choa Chu Kang Crematorium.
For those whose religions require their dead to be buried, like Islam, the remains can be reinterred elsewhere in the cemetery.

The authorities will pay for the moves, though additional rituals or requirements will have to be borne by the affected relatives.

Owing to space constraints, the Government in 1998 imposed a burial period of 15 years for all graves in Choa Chu Kang, after which the remains would be exhumed.

Since December 2004, the National Environment Agency (NEA) has been exhuming graves at the 70-year-old cemetery in phases.

This is the largest exhumation there to date, though there have been larger-scale ones at other cemeteries, such as in Bishan or Bidadari, which made way for new homes and towns.

The NEA said it will continue to exhume graves which have met the 15-year burial period to ensure there is sufficient supply to meet burial demand.

"While there is sufficient land in the foreseeable future, NEA will continue to work with land use planners to explore options for future generations," it said. 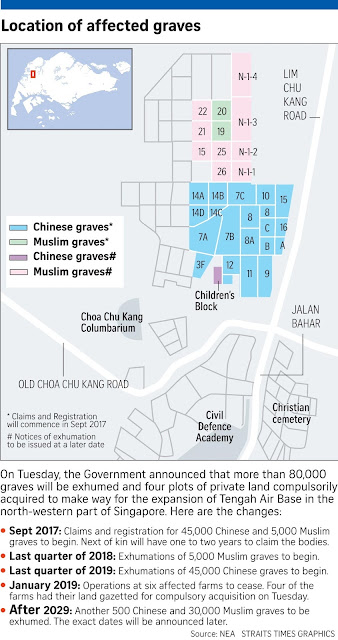 In 2007, it introduced a new interment system for Muslims, where concrete crypts built below ground replaced traditional earth plots.

Modelled after similar graves in Saudi Arabia, the system helps to save space as it allows the bodies interred to be arranged in a more compact way, and was reported to help keep the grounds open until at least 2130.

The latest round of exhumations will take place in several phases.

About 45,000 Chinese graves and 5,000 Muslim ones older than 17 years will be exhumed first, with the earliest beginning in the last quarter of next year.

Newer graves - with some buried as recently as three years ago - will be exhumed later, after they meet the minimum 15-year burial period.

Yesterday, retiree Norani Masuni, 59, whose sister's grave at the N-1-3 plot will be eventually exhumed after the burial period, said: "We feel sad, but what can we do? A decision has been made."

She said it is likely that her sister's remains, which were buried six years ago, would be buried with other family members.

"It has happened to us before at other graves, so we are prepared for this," she said.

Chua Chu Kang GRC MP Yee Chia Hsing, whose Nanyang ward includes the air base, said he believes that while the changes may be disruptive, most will take it in their stride as they are aware of the land constraints in Singapore.

"That is why those who can accept it will have their loved ones cremated, while those who bury their relatives know full well it cannot be for forever," he said.