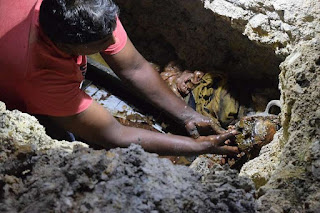 The gravedigger has to sift through mud, soil and other debris with his bare hands to recover the remains. PHOTOS: FONG CHUN CHEONG

Armed with power drills, workers may spend up to three hours to get through the soil in an exhumation, but once the gravedigger gets into the coffin, it is just bare hands.

The gravedigger's hands are recognised as the only tools of a dying trade delicate and thorough enough to retrieve the bones, exhumation companies shared with The Sunday Times.

The 10 or so Singaporean gravediggers - there were 50 in the past - will be kept busy with a mass exhumation that needs to be carried out at the Choa Chu Kang Cemetery. Some 80,500 graves will be exhumed for the expansion of a military airbase in the north-west.


Mr Johnny Tan, 69, the third-generation director of Chua Chu Kang Marble Company, said the cost of private exhumation can be more than $1,000 per grave.

Industry players estimate that public exhumation costs are usually kept between $100 and $300.

Workers are typically hired by companies for the more manual task of removing the soil.

The experienced gravedigger has to climb in alone, usually with an electric saw to gingerly remove remnants of the coffin. Then, he will sift through the silt, mud, soil and other debris with his bare hands.

Mr Jeffrey Lee, sales and marketing manager of Singapore Casket which outsources the work to exhumation companies here, said: "They have to use their bare hands to find and extract fragments of bone and teeth which are sometimes stuck in the soil.

"Sometimes families remember that their relative had a gold tooth. It's like looking for a needle in a haystack. I really have to salute them (the gravediggers)," said Mr Lee.

Mr Fong Chun Cheong, a Yin Fengshui practitioner who conducts rituals for families and charges $2,888 for his exhumation package, said: "When the coffins are uncovered, the contents can look messy. It's not an easy job."

Workers then rinse the remains and carefully bag them before they are handed over to the National Environment Agency. The remains are then cremated.

Relatives are usually present at the start of the process and at the end when the ashes are re-interred into a columbarium. The whole process can be completed within 12 hours.

With the dearth of local expertise, industry players said most of the public exhumation work is handled by foreign workers.

Almost all Muslim exhumations are handled by the Government. In the case of the upcoming exercise, the Islamic Religious Council of Singapore will inform family members when to register and head down to witness the exhumation.

No rituals are conducted. The remains are then re-interred in the ground at another site following a short prayer.

Mr Raymond Goh, who studies tomb inscriptions, hopes that companies handling both the public and private exhumations of the Choa Chu Kang graves will document the attached tombstones before they are exhumed.

Mr Goh said: "A simple photo of the tombstone and inscription will provide a more lasting connection for future generations searching for how their ancestors were once buried and remembered."
News