Live Your Dream (Ep 4): The missing link between the living and the dead

SINGAPORE - "We are not makers of history, we are made by history." Yet, how many of us are aware of our ancestry? Fifty-two-year-old Raymond Goh's dream is to help everyone trace their lineage. 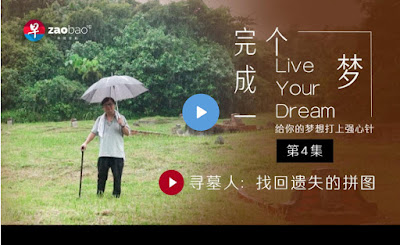 52-year-old Raymond Goh loves getting his hands dirty by uncovering graves. Can he solve the century-old puzzle and find the descendants of the late Singapore Chinese pioneer Neo Chan Guan?

Mr Goh, the director of a pharmaceutical company, loves getting his hands dirty: His favourite pastime is digging graves.

Mr Goh, together with his brother Charles, 50, founded Asia Paranormal Investigators (API) back in 2005. Their main goal is to locate and identify graves, and from there, take a deeper look into Singapore's history.


Throughout the years, the brothers have rediscovered many graves of Singapore’s pioneers whose names adorn our roads and buildings, such as Joo Chiat and Boon Lay. They also offer to help families locate the resting places of their ancestors, completely free of charge. Their meticulous work has since earned them the title "Tomb Hunters".

In recognition of his heritage work, Mr Goh was even shortlisted as an Outlook Inspiration by BBC and was among the top 15 of 50 inspiring people from around the globe.

"Every stone tells a story," is what motivates the brothers’ quest in leaving no grave undiscovered.

For four years, Mr Goh dedicated his free time to finding the tomb of one of the first Chinese pioneers in Singapore back in the 19th century - Neo Chan Guan.

Neo Chan Guan was the main contractor behind national monument Chong Wen Ge. The pavilion in Telok Ayer, believed to be built between 1849 and 1852, was gazetted as a national monument, along with the Thian Hock Keng temple. After four years, Mr Goh finally discovered the 164-year-old tomb in Bukit Brown. He hopes to find Neo Chan Guan's descendants and bring them to their ancestor's grave.

It is known that Neo Chan Guan was one of the founding members of Keng Teck Whay. Unfortunately, Keng Teck Whay does not hold any information regarding his direct descendants.

Host Ken Low even resorted to publishing the story in the newspapers to broaden the search.

Can Ken beat the clock and solve the century-old puzzle? Watch the video to find out.

"No dream is too big and no dreamer too small." If you have a dream waiting to be fulfilled, e-mail the "Live Your Dream" team at zbevents@sph.com.sg.

For more stories on "Live Your Dream", please visit:  www.zaobao.com/zvideos/live-your-dream

There is a Chinese saying 富不过三代 – that is riches or legacy does not pass 3 generations. What it implies is that if the descendants does not treasure what the ancestors left behind,  usually the wealth will dissipate after a few generations. It is also a reminder to the descendants to treasure, safeguard and if possible expand upon what the ancestors has left behind. Sometimes people will try to break this saying by ensuring that fortune will pass down the generations, even pass the 3rd generation. ---- It was the year 1982. An obituary notice was published in the Straits Times for a grand old lady who died at the age of 91.  Few people at that time knew this lady was tied to the tides an…