Here Lies a Graveyard Where ‘East and West Came Together 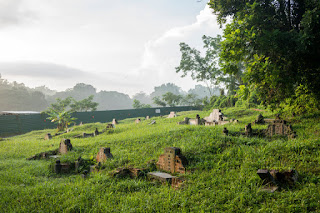 Graves in Bukit Brown in Singapore. The government plans to level the cemetery eventually, but a group is working to preserve it. Sim Chi Yin for The New York Times

SINGAPORE — In the middle of this island nation of highways and high-rises lies
a wrinkle in time: Bukit Brown, one of the world’s largest Chinese cemeteries.
Now neglected and overgrown, it offers an incredible array of tombstones,
statues and shrines just four miles north of downtown banks, malls and regional
headquarters.

For years, the 213-acre site was a destination for Halloween thrill seekers and
bird watchers, a haven of green in an overcrowded land. But in recent years it has
become something much more powerful: a pilgrimage site for Singaporeans
trying to reconnect with their country’s vanishing past.

That has put Bukit Brown at the center of an important social movement in a
country that has rarely tolerated community activism: a battle between the state,
which plans to level part of the cemetery, and a group of citizens dedicated to its
preservation.

Surprisingly, in a culture of relentless modernization, its advocates are
scoring some successes in limiting damage to the cemetery and raising
consciousness about the island’s colorful history.

Built in 1922, Bukit Brown was the final resting place for about 100,000
Singapore families until it was closed in 1972. Its importance is greater than its
relatively recent 50-year history implies because many historic graves were
relocated there from other cemeteries that were paved over.

Add in an abandoned cemetery next door for a prominent Chinese clan, and
experts estimate that up to 200,000 graves are sprinkled amid the surrounding
rain forests, including those of many of Singapore’s most famous citizens.

“You have to think of the cemetery as an amazing historical archive,” said
Kenneth Dean, head of the Chinese studies department at the National University
of Singapore. “But given how things have developed recently, I have deep
concerns about how long it will survive.”

Those worries have to do with this city-state’s insatiable appetite for land.
Singapore’s 5.7 million residents live on 277 square miles, a bit less than the area
of New York City, but the land has to accommodate more than a municipality’s
needs. It must hold the infrastructure of a country, including military bases,
landfills, reservoirs, national parks and one of the world’s busiest airports and
harbors.

More than 20 percent of the country is built on reclaimed land, leading its
two immediate neighbors, Malaysia and Indonesia, to ban the export of sand to
Singapore in order to protect their own land. And with plans calling for
Singapore’s population to increase to 6.9 million by 2030, land is at a premium.
Part of the solution has been to look inward. In 2011, the government
decided to smooth out a bend in the island’s north-south highway by cutting
through Bukit Brown. Soon after, the government announced that within 40
years the rest would be paved over, too.

After watching many of their best-known monuments and neighborhoods
leveled over the past decades, Singaporeans began to take action — a turning
point that people here compare to the 1963 destruction of Pennsylvania Station, a
Beaux-Arts masterpiece in New York City whose loss catalyzed historic
preservation in the United States.

At their center is an informal group of two dozen volunteers who call
themselves “Brownies.” They offer free tours and run a website that details the
cemetery’s history and includes testimonials by locals and visitors.

One of the first Brownies was Raymond Goh, 54, a pharmacist who used to
lead Halloween tours around the cemetery. (As in many parts of the Chinese
cultural world, Singapore is obsessed with ghost stories and ghoulish legends.)
After a while, Mr. Goh began to read the inscriptions on the tombstones carefully
and was surprised at the antiquity of the graves.

“I noticed a lot of graves looked very old and, in fact, that some were from the
time of Raffles,” Mr. Goh said, referring to Singapore’s British colonial founder,
Sir Stamford Raffles. “I wondered, ‘How come nobody told me this was here?’ ”
When the government’s plans were announced in 2011, Mr. Goh and his
brother Charles wondered how to save Bukit Brown. They began training other
volunteers, including professors familiar with the world of academic research,
former journalists who help with public relations and business people who
provide community outreach and funding. In other words, it was a cross section
of middle-class Singaporeans who felt nostalgic about the lost city of their youth
and were eager to better understand their cultural roots.

Brownies have guided me through the site several times over the past few
months, and I thought it was indeed a marvel. The lush vegetation made us feel
cut off from the thriving modern city, while the tombstones were beautiful in
their own right, even without explanations.

Some are like mini-fortresses, guarded by stone Chinese or British lions, or
even Sikh soldiers. Others were decorated with Taoist and Confucian images and
symbols. Some told of the dead person’s loyalty to a political party or a lost
dynasty.

Thanks to explanations by guides like Ian Chong, a professor at the National
University of Singapore; Ang Yik Han, an engineer; Fabian Tee, a lawyer; and
Claire Leow, a former journalist, I began to understand how this city-state was
crucial to the British Empire’s Asian holdings.

We surveyed the enormous mausoleum of Ong Sam Leong, a supplier of
labor to the Christmas Islands, who died in 1917 and whose grave was relocated
here. I also saw the grave of Tan Kim Cheng, who introduced Anna to the King of
Siam, and those of revolutionaries who supported Sun Yat-sen when he was
plotting the ultimately successful downfall of China’s last dynasty
Many of the tombs were decorated with the distinctive tiles used by longtime
Chinese immigrants to these regions, while others showed the strong influence of
Malayan culture.

“This is where East and West came together,” Mr. Ang said. “We are standing
at the center of the island, the belly of the dragon, and we can’t let it be cut open.”
I couldn’t help but think of many of the world’s other great resting places. In
terms of trees and wildlife, Bukit Brown evoked Highgate Cemetery in London; as
a retreat from daily life it felt like Green-Wood in Brooklyn; and as a record of
one country’s famous people it was reminiscent of Père Lachaise in Paris or
Cementerio de la Recoleta in Buenos Aires.

For Professor Dean, these tombstones show the rich links between Southeast
Asia and specific regions of China. Under his direction, a team of researchers is
entering data from the gravestones into databases, allowing the development of
maps showing how clans and villages migrated from coastal China to these
faraway shores.

Recently, one of Professor Dean’s projects received government financing.
Although officials refused numerous telephone and fax requests for interviews
about the cemetery, they seem to be coming around to understanding its
importance.

Already, the government has yielded to some of the Brownies’ demands.
Originally, 5,000 graves were to be moved, but that number has been reduced to
3,700. And instead of pulverizing the tombstones, they are being cataloged and
stored in a warehouse. In addition, the government has set up a heritageassessment
board to review future projects.

This willingness to compromise seems to reflect a broader sentiment in a
society that has moved so quickly that people feel rootless and without deep ties
to their country.

During one walk through the cemetery, I met a Ministry of Defense official
who asked that only his first name, Pete, be used because of the sensitivity of his
position.

“Our nation is a young one, and we’ve been so focused on the future that we
sometimes forget the past,” he said. “Bukit Brown is a huge trove of stories.”