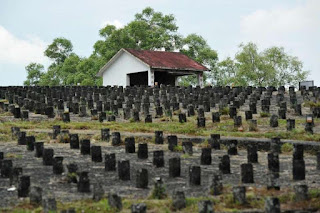 Some historical memorials and tombstones from a part of Choa Chu Kang Cemetery will be documented, preserved and relocated by the authorities, before the National Environment Agency (NEA) carries out the latest grave exhumation exercise there.

The research and preservation effort follows an appeal by tomb researcher Raymond Goh, who had conducted his own survey of the site last year and highlighted its noteworthy structures to The Straits Times in April. These structures include a 46.5 sq m World War II tomb memorial housing the remains of several Chinese who died during the Japanese Occupation.

With 35,000 graves in the cemetery slated for exhumation this month under Phase 5 of the NEA's exhumation programme there, the structures were initially in danger of being lost.

But the National Heritage Board, NEA and the Ministry of National Development will now be working together to research and document selected graves and historical structures there.

When asked, they told The Sunday Times they recognised the historical significance of the WWII memorial and "will work together to retain and relocate it".

The memorial is in memory of Chinese "patriot victims" killed in 1942, in a village in Little Bamboo Lane at the 5 1/2 milestone in Bukit Timah.

Other structures that will be studied are the mass Yeo family grave flanked by statutes of four Sikh guards and Chinese warriors, and more than 70 graves from the family burial ground of Straits-born merchant Tan Jiak Kim. Tan died in 1917 and has a street in River Valley named after him.
Mr Goh said he welcomed the move to study and preserve the tombs. He said the graves are remnants in memory of Singapore's early occupants and represent different eras of burial practices.

Many graves in the affected area were moved to Choa Chu Kang as a result of redevelopment. They were re-interred from defunct graveyards between the 1940s and 1970s with the aid of old clans, including those of the Huang, Chua and Lim lineages. Some graves date back to the 1840s.
Similarly, Mr Goh believes the WWII memorial could have been part of the private and now defunct Hock Eng Seng cemetery off Sixth Avenue, which housed the graves of many Chinese war patriots. The cemetery, which was close to the site of the 1942 massacre, was relocated to Choa Chu Kang in the 1990s.

Mr Goh said he hopes the authorities will consider retaining the structures in their original locations. If they have to be moved, he suggested clustering them within the cemetery in a memorial park.
Ms Jean Yeo, 61, who used to work in sales, had unsuccessfully appealed for the on-site preservation of her family's mass grave. She was disappointed by the outcome but said she is glad that the authorities are at least recognising and studying the history of her ancestors "so that all our present and future descendants will remember and cherish them through time in memory".
Due to land scarcity, NEA introduced a burial policy in 1998 to limit the lease of graves to 15 years. Graves which are 15 years or older are exhumed in phases. The latest phase was announced in July 2014.

The study aims to capture the ownership, architectural style, notable architectural, ornamental and religious features, and the physical condition of the structures and graves there, among other things.
The report will also record the tombs' inscriptions and epithets.