Bukit Brown gets back its 1920s gates 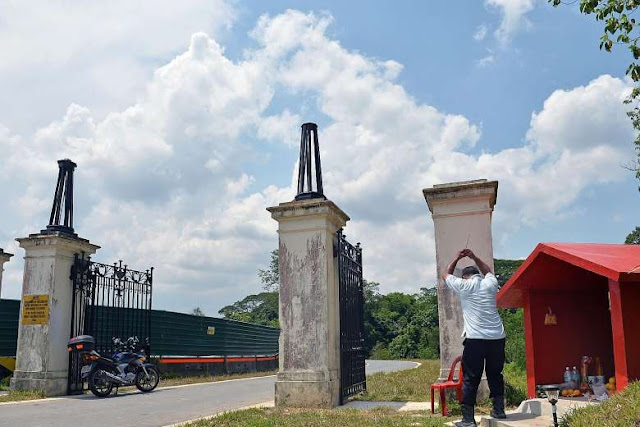 The cleaned and repaired gates were put back on their old posts at their new location - a new access road near Lorong Halwa.ST PHOTO: DESMOND FO

The historic 1920s cast-iron gates of Bukit Brown Cemetery have been carefully reinstalled after six months of conservation and refurbishment work.

The gates, perched on gateposts, now boast a shiny coat of black paint, a far cry from their previous state as badly corroded structures caked in layers of rust.


Years of exposure to the elements had resulted in paint deterioration, plant growth and corrosion.

The gates were reinstalled last week following the refurbishment project by a team from Fusion Clad Precision - a contractor hired by the National Heritage Board (NHB).

Ms Lee said other precautions taken included securing the gates with specially designed frames that came with strips of padding before installation.

"The gates were loaded and then off-loaded using an overhead crane vehicle."

The refurbishment was an initiative by a multi-agency work group that the Ministry of National Development chaired.

The group includes the NHB, the Land Transport Authority and civic organisations All Things Bukit Brown and the Singapore Heritage Society (SHS).

The heritage community is glad the gates have been reinstated.

He said: "Gates and doors demarcate and delineate boundaries both physically and conceptually. This is a symbolic entry way for Bukit Brown Cemetery, which does not have a fence or boundary wall."

All Things Bukit Brown co-founder Catherine Lim said that while the gates' fresh, new look will take some getting used to, reinstating the structure "is the first step in restoring visitors' sense of arrival".

The whole structure is made up of two cast-iron gates through which cars used to pass, two side gates for pedestrians and four free-standing square columns.

About 20 per cent of the structure has been replaced to fix damage to its structural integrity and functionality.

The NHB said the original structure was likely prefabricated in Britain and shipped to Singapore, while its square columns were cast on the spot.

The NHB also uploaded the second video documentary of a three-part series about the refurbishment project on its heritage website Roots.sg on Saturday.

The board said the documentary will provide viewers with a behind-the-scenes look at the steps and techniques used at each stage of the refurbishment process.

Some parts of Bukit Brown have been razed as the LTA constructs a major eight-lane road through the cemetery to connect the MacRitchie Viaduct to the Adam Flyover.

This project is expected to be completed by the end of next year.
News