Two skeletons that were found 9 years apart, the reclusive sisters who lived their own lives.
Now that the estate is open to claims,  just who are they and who are their ancestors?
The Goh Brothers, Charles and Raymond Goh have been fascinated by the Batai House story, as we have done some investigation in the past when the neighbour next door complained of unusual happenings in 2006.

We are shocked by the second skeleton found, and it seem no one seem to really know or care about them.

So we have decided to piece together the family history of Pearl and Ruby Tan so at least the public get the know their background better since Public Trustee's Office (PTO) is asking interested parties to submit their claims on the estate of the sisters by Jul 31. 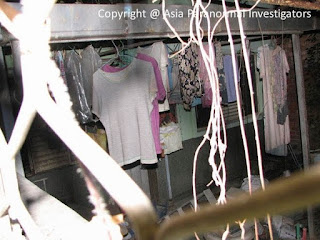 The Batai House whereby the two skeletons were found.  Pic taken from across the neighbour house when neighbour complained of unusual happenings such as flushing of toilet one week before the first skeleton was found.

It was a notice on Feb 5 1941 announcing the death 2 days ago  of a Chinese Chief Clerk who have 23 years with the Municipal Government. 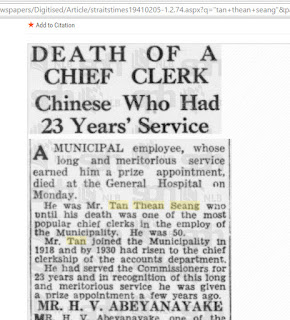 His children was mentioned in another notice which gave more family history of Tan Thean Seang: 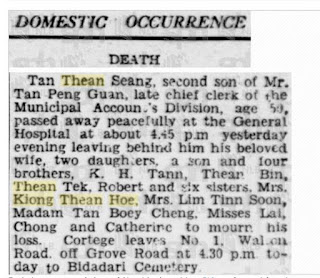 He was the second son of Mr Tan Pong Guan, leaving behind a wife , 2 daughters, a son and 4 brothers : K H Tann (Tann Kim Hock),  Thean Bin, Thean Tek, Robert Tan and six sisters. He also stayed at No 1 Walton Road, off Grove Road and was buried in Bidadari Cemetery 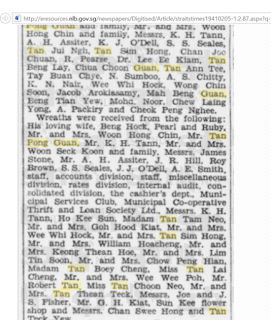 From another notice about wreaths received we can decipher who' who in his family based on other notices and land deeds.
Here was mentioned his loving wife,  his son Beng Hock,  and two daughters Pearl and Ruby.  There was also mentioned about Mr and Mrs Woon Hong Chin and Mr and Mrs Woon Seck Koon. 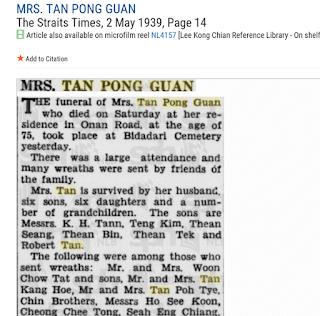 Therefore Tan Pong Guan has 6 sons as well including 6 daughters: 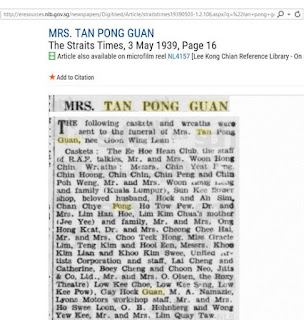 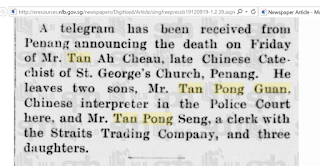 Tan Pong Guan father was Tan Ah Cheau,  later Chinese Catechist of St George's Church in Penang. Tan Pong Guan was a Chinese interprester in the Police Court in Penang and his father Pong Seng was a clerk in the Straits Trading Company.  Tan Ah Cheau has 3 daughters as well 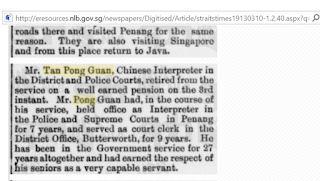 In 1913, Tan Pong Guan retired from the Police Court.
In 1918, from his first wife Yeo Swee Kim death, we knew he came over to Singapore, became managing clerk of Radyk and Davidson and also the hon secretary of Ee Ho Hean Club. He also became secretary to the Consul General for China in 1927 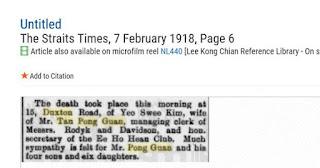 How are the Kiongs and the Woons related to the Batai sisters Pearl and Ruby?  Who was their mother?
For these questions, Charles and I have to turn to land deeds for help. Charles managed to get the old address of Pearl Tan Leen Hee of 19 Butterworth Lane when she borrowed for the purchase of 17 Jalan Batai in 1957
Purchasing the land deed of 19 Butterworth bring up the name of Kiong Thian Hoe,  eldest son in law of Tan Pong Guan,  ie Tan Thean Seng brother in law.  We search for Kiong Thian Hoe which brought up more relations: 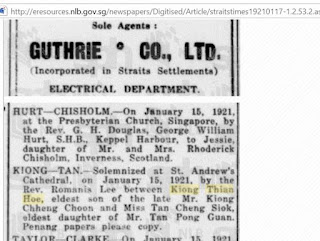 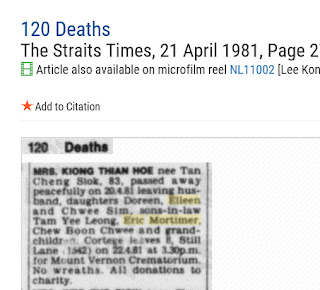 One of Kiong Thean Hoe's daughter Eileen was married to Eric Mortimer, in 1972, he was the first non-Chinese President of the Print and Media Association

The Woons :
Studying the land deed of No 1 Walton Road brings up the owner in 1951 – Woon Hong Chin, executor of the estate of Wong Ah Hoh (Hong Chin's wife who died on 15 May 1951 see tomb below), who passed this property upon her death to her husband Woon Hong Chin
Woon Hong Chin
Died at the old age of 92 on 19 May 1964. Below is a picture of him when he retired after 25 years of service with the Accountants Department in Jun 1929. 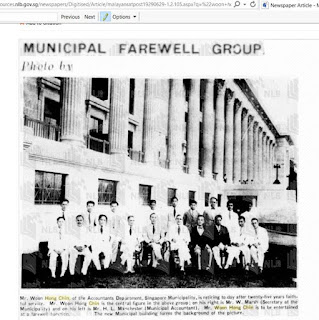 He was 55 years of age in 1929 and had been granted 6 months extension of service then. 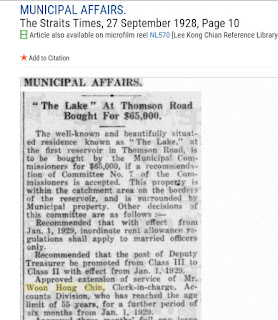 The tomb of Mrs Wong Hong Chin was found in Bukit Brown and has been blogged by Peter Pak, rojak librarian

http://mymindisrojak.blogspot.sg/2015/01/woon-hong-chin-bukit-brown.html
His wife was Wong Ah Hoh and a Cantonese based on BB burial records who died at the age of 73. 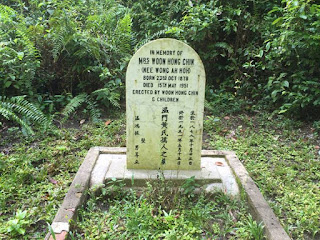 We know from the newspapers reports that Pearl and Ruby maternal grandfather was Woon Hong Chin, and in 1957 Pearl was even mentioned on the land deed of 1 Walton Road when she bought 17 Jalan Batai 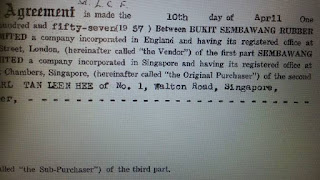 Therefore 19 Butterworth Lane that Pearl name was mentioned in the land deed belonged to Kiong Thean Hoe whereas 1 Walton Road was that of her mother Woon side
Joseph Woon Seck Koon, son of Hong Chin who stayed in 1 Walton Road, has a daughter whose name was Woon Gek Lin, and Woon Gek Lin was Mrs Tan Thean Seang, ie mother of Pearl and Ruby Tan

K H Tann (eldest brother of Tan Thean Seang)
K H Tann was a well know cinema pioneer and film distributor, managing the Operation of Universal Pictures in Singapore.
On 9 Jul 1925, he even went to Bangkok, taking with him the picture "The Hunchback of Notre-Dame," which he was arranging to screen before the Siamese Royal Household

Kim Hock was the son of Tan Pong Guan, who was at one time secretary to the Consul General of China based in Singapore. 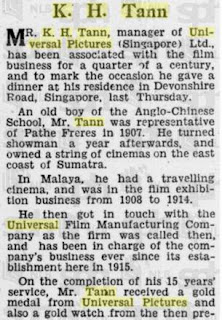 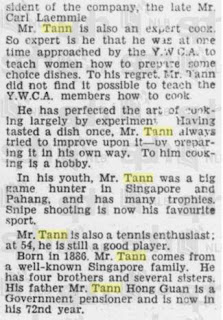 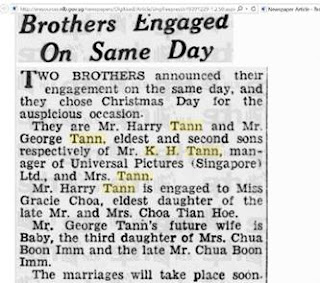 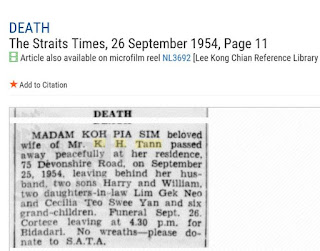 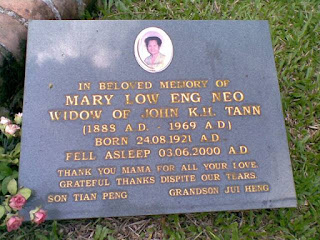 There is a memorial stone in Bukit Brown,  in memory of Mary Low Eng Neo, widow of K H Tann who died in  May 1969. 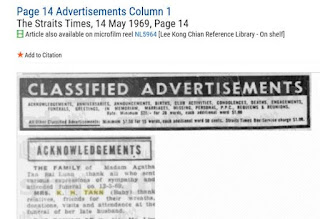 The reason why the memorial stone is found in Bukit Brown is because she was the daughter of Lo Kim Hak (letter writer for the Sinkehs (immigrants)  in the past during the 1910 – 20s, just after the Chinese Republic was formed.
He was a very helpful person, and was well liked by the Sinkeh
Lo was well respected by the people, but he earned a honest living, he was very poor when he died young at the age of 37 in 1925, but the sinkehs and neighbors put together $300 for him to have a nice marble tombstone
My grandfather then had married Gan Kwee Geok, who lived till a ripe old age.  Before she died, she became a Catholic.
Lo and Margaret has 2 daughters,  one of them was Mary Low who was married to K H Tann
better known as Tann Kim Hock,  he was a cinema pioneer of the early days of Singapore, and worked for Universal Pictures
(above story from descendant) 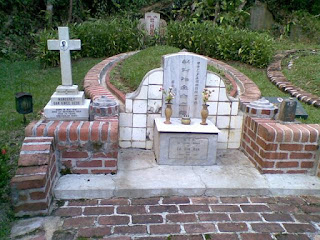