Thanks to his weekly tomb-clearing trips to discover facts about our heritage, a S'pore pharmacist has been named by BBC as one of 15 most inspiring people 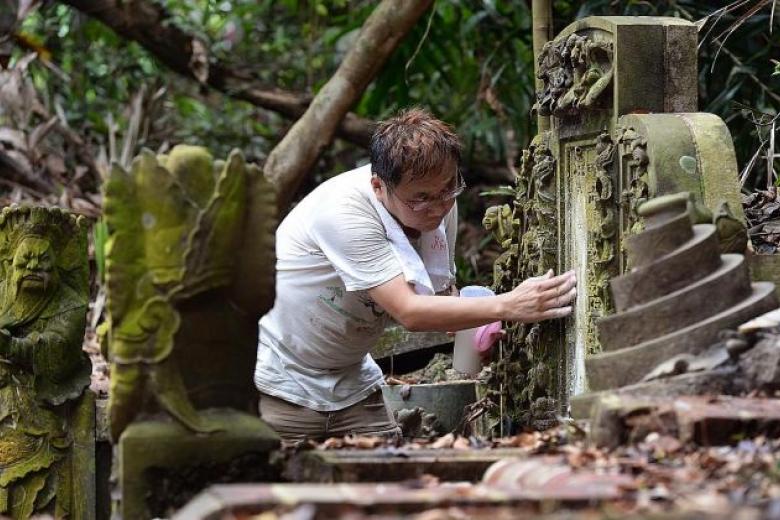 His is not an ordinary passion.

Mr Raymond Goh clears and examines tombstones to piece together information about the historical context of the deceased's lives.

Then, he tries to connect the deceased's descendants to their ancestors' burial sites.

Mr Goh, 52, tells The New Paper on Sunday: "I help to uncover Singapore's lost history in our own backyard. Some of our cemeteries are heritage gems that are almost like living museums."

The "tomb whisperer" has been shortlisted as an Outlook Inspiration by the British Broadcasting Corporation (BBC).

He made it to the top 15 from an initial list of 50 inspiring people from around the globe.

Three people will be picked as the ultimate Outlook Inspirations and results will be announced tomorrow.

Mr Goh, a pharmacist at a multinational company, was nominated for the part that he has played in discovering lost aspects of Singapore's heritage with his finds during his weekly tomb-clearing expeditions.

He looks at details such as names of the deceased, names of descendants, dates and decorative flourishes.

And one graveyard site that he has returned to, week after week, is Bukit Brown.

He says: "Of all the graveyards I've been to, the ones in Bukit Brown complex have the most variety and history.
"The tombstones can tell (Singapore's) story all the way from its founding to modern times."
Mr Goh has unearthed fascinating fragments of Singapore's past that would otherwise have remained hidden indefinitely in overgrown, abandoned cemeteries.

The oldest tomb he has found in the Bukit Brown complex of cemeteries, where he focuses his work, dates all the way back to 1826, which he pointed out is "just seven years after Singapore was founded by Sir Stamford Raffles".

Two years ago, Mr Goh stumbled across the final resting places of the late Mr Lee Kuan Yew's maternal great-grandfather, grandfather and grandmother. Before his discovery, he had read a recent "article about Mr Lee that mentioned his ancestors' names", and he remembered them when he read the inscriptions on their tombstones.

He and his brother, Charles, 48, have inspired a community called All Things Bukit Brown - also affectionately called Brownies - whose members are all equally passionate about Bukit Brown.
There are now "over 30 Brownies conducting guided walks", estimates Mr Goh.
More than 17,000 people have gone on such conducted walks through the Bukit Brown cemetery complex since the programme began in 2012.

She says: "We are proud of the Goh brothers, and Raymond in particular, for shining a light on our heritage and showing a way for others to... contribute to promoting our history and heritage." 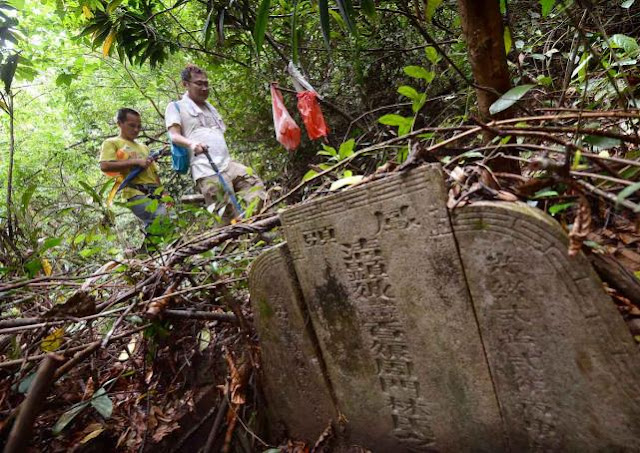 TNP PHOTOS: CHOO CHWEE HUA
He demonstrates how he fills the gaps made by inscriptions with flour, which sticks in place and makes it easier to read the engraved letters or characters.


But before he can examine the tombstones, he must first find them, he says, with a chuckle.

That means climbing through the branches and thick foliage in the less-maintained areas.

He says: "I sometimes get stung by insects, ants, spiders and wasps... These bites are painful (and cause) swelling and itching... and some of my tombkeeper friends have been stung by scorpions."

But this doesn't deter him from the task at hand.

And with the increased publicity he received when the Government announced plans to build an eight-lane road through the cemetery in 2011, Mr Goh found a surge in the number of requests from people wishing to find their ancestors' tombs before they were exhumed.

He says: "Some people have asked me to help with locating their ancestors' graves. Helping them is one of the most satisfying aspects of what I do."

In the wake of his BBC Outlook Inspiration nomination, Mr Goh has found people he hasn't spoken to in years congratulating him, including classmates from school and university.

He even took some of his Secondary 4 classmates from Gan Eng Seng school - where they graduated 37 years ago - to visit their school founder's tomb in Bukit Brown.

He says: "We sat around the tombstone and sang the school song, which we hadn't sung for so many years, and I felt a lump in my throat. It was a very heartwarming moment."

Driven by passion and compassion

To celebrate the 50th anniversary of Outlook, 50 inspiring people from around the globe were picked as "Outlook Inspirations" for stories of their bravery, compassion or determination.
Some of the inspiring candidates include:

a park ranger who cares for orphaned mountain gorillas at Virunga National Park in the Democratic Republic of Congo in Africa.

His deed: He found and saved a two-month-old gorilla after its mother was shot through the back of the head.

People doubted that the young gorilla, Ndakasi, a female, would survive, but it now weighs 65kg and treats Bauma like its mother.
Four other orphaned gorillas have been housed at the gorilla orphanage that Bauma heads, though one died in 2012.

Bauma divides his time by spending three weeks in Virunga with the gorillas and one week at home with his human family.

His deed: Hossain helped move people out of the ruined building and had to perform amputations on a few of the trapped individuals.

A doctor outside the building was too afraid to enter it, so Hossain took his knife and anaesthesia and amputated a girl's hand, crying as he saw her crying in pain.

He was in the building rescuing people for 28 hours.

founded the Stichting Ambulance Wens (Ambulance Wish Foundation) after taking a terminally ill patient to say goodbye to the harbour before moving him from one hospital to another.

His deed: The patient had told Veldboer how he had abandoned his last wish - to sail once more - because he was stretcher-bound.

The Dutchman borrowed an ambulance on his day off and, with the help of a colleague and a boat tour firm, took the patient sailing.

Touched by the joy that this gesture brought to the patient, Veldboer and his wife, Ineke, started the foundation.

It grants the wishes of the terminally ill and immobile.