They will be relocated near original location after six-month refurbishment, likely in June

Visitors to the Bukit Brown Cemetery will soon be greeted once more by its iconic cast-iron gates.
Removed from their Lorong Halwa posts last year to make way for a major road, the structure now lies in a workshop but will go up in a new access road near its original location, likely next month.
At the workshop in the north of Singapore, workers have been gingerly brushing away the layers of rust that have accumulated in the grooves of the cast-iron gates. 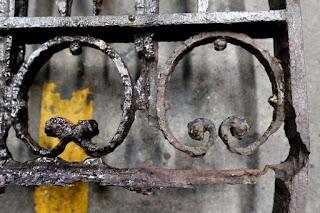 The brittle gates are undergoing a six-month refurbishment, and will go up in a new access road near their original location in Bukit Brown, likely next month. ST PHOTO: CHEW SENG KIM

Supported by wooden frames, the brittle gates are undergoing a six-month refurbishment by a team from Fusion Clad Precision - a contractor hired by the National Heritage Board (NHB).
The refurbishment, which started in January, has five core steps. Rust is first removed before coatings are applied to reduce future corrosion.

The gates' lock and latch components as well as lampholders are then repaired before missing parts are replaced. The last step is to reinforce the gates' structural integrity.
The team, comprising four master craftsmen and three other members, is at step two of the process.
Its managing director Teo Khiam Gee said the gates need a lot of attention as well as "the human touch".

"Skilful hands are important as the parts are in varying states of disrepair. Its original state was very fragile. It is like handling a baby," he said.
The structure is made up of parts, such as a pair of cast-iron gates through which cars used to pass, two side gates for pedestrians, and four free-standing square columns.
It was likely prefabricated in Britain and shipped to Singapore. Its square columns were cast on the spot. 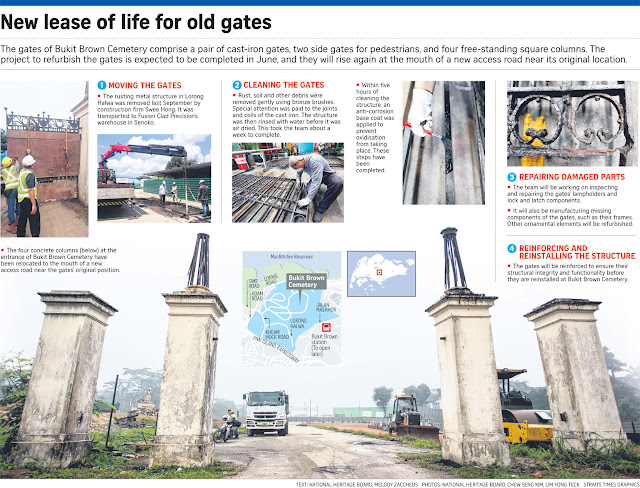 About 20 per cent of the structure will be replaced to address the damage to its structural integrity and functionality.
NHB told The Straits Times that the gates will likely be relocated next month to the mouth of a new access road near its original location.
NHB's assistant chief executive of policy and community, Mr Alvin Tan, said retaining and refurbishing the gates are important as they "provide a sense of arrival to the cemetery and preserve a sense of continuity for visitors and interest groups".
The refurbishment is an initiative of a multi-agency work group chaired by the Ministry of National Development. It includes NHB, the Land Transport Authority (LTA), and civic organisations All Things Bukit Brown and the Singapore Heritage Society (SHS).
The effort is guided by conservation best practices shared by SHS. The heritage board also has its own in-house metals specialist, Mr Ian Tan, manager of the heritage research and assessment division.
When ready, the gates will be painted black - a common colour for outdoor use.
Mr Tan said its original colour is hard to determine. Exposed layers of paint show that it had changed colours - which included a shade of blue - a few times over its history.
Mr Tan said the structure is one of the rare large-scale ornamental iron gates in Singapore. "It shows how technology flowed across countries. It is also likely that its ornamental parts were done here in Singapore. Each coil and twist are different and clearly done by hand," he said.
Some parts of Bukit Brown have been razed as the LTA constructs a major eight-lane road through the cemetery to connect the MacRitchie Viaduct to the Adam Flyover. This project is expected to be completed by the end of next year.
NHB launched its documentary on the relocation of the gates on its heritage portal Roots.sg yesterday.
News