WWII memorial, 35,000 graves in section of cemetery will be gone under exhumation programme

On a grassy patch in Choa Chu Kang Cemetery lies an unusual square plot with a solitary stone tablet - the final resting place of the martyrs from Little Bamboo Lane.

The 46.5 sq m tomb memorial is believed to house the remains of several Chinese who died during the Japanese Occupation of Singapore in World War II.

The tablet inscription states that it is a memorial for Chinese "patriot victims" killed in the spring of 1942, in a village along Little Bamboo Lane at the 5 ½ milestone in Bukit Timah.

Soon, this World War II memorial and 35,000 graves in a section of the cemetery will have to go.

They are slated for exhumation in August under phase five of the National Environment Agency's (NEA) exhumation programme at the Choa Chu Kang Cemetery. The World War II memorial in the heart of Choa Chu Kang Cemetery. It features a stone tablet with gold inscriptions in the middle of a compound decorated with ceramic lotuses. ST PHOTOS: LIM YAOHUI


Mr Raymond Goh, a tomb researcher who found the memorial, worries that this and the remains of significant pioneers "will be gone for good", as many of the tombs do not appear to have been visited in years.

Graves that go unclaimed will first be exhumed and cremated by NEA. Their ashes will be scattered at sea if they stay unclaimed three years after exhumation. The deadline for claim registration is July 31.

NEA told The Sunday Times that as of March, only about 900 graves have been claimed.

The latest phase of the exhumation programme was announced in July 2014. Due to land scarcity, NEA introduced a policy in 1998 which limits the lease of graves to 15 years.

Mr Goh, who has been studying the affected site over the past year, has identified several historic graves there, including several dating back to the 19th century. He also found the graves of prominent Singaporeans such as Dr Adolphus Josiah Thumboo, uncle of poet and academic Edwin Thumboo.

The late Thumboo, who died in 1956, was probably the first Asian to teach anatomy at the King Edward VII College of Medicine.

The area also houses the remains of 11,500 pioneers from the defunct 1840s Loke Yah Teng Cemetery in Tiong Bahru. They now take the form of small, plain tomb markers arranged like neat teeth in rows, across a large, sloping plot of land at Choa Chu Kang Cemetery.

Many of the 35,000 graves slated for exhumation were moved there as a result of redevelopment. They were re-interred from defunct graveyards between the 1940s and 1970s, with the aid of old clans including those of the Huang, Chua and Lim lineages.

Mr Goh told The Sunday Times: "The least we can do is to give them some recognition, and to know what we are removing."

He hopes the significant tombstones there will be documented and studied by the National Heritage Board (NHB).

The war memorial, for instance, features a stone tablet with gold inscriptions and decorations such as ceramic lotuses.

Mr Goh believes the war memorial, which was built in 1962, could have been forgotten during the nationwide effort in the 1960s to rehouse the remains of the Chinese community's war dead at the Civilian War Memorial at Beach Road.

He said: "It's a great mystery. Who were the martyrs who were killed in this village? The inscription itself is very meaningful and the memorial should be preserved as it is.

"There are a lot of unanswered questions. When you remove these headstones and their remains, a facet of our history will be gone."

The Sunday Times understands that NHB is in discussions with NEA about the historic structures at the cemetery.

Mr Kok, who is self-employed, said more can be done to inform the public about the exhumation. He hopes the authorities can publish names and old records so that next-of-kin can come forward.

"It's important to care for our family history and heritage," he said.

Mr Goh added that clans can help by "taking the initiative to inform its members" about the exercise.

Other key graves in the area include those from Tan Jiak Kim's family burial ground of more than 70 graves. Tan has a street in River Valley named after him.

Tan, who died in 1917, was a Straits-born Chinese merchant and political activist. He co-founded the Straits Chinese British Association. His great-grandson, Mr Tan Tiang Teck, 74, a retired insurance executive, stressed to The Sunday Times the importance of "honouring the country's forefathers".

The section of the cemetery slated for exhumation is also home to graves from the Yeo clan, which includes a mass family grave watched over by statues of four Sikh guards and Chinese military warriors. 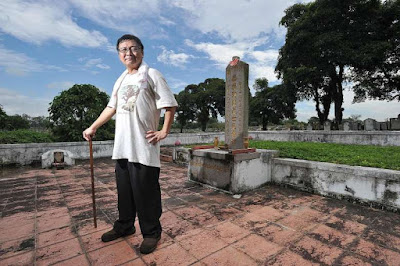 Mr Goh, a tomb researcher who found the memorial, worries that this and the remains of significant pioneers "will be gone for good", as many of the tombs do not appear to have been visited in years. ST PHOTOS: LIM YAOHUI The Choa Chu Kang Cemetery, which houses the final resting place of the World War II martyrs from Little Bamboo Lane at the 51/2 milestone in Bukit Timah, according to a tablet inscription there.ST PHOTOS: LIM YAOHUI
Featured News