SGH to 'preserve heritage features as far as possible'

When part of the boundary wall of a 129-year-old former lunatic asylum and at least four 19th-century tombstones were found on the grounds of Singapore General Hospital (SGH) in late 2014, experts described them as "significant" historical structures.

But extensive plans to redevelop the SGH campus in Outram over the next 20 years were unveiled last month, and the "tomb-hunter" who found the remnants feared that they could be lost forever.

However, the Ministry of Health, in response to The Straits Times, has given the assurance that the 3m-high wall and nearby tombstones "will not be affected" by the recently announced redevelopment. Its spokesman said it is "mindful" that the SGH campus has a rich history and "will preserve its heritage features and structures as far as possible", adding that detailed plans for the individual structures are still being worked out. 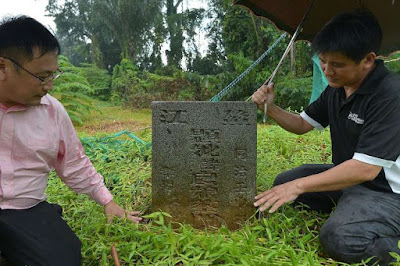 A remnant of the boundary wall of the 129-year-old former lunatic asylum and (above) "tomb- hunters" Raymond (in pink) and Charles Goh with one of the Chua family tombstones. The structures were found in late 2014. PHOTOS: ST FILE, ALPHONSUS CHERN 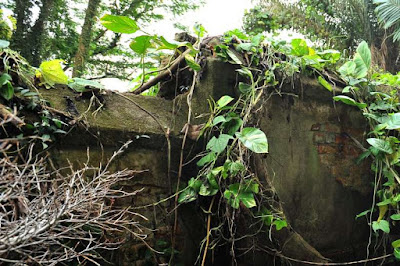 They were found by Mr Charles Goh, 48, a senior safety manager of a construction company, during his free time. Mr Goh was relieved to hear the news and believes the structures can add character to the site, which is being earmarked as a new research park.

"Development is usually prioritised over heritage," he said. "In this case, it's heartening to know that the authorities are sensitive and willing to protect the different layers of the site's history for future generations. It's something other organisations and developers can emulate."

The wall once fenced the 300- bed New Lunatic Asylum - one of Singapore's three early psychiatric hospitals. It operated from 1887 to 1928 and was the predecessor of the Institute of Mental Health.

The National Heritage Board published an online video documentary about the wall in November 2014. The crumbling structure, which is about 75m long, was found wrapped by creeper plants and tree roots.

Associate Professor Ng Beng Yeong, head and senior consultant psychiatrist at SGH's department of psychiatry, and author of a book on the history of mental health services in Singapore, said at the time that the wall served as a reminder that the asylum had been revolutionary.

It had practised patient kindness by reducing restraints to the bare minimum and doing away with straitjackets.

The tombs were part of the 1866 Chua clan cemetery. Part of it was later acquired by Thian Hock Keng temple trustee Chua Bian Kay. The tombstones could have been forgotten or left behind when the land was cleared in the 1920s to make way for the hospital and housing projects.

The site is skirted by College Road, Jalan Bukit Merah and MacAlister Road.

Tomb expert Mr Raymond Goh, 52, a director of a healthcare company, studied the inscriptions on the headstones and found they belonged to members of the Chua family including Chua Soon Chin (1878) and womenfolk such as Ee Liang Neo (1872) and Ho Koon Neo, whose grave states that she died during the 1862-1875 reign of Chinese emperor Tongzhi.

The heritage community has given suggestions on how these structures can be incorporated into the design of the revamped site.

Mr Charles Goh wants to see them worked into the new research park. He said: "Professors and scientists working at the research park could still have a manicured landscape, with the headstones added to the space as a spot to reflect on the past and the people who have come before them."

The Singapore Heritage Society's executive committee member Dr Yeo Kang Shua believes the redevelopment is an opportunity for the authorities to "develop a coherent historical narrative and improved access to these historic structures".

Noting that SGH already has a museum, Dr Yeo said: "Why not draw up a walking trail where recuperating patients and guests can take a stroll to these sites as part of the objective to encourage healthy living?"

The Health Ministry added that other memorials within the SGH campus will be retained as much as possible, or relocated to a suitable site. The campus is also home to preserved buildings such as Bowyer Block and the clock tower, which will not be affected by the redevelopment.