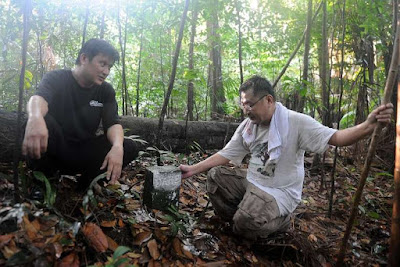 Mr Charles Goh (far left), 47, and Mr Raymond Goh, 51, who are researching Bukit Brown and its vicinity, discovered the significance of two markers, which pieced together the story of Mr George Mildmay Dare and Mr Seah Eu Chin, who were among the first land owners in the MacRitchie area. ST PHOTO: ALICIA CHAN

Deep in the heart of MacRitchie Reservoir Park once stood a lakehouse built in the 1890s and owned by Briton George Mildmay Dare, a former secretary of the Singapore Cricket Club.  (See correction note below)

Both Mr Dare and prominent local merchant Seah Eu Chin were among the first to own land at what was then known as the Impounding Reservoir, or Thomson Reservoir. The colonial government later acquired the privately owned land to widen the reservoir.

What remains today are two stone markers inscribed with the words "Dare" in English and "Seah Chin Hin" in Chinese for Mr Seah's plantation, as well as the stone and brick foundations of Mr Dare's former home. This account of the area's early occupants and how land use there evolved was pieced together in July by tomb-hunting brothers Charles and Raymond Goh, after they began studying the markers and land ownership records.

The Gohs first found the artefacts in 2011 as part of their research on Bukit Brown and its vicinity.

Their quest to piece together the history of Singapore's early occupants takes them to thick forested areas every weekend, in search of remnants of the past such as markers and graves.

Raymond, a Hwa Chong alumnus who is well-versed in Chinese culture, is also focusing on the approximately 40.4ha Lao Sua cemetery near Mount Pleasant Road. He has dedicated the past year to studying the graves there.

Among Raymond's latest finds are the graves of 10 pioneers buried in Bukit Brown, who have roads named after them. These include businessman Kiong Siok Wee, one of the proprietors of the Singapore Free Press, who died in 1888 and was buried in the Hokkien cemetery adjacent to Bukit Brown. The Siok Wee Road near Chin Swee Road has since been expunged.

Raymond, 51, director of a healthcare company, said: "These early Bukit Brown graves hold the stories of Singapore's first generation of pioneers who came here soon after Stamford Raffles. We need to do research on them to learn where they came from and how and what they contributed to the island."

Dr Chua said that his find has helped her to trace her lineage beyond just her great-grandfather. "The brothers' work has had a major impact on Singaporeans struggling to trace their roots. They help to demonstrate Bukit Brown's links to living individuals and families today," she said.

The brothers hope to set up a digital library repository by early next year to archive their finds since 2006. Raymond also plans to etch out a public trail in Lao Sua to highlight 50 tombs of interest.

Younger brother Charles, 47, head of workplace safety and health at a Japanese firm whose expertise lies in digging up land records, hopes for more support from the authorities. He said: "A lot of this historical work relies on our own steam, manpower and finances. We hope the relevant bodies can recognise the significance of our work and the historical value of Bukit Brown and its cemeteries which are rich in data. After all, we're making new discoveries each week."


Correction note: An earlier version of this article incorrectly stated that George Mildmay Dare was a former president of the Singapore Cricket Club instead of a former secretary. We are sorry for the error.