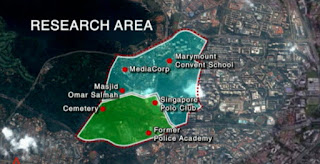 SINGAPORE: Authorities have called for a detailed study into the architectural, historical and community significance of two areas in central Singapore - Caldecott and Mount Pleasant.

This was revealed in a tender document published by the National Heritage Board (NHB) on the Government's procurement website. The Board told Channel NewsAsia that the study will guide its work in research, planning and outreach.

"The Mount Pleasant and Caldecott area is home to several notable sites and buildings, such as the existing MediaCorp Broadcast Centre, which will be relocating to Mediapolis at Buona Vista, the former Police Academy and colonial bungalows," said an NHB spokesperson.

The area of research is divided into two parts. One covers the Thomson Road and Marymount Road area, which is where the former Police Academy, the Singapore Polo Club and Kopi Sua Cemetery are situated. The other part involves the vicinity around Lornie Road, which includes buildings like MediaCorp Broadcast Centre, Masjid Omar Salmah and Marymount Convent School.

The research will cover aspects like the age of buildings and structures, historical and sociological importance of the sites, as well as information on notable personalities buried in the cemetery. Added to that are personal accounts and memories associated with the areas. A historian said the Government is commissioning the study before it decides on future development.

Said Dr Kevin Tan, who is the president of the International Council on Monuments and Sites Singapore: "They clearly want to make sure that any kind of planning decision on the area should be done on the basis of proper information, good information, historical data, so that going forward they know exactly what to do and they can't seem to have less information than the civil society actors."


The research will cover aspects like the age of buildings and structures, historical and sociological importance of the sites, as well as information on notable personalities buried in the sites.

One of the most iconic landmarks in the Caldecott area is Caldecott Hill. For nearly 80 years Caldecott Hill has been synonymous with broadcasting in Singapore. Come December, national broadcaster MediaCorp will start to move to its new premises in Buona Vista. When the move is complete, it will free up about 70,000 square metres of prime land. However, there are some limitations to how the area can be developed.

"Unfortunately, they do have some constraints," said Mr Nicholas Mak, executive director for Research and Consultancy at SLP International. "Firstly, it is surrounded by a lot of luxury landed houses, including some good class bungalows. Secondly, the roads are fairly narrow and there is very little possibility the roads can be expanded, hence that plot of land on Caldecott Hill may not be able to sustain very high density development.

"For example, I don't think it's possible to build office buildings or commercial developments on that hill because the traffic conditions are going to increase tremendously and this will lead to a lot of complaints from the residents in that area. Even during the construction period it will affect the existing residents. Hence, the development of that plot of land is going to be very gradual. It's going to take quite a long time and the most likely type of development is going to be landed residential houses."

Mr Mak said any conserved site must still serve a future need. Dr Tan added that deciding what to conserve goes beyond just the architectural merit of a building.

"A building is a building," said Dr Tan. "You can have one use of it today, you can switch to another tomorrow. But what are people's memories about a space that evoke certain emotions, that tie them to Singapore? I think that's what the state is finally getting around to and saying, 'We've really got to look at the entire social history, so that we understand why people feel the way they do about a particular space'."

One area that will definitely see redevelopment is the former Police Academy. The future Mount Pleasant MRT station along the Thomson-East Coast Line, to be completed by 2019, will be located within the site.

The research is expected to take 12 months, from the date the tender contract is awarded. NHB said the data collated will "contribute substantially to our existing pool of heritage knowledge, while complementing our broad-based island-wide heritage landscape survey launched in Aug 2015" aimed at building up a database of heritage sites, buildings and structures across Singapore.

Said the NHB spokesperson: "Due to the scale and objectives of the survey, it will not yield detailed information of all areas and buildings. Hence, it is important to complement the island-wide survey with research studies on localised areas of noteworthy heritage value. These studies are intended as deep-dive studies that involve comprehensive research and documentation of the areas, including the various sites, buildings and structures."
News