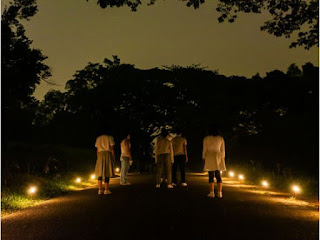 
Construction for an eight-lane highway cutting through Bukit Brown Cemetery has already begun, but questions surrounding its fate continue to haunt us.

And, as this year’s edition of the Singapore International Festival of Arts came to an end over the weekend, the issues behind the world’s biggest Chinese cemetery outside of China — the campaigns to save it and the debates that surround it — got an airing once more with theatre group Drama Box’s second production under its It Won’t Be Too Long series, titled The Cemetery.


It had come after The Lesson, which took place during the General Election and saw audiences deciding on what site they thought most expendable in the name of a fictitious new MRT station and progress. With a fictitious columbarium-cum-heritage site chosen as the least important site to keep in two of the four nights, Bukit Brown was thrown into even sharper relief in The Cemetery.

Directed by Kok Heng Leun, it comprised two distinct shows: Dawn and Dusk. The former took place at the famous cemetery, with audiences gathering at 5.30am to witness a wordless performance of what could be interpreted as a gathering of the place’s own ghosts — a group of dancers in white performing on a candle-lined inclined road, on top of which was a piano.

In the show, they slap their hands, move around playfully, sometimes monkey-like, and in this specific context, their actions have literal narrative meanings: When someone tries in vain to prop up his slowly collapsing fellow performers, you imagine the latter as the tombstones. When a truck briefly (and unexpectedly) interrupts the performance by passing through, you think of the highway. All these without a single word being said, and instead, you have the audible exhalation of breath, as if a sigh, or a humming of a poignant melody, later ending with a piano performance by dancer Leong Jian Hao.

All these take place in the middle of the cemetery, lending the performance not only ambience but immediacy. And as the show ends, volunteer tour guides (aka Brownies) offer a brief trip around the premises, highlighting the now-famous Sikh guards watching over graves and even the grave of the late Lee Kuan Yew’s grandfather — even as construction hoardings stand as a reminder of a different kind of passing.

Forming the Dawn show’s counterpoint is the Dusk performance, held at School of the Arts at night. The real-life cemetery has been transformed into a map outline inside a theatre, the early morning’s performers are back but there is now the added layer: Actors Jo Tan, Karen Tan and Tim Nga were reading lines.

Whatever emotions were evoked by the physical performances and ambience of the morning show is now grounded in fact and history, as we hear the different accounts of a saga that began in 2011 when the Land Transport Authority announced plans to build a new road across a cemetery that had disappeared from public consciousness for the past three to four decades.

The voices, compiled by playwright Jean Tay, are varied: You had the Brownies, nature lovers, relatives of those buried at the cemetery, amateur historians, a tomb keeper, and civil society and government leaders such as Singapore Heritage Society’s Chua Ai Lin, SOS Bukit Brown’s Jennifer Teo and then-Minister of State for National Development and Manpower, Tan Chuan-Jin.

It is a saga that many of us are familiar with: The clash of history, culture, heritage and nature on one side, and urban development, economic growth and so-called land scarcity on the other (with 24 golf courses in Singapore, someone pointed out in the show).

The different perspectives have already played out on mass and social media. But the show also offers added context and perspective: How the specter of the old National Library’s demolition in the name of a tunnel loomed over this issue; that the Bukit Brown saga was post-GE2011 and there was also the Rail Corridor issue with the railway land given back to Singapore that same year.

At the same time, it also draws on distant history: The government’s hand in the cemetery’s current transformation is uncannily similar to what took place in the early 1900s — albeit in a reverse fashion when it decided it needed a municipal cemetery and acquired a portion of land owned by wealthy Hokkien businessmen.

But, this is not just the story of a cemetery. In many ways, it is also the story of Singapore’s civil society in its infancy, a motley group of people seemingly unprepared as they were thrust into the sudden role of the cemetery’s champions. It was not so much the lack of support, one of the interviewees mentioned after the disheartening news that the project was to push through. It was the lack of “making-noise-ability”.

And as the floor’s map outline is eventually covered by many footprints, noise does surface near the end: Instead of the tinkling of piano keys, you had the loud guitar-driven song August Is The Cruellest by the band The Observatory. “Soon we forget what is wrong, what is right,” goes its lyrics, as the music evokes anger, frustration, despair and destruction — but perhaps also the slightest trace of hope (from a band with an album titled Time Of Rebirth, after all). As a sign of respect, the names of all the dead whose graves were exhumed are flashed on the screen one last time before we are left to ponder what is next for the living.