SINGAPORE - The iconic cast iron gates that greeted visitors entering Bukit Brown Cemetery for close to a century have been removed from their posts to make way for an eight-lane road. 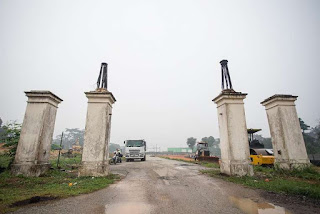 The cast iron gates and four concrete columns (above) at the entrance of Bukit Brown Cemetery are making way for an eight-lane road.
PHOTOS: NATIONAL HERITAGE BOARD, LIM YONG TECK FOR THE STRAITS TIMES

Still, the good news for heritage groups is that the rusting metal structure in Lorong Halwa will be refurbished and eventually relocated at the mouth of a new access road near its original location.

On Monday, construction firm Swee Hong removed the iron gates and placed them in an on-site Land Transport Authority (LTA) storage facility alongside other cemetery artefacts such as tombstones. The concrete columns will be removed in the coming weeks.

After that, the National Heritage Board (NHB) will hire a contractor to carry out refurbishment works.

The Bukit Brown entrance gates comprise several components including a pair of cast iron gates through which cars used to drive in, two side gates for pedestrians, and four free-standing square columns.

Likely prefabricated in Britain, the cast iron gates were shipped to Singapore while the square columns were cast on the spot. The cemetery opened in 1922.

The refurbishment is an initiative by a recently formed multi-agency work group chaired by the Ministry of National Development (MND). It includes the NHB, LTA and civic organisations All Things Bukit Brown and the Singapore Heritage Society (SHS).

Some parts of Bukit Brown have been razed as the LTA constructs a major eight-lane road through the cemetery to connect the MacRitchie Viaduct to the Adam Flyover. The LTA said the project is expected to be completed by the end of 2017.

NHB assistant chief executive of policy and development Alvin Tan said the gateway is significant: "It is one of the last remaining cemetery structures of its kind and serves as an iconic place marker for the cemetery and its heritage."

Among its suggestions: to construct a wooden frame to support the iron gates' structure upon removal and during storage; to minimise handling and movement; and to enlist a specialist metallurgy conservator.

On the gates' future position at the mouth of a smaller road, Dr Chua said this would affect the visitors' sense of arrival.

"The old entrance was majestic and had a sense of grandeur as you stepped forth down a wide road to the historic graves beyond," she said.

But she added that "the relocation of the original gates does help to preserve some sense of continuity".

A spokesman for MND said the working group is looking at issues such as future use of the cemetery's artefacts and enhancing the site for visitor access.

All Things Bukit Brown's co-founder Catherine Lim said the group's discussions have been "fruitful and productive" so far.

She added: "Our belief is that Bukit Brown is definitely a heritage site worth preserving. We are contributing ideas to the working committee to see what we can do for it in the short and long term."

Said the MND spokesman: "The Government will continue to support the efforts of civil society, interest groups and interested individuals to discover more about Bukit Brown, and for the heritage of Bukit Brown to be shared and celebrated with more Singaporeans."