Land-starved Singapore exhumes its cemeteries to build roads and malls

Overgrown and littered with dead leaves, Bukit Brown cemetery does not feature in many tourist guides to Singapore. But its 200 hectares are one of the island’s few green spaces, home to a quarter of the bird species - and the final resting place for more than 100,000 people. Yet its days might be numbered. Over 3,700 of those 100,000 graves have now been exhumed, to make way for an eight-lane highway that will cut the cemetery in half.
This gruesome business is nothing new. In Singapore, hundreds of thousands of bodies have already been hauled up from the ground to pave the way for malls, roads and apartment blocks. The entire city-state of Singapore covers a mere 71,830 hectares, less than half the size of Greater London, so land is always at a premium here - and the needs of the dead generally give way to that of the living.

As the country marks 50 years since independence with a weekend of golden jubilee celebrations, however, questions are finally asked about how to preserve what little heritage Singapore has left. In a city where many buildings are brand-new, cemeteries are a rare link to the past. What’s more, as the exhumations continue, the custom of visiting and worshipping at an ancestor’s tomb – once so integral to Chinese culture – is starting to become unfamiliar to Singapore’s Chinese population.

Authorities say digging up Bukit Brown for the road will ease congestion from the Pan-Island Expressway, the first step towards further development of the area: the Ministry of National Development (MND) is considering converting all of Bukit Brown into housing by 2030. The exhumed remains are either reinterred in smaller plots, or cremated, according to the National Environment Agency (NEA). Relatives can then visit their ancestors at the shared plots or at various columbaria.

Only one cemetery is still open for burial at all: for between S$315 to S$940 (£146 to £435) per adult, you can be buried at Chua Chu Kang cemetery, in a less developed part of western Singapore. But, as with most things in the city-state, there’s an expiry date. Under the New Burial Policy of 1998, you can lease a plot only for a maximum of 15 years. (In Hong Kong, another similarly sized city, the problem is even worse: urns filled with ashes often sit in funeral parlours for months while waiting for the next available spot at a public columbarium, and the maximum burial period is just six years.)

Next to be exhumed in Chua Chu Kang is part of the Chinese section, with graves buried between 1947 to 1975. Relatives have been asked to claim the remains of family members before the end of July next year. The NEA said they did not know about any future plans for the area.
The country’s political leaders have often cited the challenge of balancing competing urban interests. In a statement, an MND spokesperson said: “The government needs to prioritise the use of our land for various needs such as housing, green spaces, utilities, transportation, ports and airports and amenities to support the functions of a nation. ... The bulk of Bukit Brown Cemetery will only be developed in the longer term.”

In 1978, there were 213 burial grounds on 2,146 hectares in Singapore, or about 3.7% of the island. Many were already facing clearance even then. Minister EW Barker told parliament that “over the next few years, all private cemeteries… which have been closed for burials, will be acquired as and when required for development.”

Since then, dozens of cemeteries have been lost. Prime among them was Bidadari cemetery, which served Christian, Muslim, Hindu and Sinhalese communities. Many notable people were buried there, including Augustine Podmore Williams, an English mariner on the SS Jeddah, whose story inspired Joseph Conrad’s Lord Jim.

Bidadari Cemetery was cleared between 2001 and 2006, in an operation that exhumed 58,000 Christian and 68,000 Muslim graves. In its place, the government is building a new town, complete with an underground, air-conditioned bus interchange and the city’s first underground service reservoir. The first public housing flats will go on sale this September.
Even the city’s main shopping belt, Orchard Road, is built on a former graveyard that was dug up. Ngee Ann City, a looming brown building that’s home to a major department store and up-market boutiques, marks the location of what used to be the largest Teochew community cemetery on the island. Now the gleaming mall generates revenue for Ngee Ann Kongsi, a charitable organisation for the Chinese Teochew community, allowing them to fund programmes in education.
Just a little down the road, Orchard Residences – a fancy private condominium built above the ION Orchard mall – is also built on what used to be Teochew grave sites. Four-bedroom, three-bathroom units in Orchard go for up to S$11m (£5m).
Conservationists are hoping to save Bukit Brown from going down this path. They say the cemetery should remain a free, public space, not be converted into an exclusive zone for the rich.
Norman Cho’s great-uncle Tan Kay Tiang occupies one of the graves that will be exhumed in Bukit Brown. Tan died in 1938, many years before his grandchildren – who are now in their 60s – were born. The grandchildren “were not particularly enthusiastic about the exhumation,” Cho said. So he stepped in to claim his great-uncle’s remains and cremate them.
“I did so with his great-granchildren in mind,” he said. “In a way, I try to preserve the memory of the man for his descendants.”
Khoo Ee Hoon, who volunteers to contact the descendants of people buried in Chua Chu Kang cemetery in the hopes that they will claim the remains upon exhumation, says many are not interested. “They no longer feel the anguish or the pain” associated with ancestors from three or four generations back, she said. Although many Chinese Singaporean families continue to visit cemeteries and columbaria during the Qingming festival, many others no longer follow such traditions.
“The whole cemetery culture is already gone,” says Darren Koh, a volunteer guide with All Things Bukit Brown, a group who organise guided walks through the cemetery. “The idea of worshipping or honouring the Earth deity first before you go to the grave, it’s gone. How many people on our tour had actually visited a cemetery before?”
This ever-growing estrangement from the “culture” of cemeteries has led to burial being seen as a waste of space in Singapore. Moreover, now that remains are almost certain to be exhumed eventually, more people are opting for cremation in the first place. In 2011, 80% of those who died chose cremation – almost everyone, in other words, except for people whose religions specifically dictate burial, such as Muslims, Baha’i and Parsees.
The activists of All Things Bukit Brown (they call themselves Brownies) hope to increase awareness of the cemetery’s ecological diversity and historical wealth, so Singaporeans can better decide if the space is worth conserving when it faces being dug up even further. The history contained in places like Bukit Brown is what gives Singaporeans a sense of belonging, Koh says.
“The difference between a home and a luxury suite at the W Hotel are the memories,” he said. “If you keep digging up all the memories that remain in a particular location, it may be the most beautiful place in the world but it will become a hotel room.”
It’s easy to see what Koh means about memories about Bukit Brown: the graves, which date back to 1833 and are arranged following Chinese beliefs in feng shui rather than in strict rows, are home to businessmen, manual labourers, industrialists and revolutionaries. “So much history is left uncovered here. If we lose all of this, will we ever get it back again?” Koh said.
Conservationists argue that Singaporeans shouldn’t always be required to choose between preserving cemeteries and the country’s development. Citing the example of how cemeteries in other cities such as Kuala Lumpur have been converted to heritage parks, Koh says alternative solutions can always be found, allowing Singapore to continue advancing while also preserving its history.

As we walk towards the old gates of Bukit Brown, now ringed by a construction site, Koh gestures with his walking stick towards the remaining tombs. “Romantically put, until the last grave is dug out I think we’ll still guide, because there’s a lot of history that we want to make sure we can save.” 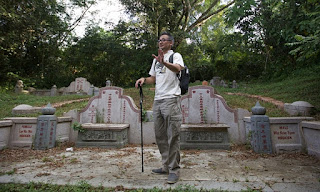 If you dig up all the memories, [your new development] will become a hotel room’ ... Darren Koh, one of the tour guides of historic Bukit Brown. Photograph: Kirsten Han
News