valeriekohsf@mediacorp.com.sg
SINGAPORE — The Republic’s successful bid to have the Singapore Botanic Gardens recognised as a UNESCO World Heritage Site earlier this month has sparked discussion, and hope, that more sites reflecting the nation’s heritage may gain recognition and protection.
Top on the wishlist of heritage experts and the public are Pulau Ubin, Bukit Brown and Jalan Kubor cemeteries, Jurong industrial estate, and even the types of public housing built over the years.
As the largest Chinese cemetery outside China with about 100,000 graves, Bukit Brown is a historical site comparable to others around the world, said Singapore Heritage Society vice-president Terence Chong. “More importantly, Bukit Brown is a showcase of the complexity of overseas Chinese culture with Fujian influence lying beside Peranakan aesthetics,” he added.

The society’s president, Dr Chua Ai Lin, said the cemetery was placed on last year’s World Monuments Watch, a global list of endangered cultural heritage sites. This is testimony to the fact that it has considerable heritage value, she said. Jalan Kubor, Singapore’s oldest Muslim cemetery and home to about 15,000 graves, is equally rich in heritage, she added.
The decision to build a road through Bukit Brown in 2012 resulted in consternation among conservation groups, which lamented the ensuing loss of heritage and biodiversity. Meanwhile, calls have been made to preserve Jalan Kubor by making it part of the Kampong Glam conservation district.
Last week, National Development Minister Khaw Boon Wan said the Botanic Gardens was “just the very first site” that Singapore could offer to the world, and that there was much to reflect upon with regard to the nation’s next heritage site.
Indeed, the Gardens’ success has led to much discussion about what else can be done to recognise other heritage sites — even if they do not have the potential to get on UNESCO’s list.
Singapore formally protects heritage sites through the inscription of National Monuments and conserved buildings. But Dr Chua noted that heritage-rich sites such as Bukit Brown slip through the cracks of protection.
“It is neither a building nor a monument,” she said, adding that there needs to be a comprehensive review of heritage legislation. “One of the things we’ve been saying is there is already existing legislation, but are they sufficient in protecting all sites?”
For instance, Singapore University of Technology and Design architecture assistant professor Yeo Kang Shua said public housing, ranging from Singapore Improvement Trust flats to more recent HDB homes, was worthy of consideration too, given the country’s success in this area.
Said Dr Yeo, who is also Singapore Heritage Society’s honorary secretary and whose work includes the restoration of Yueh Hai Ching Temple on Phillip Street: “We can look at the different periods of development and how we keep it as part of our landscape.” However, he acknowledged the challenges of getting public housing inscribed. “It’s a lived environment and, because of that, we have to accept that it’ll change over time.”
Architect and urban historian Lai Chee Kien pointed out that Jurong industrial estate, a “Garden Industrial Estate”, was revolutionary in its planning and design. “It’s the only industrial estate I know that crisscrosses industrial areas with greenery ... the Chinese and Japanese Gardens, Bird Park and lake area provide greenery for workers’ respite,” he said. “Jurong is a lesser-known but important idea that Singapore has given the world — that you can integrate green areas to ameliorate industrial areas, rather than setting them apart.”
Pulau Ubin, said Dr Chua, also needs further protection. “Pulau Ubin is not protected by any legislation now, but is a place that is rich in cultural heritage and deserves to be protected.”
Wishlists aside, Dr Chua said what is more pressing is the need to involve Singaporeans in the ongoing public conversation on heritage. Agreeing, Dr Yeo said: “Having a title tends to raise awareness. We congratulate ourselves for getting Botanic Gardens (listed), but what’s next?” He called for a public platform where people could “discuss heritage openly and transparently, be it our local community heritage, national heritage or world heritage”.
Responding to media queries, the National Heritage Board (NHB) said it has no plans to nominate other sites in Singapore for UNESCO World Heritage Site status. NHB CEO Rosa Daniel said putting up a bid for such a status requires a lot of resources from government agencies and the community, and the work continues even after a successful inscription. But the board is open to exploring possible sites with experts and stakeholders, she added.
While most may expect a World Heritage site to be of certain grandeur, such as China’s Great Wall, Dr Chua felt that in Singapore, it could be any place that is “deeply valued by the local community and which meets UNESCO criteria. 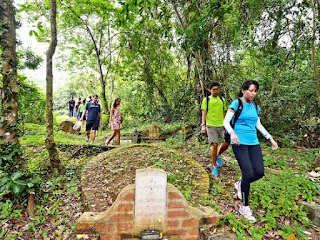 Members of the public on a guided tour of Bukit Brown Cemetery. Photo: Robin Choo/TODAY