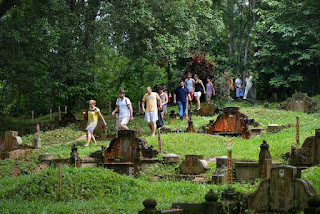 National Development Minister Khaw Boon Wan has said that Singapore could have a second Unesco World Heritage Site after the Botanic Gardens.
We need look no further than Bukit Brown Cemetery.
As one of the largest Chinese cemeteries in the world outside of China - in terms of its number of graves, with its oldest grave dating back to 1833 - Singapore will be doing this historic landmark grave injustice by not nominating it for the accolade.
Although a Chinese cemetery, Bukit Brown can be said to be uniquely Singaporean, being named after English trader George Brown and having the largest tomb in Singapore - that of late businessman Ong Sam Leong and his wife - which is "guarded" by statues of Sikh soldiers instead of traditional Chinese stone lions.
Peranakans, too, are buried there, such as the Dondang Sayang Association's founding member Koh Hoon Teck.
Bukit Brown is also the final resting place of pioneer entrepreneurs and philanthropists, such as Tan Lark Sye, Ong BoonTat, Lim Chong Pang and Chew Boon Lay.
Bukit Brown has huge potential. Spruced up, it could become an even bigger draw to both tourists and locals.
Already, foreigners are joining Singaporeans in exploring not only the graves, but also the area's sprawling grounds, which are teeming with local flora and fauna that have been left to thrive almost untouched for decades.
Bukit Brown could be converted into a heritage park with an education and research centre for students, conservationists and other visitors to learn not only about Singapore's natural history, but also about the Chinese diaspora in Nanyang - as South-east Asia was known in the old days.
I hope the Ministry of National Development and other relevant bodies will consider having Bukit Brown nominated for Unesco World Heritage status, so that it may join the ranks of its counterparts in New Orleans in the United States and Bukit Cina in Malacca, Malaysia, as world renowned heritage attractions.
Edwin Pang
Debate News