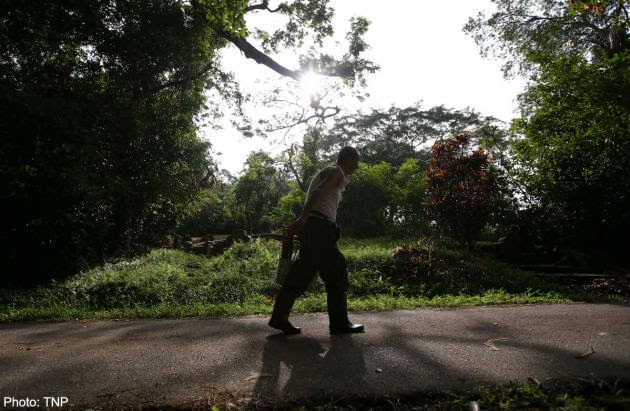 Under a shelter made from a canvas sheet that hangs from a tree, Mr Chua Tiam Koon cheerfully recounted his experiences at the cemetery.

Mr Chua, 83, is a cemetery caretaker. He has been one at the Bukit Brown Cemetery for 65 years.
In between contagious laughter and a hacking cough, he told The New Paper in Hokkien: "I grew up in the village nearby and we used to play around here. I have been doing this for a long time. I prefer not to sit around at home doing nothing."

His two children worry about the elderly man working such a physically demanding job. They have offered to support him financially so that he does not have to work, but the independent man refuses to hang up his gardening tools.

"My children don't want me to work any more. They even sold my mower worth $400 to $500 to stop me, but I bought it back behind their backs and continued working," he said.
Frail but not incapacitated, he cycles 6km on his trusty 30-year-old bicycle from his three-room flat in Toa Payoh to the cemetery at 6am every day. He tends to 20 graves a day and finishes at 5pm, making about $8,000 a year.

Families pay him about $100 a year for each grave.

Mr Chua used to work as an assistant manager at a canned food company and tended to the graves only during the Qing Ming Festival.

Now, on top of tending to graves, he collects and sells cardboard for some extra cash.
But his main motivation is not money.

"I can earn only a few thousand dollars a year. My children ask me why I want to continue working when I have enough money for food and clothing, but it is not about the money. And it is good exercise," he said.

Mr Chua grew up in a village on what is now Lornie Road. He recalls playing and helping out at funerals in the cemetery as a boy in return for some money and a free meal.

Another cemetery caretaker who grew up in a village near Bukit Brown Cemetery is Madam Zhang Suan, 90, who has been at it for more than 50 years.
Caretakers like her often set up makeshift shelters for themselves, so as to find respite from the sun and rain, or rest their tired legs.

Her shelter was deep inside the cemetery, and required trekking through the forest and across a small bridge made from old doors to get to.

Madam Zhang declined to speak with us, but her landscaper son Soh De Yi, 58, told TNP about his mother: "She has been working at the cemetery every day for more than 50 years. When we lived in the kampung, it was her job. I have helped her clean graves since I was young.

"She might be 90 but she still has a lot of energy." Most of the cemetery caretakers are above 50 years old, and the trade is a dying one, say heritage guides such as Mr Andrew Lin, who conducts tours at Bukit Brown Heritage Park on weekends.

"Most of the caretakers are original members of the villages. Not many people want to do it any more because it is hard work.

"Most people who do it have lived there their whole life, it is a tradition that is passed on from generation to generation."

Another heritage guide, Mr Raymond Goh, said: "Over the years, the caretakers would have
developed an affection for the graves they have looked after.

"I remember one of them saying, 'I have better job offers elsewhere, but if I leave, who is going to take care of these graves?'"

Mr Chua sometimes wonders if the younger generation has respect for their ancestors.

"Once, I caught people having sex here. My friends threw their clothes away and they had no clothes to wear.

"They wrapped themselves in newspapers and had to borrow clothes from others," said Mr Chua with a smile.

Qing Ming Festival, or Tomb Sweeping Day, falls on either April 4 or 5 every year.
This year, it fell on April 5, but some people perform the rituals ten days before and after the actual day.

It is traditionally observed on the 106th day after the winter solstice, calculated according to the lunar calendar.

According to a guidebook published by the Singapore Federation of Chinese Clan Associations in 1989, Qing Ming originated 2,500 years ago as a spring festival.
Chinese all over Singapore visit the cemeteries or columbariums during the festival. They clean up the graveyard, repaint the tombstones, and burn joss sticks. Candles are also lit, and gifts and food are offered to the dead.

While columbariums and most of the temples do not keep track of visitor numbers and as such were unable to provide figures, a spokesman for San Qing Gong temple in Bedok North observed that there has been an increase in numbers over the past few years.
News Stories