SINGAPORE - Ninety-year-old Zhang Suan has been taking care of the tombs on Bukit Brown for half a century, and she is still going strong.
She can recognise by sight, all the relatives who visit the cemetery, and will point them to the right tomb, said her son Mr Su De Yi, 58.
"Everyone calls my mother 'Ah Suan Ah Ma'," Mr Su told Shin Min Daily.

Her moniker translates to "Grandma count" or "Grandma calculate" in Mandarin.
He told Shin Min Daily: "I have helped her clean the graves at Bukit Brown since I was young. She is 90, but still full of energy. She can't stop, and is always looking for something to do."
Being the custodian of so many graves, "Grandma calculate" starts getting busy after Christmas.
They take care of more than 100 graves, Mr Su said.
The pace picks up closer to Qing Ming, the "tomb sweeping" festival for Chinese families, which was on Sunday.

Her memory is also superb as Mr Su recounted to Shin Min Daily: "She remembers every family she has met. When they come again the next year, she will bring them to the tomb of their relative. They all say she's like a computer."

Madam Zhang and Mr Su charge a minimum of $50 to take care of a tomb for a year. They charge more for larger tombs, but will also give a discount if a family is in financial difficulty.
Mr Su told Shin Min Daily: "We have met people who claim they never asked my mother to help them sweep the tomb of their relative, and refuse to pay. But her memory is so good, she couldn't have made mistake."

Since 2014, Mr Su and Madam Zhang have been taking care of Mr Lim Yew Teok's grave. Mr Lim died in 1925, and his family made the news because of a tussle over his inheritance, worth more than $100 million.

His fortune was held in trust, and to be distributed only 21 years after the death of his last surviving child. His will has come before the court five times since 1938 to be interpreted.
When his great-granddaughter Lim Chhui Ngor died unmarried and childless, a number of claimants came forward.

The High Court ruled in 2009 that none of them were entitled to the money as they were related to Miss Lim but not her great-grandfather.

Mr Lim's grave has been untended and Madam Zhang was asked by Asia Paranormal Investigators to look after it.

The co-founders of of the society, Charles and Raymond Goh are experts on old tombstones. 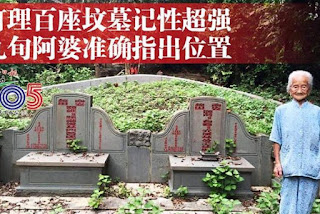