January 01, 2015
It was around Sep 2006 when Charles and I was tipped off of a mysterious tomb in a carpark in Joo Chiat.

We went to investigate at that time.

What lies beneath a bush in a carpark in Joo Chiat? 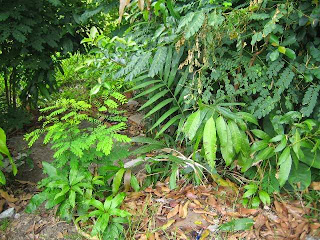 It was a half buried tomb of a lady 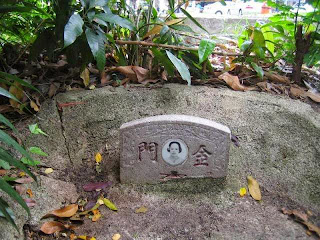 From the tomb picture, one can see that the ancestral place mentioned in the grave is Kinmen.  there is also a surname Lee inscribed in the grave as well. 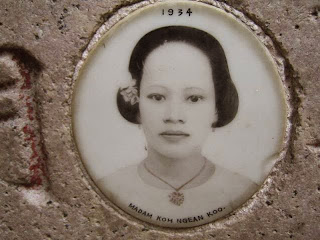 A closer look at the picture show the name Madam Koh Ngean Koo and the year inscribed as 1934.

She should be a nonya based on the jewellery she was wearing.  Why was her tombstone in a Joo Chiat carpark? 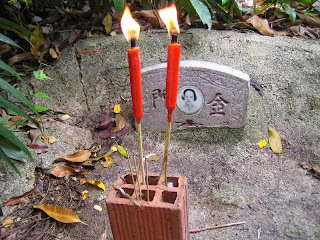 We asked those who lived nearby about this mysterious tombstone.  Some said that this used to be a Malay cemetery and Mdm Koh was related to a Malay family and so was buried there.

Some people would come here, gave offerings and ask for 4D.

There is a possibility raised by Charles that this tombstone may have been implanted and that there is no body buried there at all.

This is because the tomb appear to have been broken off along the ridges with the cement as seen here:

A 1958 map of the place show that the area is not a cemetery at that time.

As we could not get any more information,  I lighted up some candles and paid my respects to her.  Let us solve the mystery so you can rest in peace, I said to her at that time.

Sometime later Shin Min News,  Wan Bao and even TV On the beat showcased this mysterious tomb, but nobody knew the answer.

I would think of this mysterious tomb and the lady often,  as the photo was so clear that it quite imprinted on my mind .

As typical of other years,  on New Year Day, I would give offering and thanks at the temples near my house.

This time,  I decided to go to a Buddhist temple.  After praying, I went to take a look at the columbarium.   There are thousands of urns there.

My eyes did a quick scan.  A picture on the urn looks familiar . 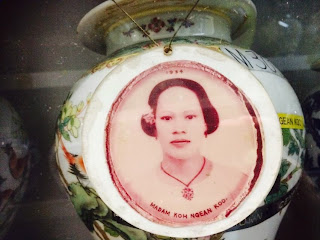 Yes, it is the mysterious lady on the Joo Chiat tomb.

The words on the urn mentioned that Mdm Koh Ngean Koo was exhumed from Bukit Brown Cemetery on 29 Oct 1982.

I did a quick check on the burial registry and quickly find the burial entry:

It confirmed the name of Koh Ngean Koo who died on 30 March 1934 at the age of 29 years.  She was the wife of Lee Keng Kee, confirming the Lee character on the tombstone.

So 6 years after I paid my respects to her tombstone in a carpark in Joo Chiat, I have solved the mystery. She was actually exhumed from Bukit Brown cemetery
in 1982, and a piece of her tombstone was not crushed but saved by somebody, who probably felt the heart not to destroy the headstone containing the nice picture.

There are other things housed together next to the tombstone, so it must be somebody, some karang guni perhaps who collected old discarded goods. 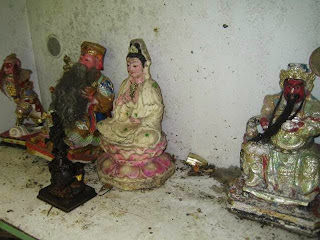 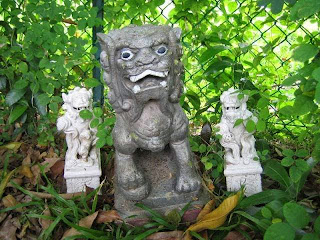 It is never too late to solve a mystery, and a good start to another great year ahead.

A happy and healthy new year to everyone for 2015.