THREE more aged tombstones have been uncovered in Outram - mere weeks after a 150-year-old grave was found there, back in September.

Grave hunter Charles Goh stumbled upon the three relics last month in a wooded area, just metres away from his earlier find.

But the four graves are set to make way for an open-air carpark for Singapore General Hospital (SGH) and other health-care facilities in the vicinity.
Excavators have already swept in to clear trees and level the hilly terrain, which is about the size of two football fields.

The Ministry of Health (MOH), which owns the land, said the new carpark - bounded by MacAlister Road and SGH's multi-storey carpark H - will "better provide for the needs of patients and visitors to SGH and the other health-care facilities in the area".

The Straits Times understands that the new carpark will have approximately 620 spaces, and could be ready by July next year.

Nurse Brenda Lee, 56, said it might help address parking woes in the area. She said: "It can get very busy during peak hours. Some carparks here provide valet services because the wait can get very long."

Still, Mr Goh, 46, hopes the authorities will leave the tombstones intact as they are remnants of the now-defunct 1859 Tiong Bahru Cemetery and serve as valuable historical markers.
The construction safety manager said: "They have remained untouched, standing in a single row, over the past century.

"They should be left as they are, as a reminder of how the area has evolved over time."
He called for the ministry to give more time for the graves to be studied: "We need historians, researchers and relevant clan associations such as the Hokkien Huay Kuan to do a thorough documentation of the tombs before they are exhumed."

When contacted, an MOH spokesman said work around the tombstones has stopped. The ministry has also notified the National Heritage Board (NHB) and the National Environment Agency (NEA), which oversees public exhumation works.

NHB said research work on the tombstones has started.

The MOH spokesman added that it "will work with NEA and NHB on the appropriate management of the graves, including putting up a notice in the public domain to alert next-of-kin who wish to claim the remains".

The SGH area is home to institutions such as the Duke-NUS Graduate Medical School, the Singapore National Eye Centre and the Health Sciences Authority. By 2020, the Outram Community Hospital will also be there.

Other Tiong Bahru Cemetery graves were exhumed and relocated to Greater Bukit Brown after the 1920s to make way for SGH and housing projects.
melodyz@sph.com.sg 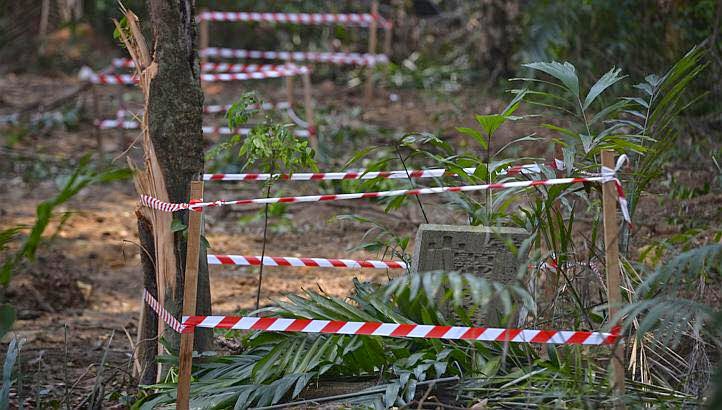 Work around the aged tombstones uncovered in Outram has stopped, a Ministry of Health spokesman said. The ministry has also notified the National Heritage Board (NHB) and the National Environment Agency, which oversees public exhumation works. NHB said research work on the tombstones has started.