Tomb uncovered in Outram 150 years on 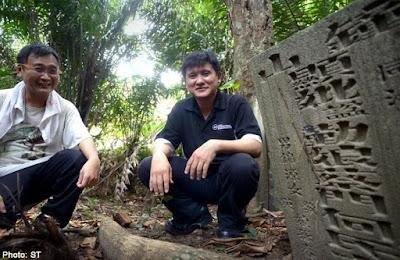 A forgotten tombstone in the heart of Outram has been found, on the heels of the rediscovery of an abandoned reservoir on Keppel Hill last month.


He made his latest find last month while bashing through the forest hunting for remnants from old cemeteries in the Tiong Bahru area.

"I often walk by the forested area, but I had no idea that it housed an ancient treasure and relic from Singapore's first few Hokkien cemeteries," he said.

The construction safety manager had also stumbled across the lost reservoir near Mount Faber back in 2005, without knowing it, while he was tomb-hunting.

The lone grave in Outram has stood the test of time even as modern Singapore grew around it, staying untouched in its original spot since the 1860s. It is sandwiched between the defunct 1828 Tiong Lama and 1859 Tiong Bahru cemeteries.

Mr Goh hopes the tomb, which belongs to Madam Ho Koon Neo, will be included in heritage tours of Tiong Bahru estate.

Both cemeteries were exhumed after the 1920s to make way for the Singapore General Hospital (SGH) and later housing projects.

Most of these exhumed graves now rest in Greater Bukit Brown, which Mr Goh and his brother Raymond, 50, a pharmacist, have been researching and documenting.

The brothers, who also co-founded Asia Paranormal Investigators, realised some relocated tombs and urns in Greater Bukit Brown had been haphazardly rehoused, leading them to believe that some reburials were done in a hurry.

Mr Goh said: "We then wondered if some graves had been left behind from the Tiong Lama and Tiong Bahru cemeteries."

After consulting maps, he narrowed his search down to a forested parcel of land about the size of two football fields. Bounded by College Road, Jalan Bukit Merah and MacAlister Road, the forest is part of the SGH compound.

According to an 1884 land deed, the hilltop graveyard where Madam Ho's tomb rests was owned by a Chua Bian Kay.

The 1m-high tombstone states that Madam Ho, who married into the Chua family, was from Zhong Shan in Fujian, China. Her exact date of death is not listed, although her grave states that she died during the 1862-1875 reign of Chinese emperor Tongzhi.

The Goh brothers, who have hunted down hundreds of graves including those of pioneers Seah Eu Chin and Chia Ann Siang, are appealing for Madam Ho's descendants to come forward.

They hope the National Heritage Board (NHB) clan associations and other volunteers can help do more research on the country's pioneers.

An NHB spokesman said the board looks forward to doing research on the grave with the brothers to "shed more light on the discovery".

Meanwhile, Mr Kelvin Ang, the chairman of Seng Poh Residents' Committee in Tiong Bahru, said residents who conduct heritage tours and talks on the conservation estate might consider including the tomb as part of their talks.

He added that the find proves "history is all around us". "Mr Goh's discovery adds to the historical knowledge of the area and, hopefully, as we go on, more stories can be built upon such finds."

This article was first published on October 15, 2014.
News