Rise of the Qilin

June 05, 2014
A Qilin is an auspicious creature known in Chinese mythology since ancient times. It generally signify prosperity, luck, success, longevity and protection.
The male is Qi, while the female counterpart is Lin, and is said to live up to 2000 years.
It has a gentle disposition, although it has ability to attack, but it doesn't attack humans,
nor does it kill plants and insects.

Qilin has a head like a dragon and shaped like a horse or deer.  The male has a single horn, while the female has none. It can spit fire, its voice like thunder.  It is said its appearance herald an era of peace and prosperity, and is usually associated with a saint or great person.

Because of this legend, people believe that Qilin can bring forth children who can glorify the family, hence the term Lin Er.  So to get a son, it is common in those days to pray to Qilin  There are also suspicious drawings and painting of Qiling bringing forth children, illustrated here in this vase: 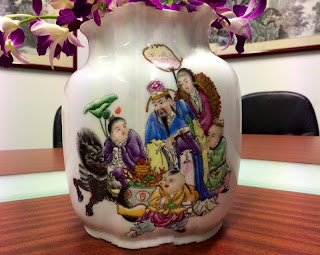 Now you may wonder does this Qilin have to do with Bukit Brown?

It all happen some time ago when I was asked to conduct a private tour for some friends.
Among these friends was actually a friend of my wife.  The family turned out to be the descendants of a prominent
businessman Wee Teck Seng in the past. 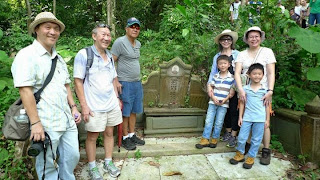 Norman Wee and his family at the tomb of his grandfather. He and another brother are the only 2 surviving grandsons
of Wee Teck Seng.

As Norman could not read Chinese very well,  we have to translate the inscription from the tomb of Wee Teck Seng for him
to understand more about the life history of his grandfather:


The 1st panel(WTS1)  traced his early beginnings as follows: 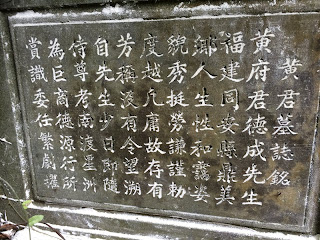 Wee Teck Seng came from Fujian Tong Ann Province Ding Mei Village.
He was a kind handsome gentleman, hardworking and honest, and was held in great esteem.
From a young age, he followed his father to Singapore.
He was appreciated by a famous business concern : Teck Guan Chop and took on heavy responsibilities. 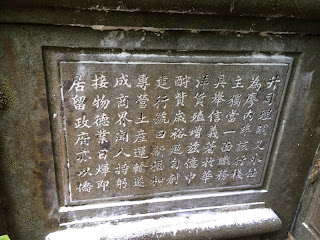 He was soon promoted to be manager in charge and was then sent to Riau to head and handle the business there singly.

He was much trusted and started to deal with Chinese and Western goods,  accumulated his wealth and started his own business
Sin Hock Hoe, primarily dealing with local produce and transport, and soon became a famous businessman and was regarded
as a community leader by the local authorities there. 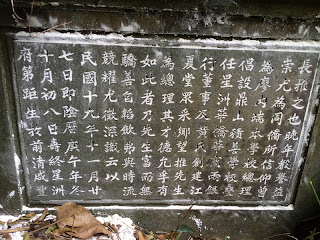 He was the manager of Riau Tuan Puan School and also help to set up Ding Shan School.  He also became the directors of 2 Singapore Chinese banks
(Chinese Commercial and Overseas Chinese Bank) and also became president of the Wee Clan.

He was rich, but generous and humble at the same time. 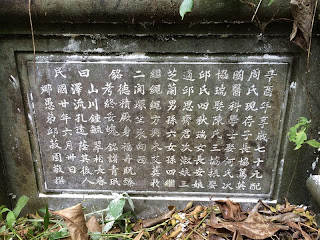 Now Ding Mei village has been in existence for a long time since the Ming/Qing dynasties, where it first appeared as a single street lined
by shops.  There was a small port  there whereby the boats would go to Amoy, Tong Ann to overseas. It started to decline during
Republician period. Now there are 2 sub villages, with a total of 820 households and 2460 residents.

There was a small hill on one side of the village, shaped like an inverted cauldron, hence the village was called Ding Mei
Ding = cauldron
Mei = beautiful

Since the village as at the tail end of the hill,   a previous old name for the village was Ding Wei  (Cauldron Tail) and was  later changed to  Ding Mei
to beautify the name.

Wee Teck Seng was the president for two successive councils for the Wee clan in 1926 and 1927 as listed in one of the earlier issue of Wee clan association magazine. 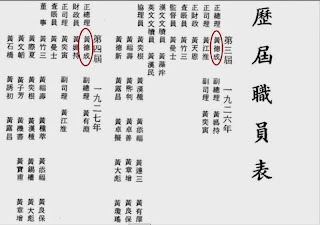 Wee Clan, which has its root since 1924,  is now known as Nanyang Huang Shi Chung Huay and is currently located at Geylang 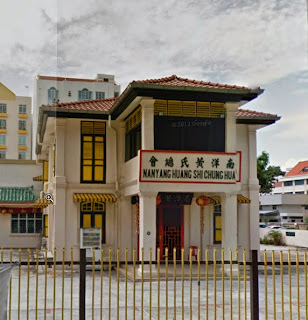 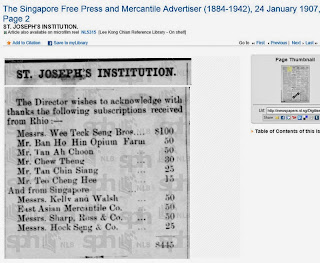 There were many burial grounds in Singapore in the past.  Esp in the late 1920s, early 1930s, when these burial grounds were cleared, many of the tombs
were relocated to the municipal cemetery Bukit Brown.    In Blk 3,  there are at least 5 such clusters, and one such cluster belong to the Wee clan.
Other clusters were previously from Cheang Hong Lim burial ground,  Tiong Bahru, Alexandra Road etc. 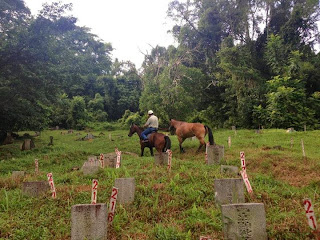 A cluster of tombs belonging to the Wee Clan, seen here with horses from the Polo Club. This cluster is affected by LTA road project, and will be cleared soon. 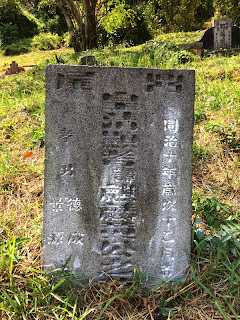 Among the cluster of Wee clan cluster,  standing solitary, but just a little distance away,
there is one particular tomb which struck some of the Brownies as remarkable and has deep and nice inscription.
First the tomb has an inscription year Tongzhi 10th year 12th lunar month (ie 1872 Jan 10 - Feb 8)

It also has the special name of Qilin.

Next is the ancestry village inscribed in the tombstone :  Ding Wei, which is a rarely seen name , which was the old name for Ding Mei, the village whereby
Wee Teck Seng trace his origin.

There are 2 sons inscribed in the tombstone,  Teck Seng and Eng Guan.  From the date inscribed in early 1872,  Wee Teck Seng would be 11 years old,
and his brother Eng Guan would be younger from the position of the hierarchy of the names.

From the epitaph of  Wee Teck Seng's tomb, we know that he followed at a young age with his father to Singapore and from there he was promoted by his employer to be the
head of the Riau branch.

Since Wee Teck Seng Bros made a donation in 1907 to SJI, we know at he has at least a brother.

There are actually very few Ding Mei / Ding Wei tombs in Bukit Brown,  and none other than this Wee Qilin tomb that
we can match the story told by the epitaph, the timeline and other matching facts.

Therefore we can conclude that this tomb uncovered would be the father of Wee Teck Seng.

Wee Teck Seng eldest son was Wee Hiap Tock (Dr H T Wee) who was born in Tanjong Pinang in 1894.
ST reported about him in an article on 20 Oct, 1935. He was a doctor who was a past president of the Chinese Association, a Municipal Commissioner and a Justice of Peace.

The law gazette in an obituary has this to say :

We regret to record the passing away on 11 July 2005 of Mr Harry Lee Wee, MA, LLM (Cantab). Known as
'Harry' to his friends and colleagues, he was a very senior member of the Bar, and President of the Law
Society in 1975 and 1976, serving the Council since 1974 in many capacities and on various committees.
Born on 25 January 1924, the eldest son of Dr Wee Hiap Tock and Rachel Hoahing, Harry studied at St.
Joseph's Institution where he did his School Certificate in 1938. A year or so later, he left for the United
Kingdom to study law at Queen's College, Cambridge. An industrious and conscientious student, he
preferred life as a solicitor which meant three years of Articles after obtaining his degree and this he did in
a Cambridge county solicitor's office well known for its wide range of legal practice. In the meantime he
obtained his LLB.

On returning to Singapore, Harry did his pupillage at Rodyk & Davidson and was called to the Bar on 26
November 1948. He first practised in the firm of CJ Koh & Company at Bonham Building and subsequently
joined Braddell Brothers. Quite apart from his love for the practice of the law, Harry was also interested in
the academia and lectured for many years, civil procedure on a part-time basis at the NUS Law Faculty for
a small honorarium. Despite his very busy schedule, Harry was also dedicated to public service, and was
for many years, very active in the YMCA.

One of the most honourable things he did for the legal profession was to open his door to pupils when it
was very difficult for law graduates to obtain Chambers to do their pupillage, and for this he will be
remembered for a very long time by the number of grateful pupils who have successfully established
themselves in practice, the legal service, and even the judiciary. Trained as a solicitor, Harry had his own
style not generally followed by other masters in that when interviewing clients he would call in his pupils to
take notes and thereafter explain to them why he advised clients the way he did. As one can imagine, this
is a time-consuming exercise for any busy practitioner. He wouldn't pay his pupils, always saying that he
did not want to use them as cheap clerks. He was there to teach and they were there to learn.
Well-versed in chancery law, Harry took in a lot of trusts work and conveyancing, and other practitioners
frequently sought his opinion on these matters.

It was thus with great honour that I bought the descendants of Wee Teck Seng to his father's tomb in Bukit Brown, just before the area was to be cordoned off for exhumation for the road project cutting across Bukit Brown. 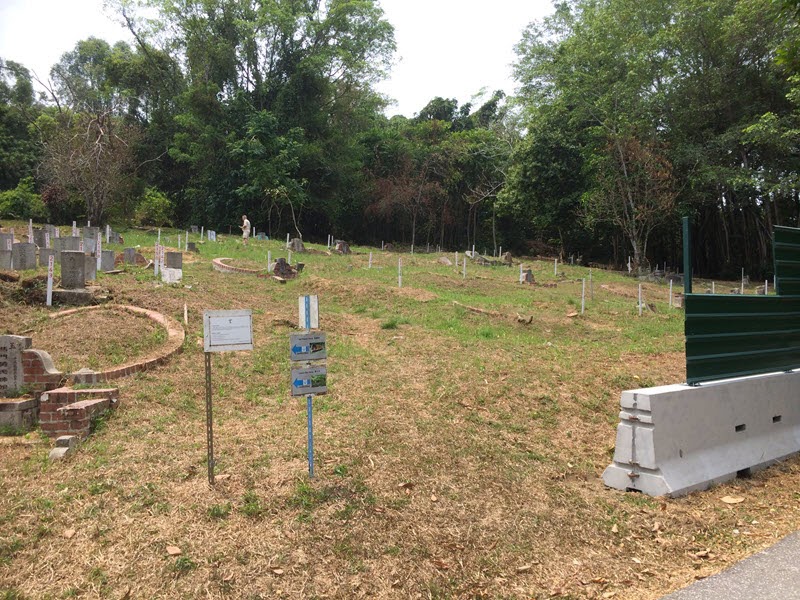 Raymond with Norman Wee, grandson of Wee Teck Seng and Mrs Ann Wee, wife of Harry Lee Wee,
shortly before the area was cordoned off and sealed for exhumation. 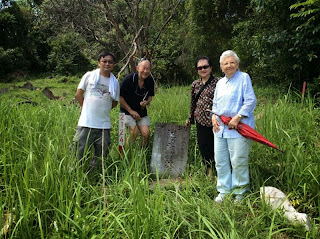 Mrs Ann Wee is often described as the founding mother  of social work, and is an inductee to the Singapore Women's Hall of fame

Here in the tomb clusters of Bukit Brown, a tomb inscription with the auspicious name of  Qilin has lived to its auspiciousness.  Its descendants has become doctors, lawyers and other professionals who contributed greatly to society.

Each tombstone in Bukit Brown tells a journey from their ancestral home in China to Singapore, and each has its own unique story to tell, whether great or small.

This particular tombstone tells a great story and  is a historic and heritage tombstone dating all the way to the 1870s.  His descendant realized that this tombstone reflect the stories of his ancestors' journey to Singapore. 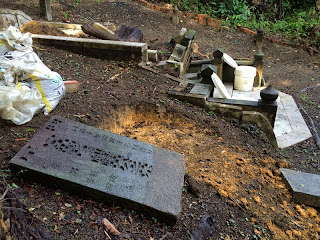 After the exhumation,  they decided to re-erect the tombstone near to that of his son, who together with his children went on to give honour to his family, and more importantly help to build this nation that is our country, Singapore.  The tombstone of Wee Qilin will soon rise up again, to be next to his son in Bukit Brown.

Very soon, the descendants will be off to another trail, that of Tanjong Pinang, to trace the roots of ancestors, from China to Riau to Singapore.....