The relocated tomb of Neo Jin Quee, founder of Hong San See temple, a National Monument was hidden in the depths of Bukit Brown.
Although local scholars and historians have noticed his tomb before, they are unable to recognize his tomb in the past because he only used a posthumous name.

Tomb seeker Raymond has noticed this set of tombs before, so has scholar David Chng, who has recorded a few of these graves' inscription in his published book of tombs' inscription, but he was not aware
that Neo Zhen Rong was actually Neo Jin Quee.

Recently Raymond combined forces with other historical researchers who are also Brownies - Walter Lim and Yi Han to research and ascertain that this Neo Zhen Rong was indeed the leader who in the Bing Shen year of Daoguang reign (1836) founded the Hong Shan See temple in Tanjong Pagar.

There has been very little info on this founder Neo Jin Quee and his special relationship with Hong San See  until 5 years ago when Yik Han and Loo Say Chong combined research to find that Hong San See was founded in 1836 headed by Neo Jin Quee.  Hong San See has been in the news recently for its numerous awards for its restoration project. 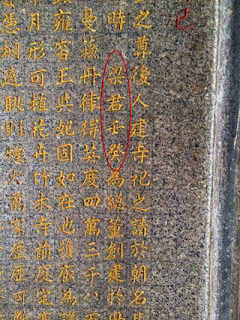 But for a long time,  other than being the founder, his identity was still a mystery, until Yik Han managed to get hold of a genealogy book published in Taiwan on the Genealogy of the Neo Clan in Shishan Fengpo,
and found out that Neo Jin Quee was actually the younger brother of Neo Bee Kiat and Neo Tian Seng

Among the 3 Neo brothers, Neo Bee Kiat (1787 - 1839) was the most well known, in fact he was the Teng Choo  of Cheng Hoon Teng temple in Malacca, and also in the board of directors of Penang Kwang Hock Gong.
At that time, being a Teng Choo in Cheng Hoon Teng was equivalent to the head of the Chinese community, and Kwang Hock Gong was also an important Chinese organization. 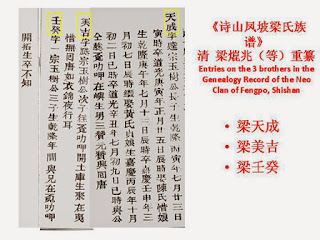 When Telok Ayer Tian Hock Keng was built in 1840, Neo Jin Quee donated 24 dollars, and his name can be found in the temple plaque dated 1850

As for the Neo genealogy book edited in 1884,  it was revealed that the father of the Neo brothers was Neo Zhi Shu (Assumed name  : Yushu) , who was born during Qianlong dynasty and later immigrate to Malacca and was buried there. 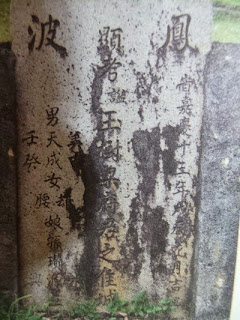 There was also little info on Neo Jin Quee, except that he first started his business in Malacca together with his brothers.

Raymond said that he already noticed Neo Zhen Rong 1843 tomb when he was researching old tombs in Bukit Brown. He have also heard about Yik Han and Loo Say Chong's research and also felt that this tomb
was somewhat related.  Later from the National Archives, he found the reburial records mentioning the names of Neo Jin Quee, his son Neo Chang Hock, and their wives E Boon Neo and Chee Im Neo,
and together with Yik Han and Walter, they decided to do the field research to verify and confirm his identity.

From the tomb of Neo Zhen Rong, they saw that he has two sons Chang Ann and Chang Hock, from this they are able to confirm that Dun Mu was the posthumous name of Chang Hock.
Chang Hock's tomb was erected in the year 1867, and has two sons Guan Chye and Guan Meng. 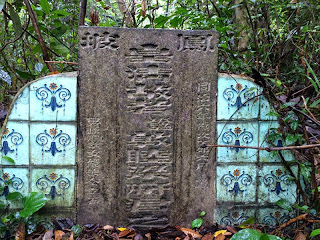 Neo Jin Quee wife E Boon Neo apparently lived much longer than her children, for her 1883 tombstone was erected by her grandchildren Guan Chye and Guan Meng. 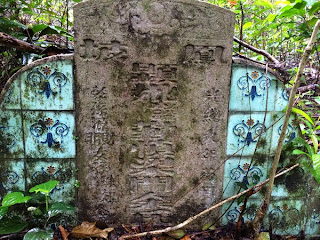 As for Chang Hock's wife Chee Im Neo, it was erected on 1907 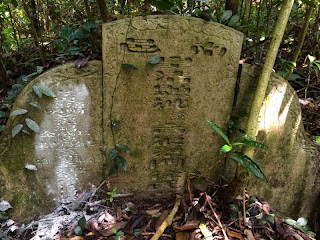 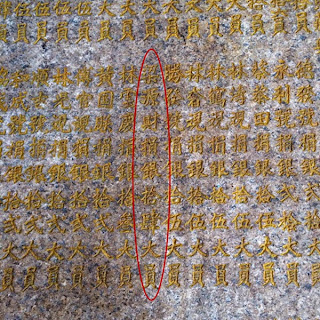 Recently these 3 Brownies bought this reporter to visit this Neo cluster and found out that the 4 tombs are reburied in a single line.   The tomb of Neo Jin Quee was the hardest to identity as a tree has grown in front of it
and wrapped its branches around the tombstone. From this, it was deduced that nobody has visited them for a long time. 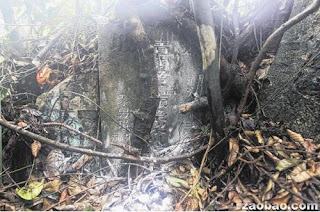 The relocated tomb of Neo Jin Quee was wrapped by tree branches, but the names of his sons Chang Ann and Chang Hock could be clearly seen.
The story of Neo Jin Quee family reflect the immigration stories of the earliest Lam Ann pioneers to Singapore

The 4 tombs would have been rebuilt around the same time as they have the same tiles decorated on their tombs except for Chee Im Neo, who has the descendants' names inscribed on them.

As for where this cluster originated from, Walter thinks that further research is needed, as besides the old Heng Shan Teng, there was also many private burial grounds. 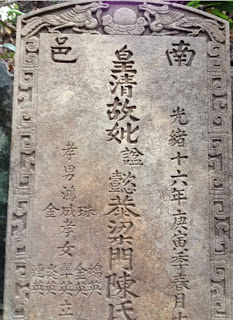 As for Neo Guan Chye's wife Mdm Tan's tomb, there was even a fengshui couplet  : 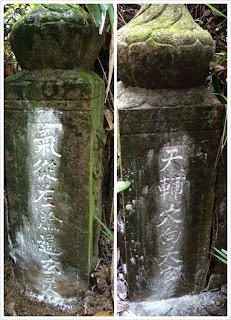 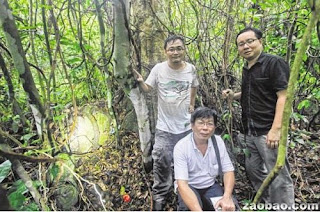 Raymond, Walter and Yik Han at the tomb of Neo Jin Quee, founder of the National Monument Hong San See