May 12, 2014
ST Opinion, May 12, 2014
By Leonard Lim, Assistant Political Editor
THE large, spreading banyan tree once had such a thick canopy that little sunlight could filter through, hindering the flourishing of any plants below.

But, to borrow this metaphor of the State made famous by former minister George Yeo in 1991, it has been pruned somewhat in the past couple of years.

Consultation and engagement have become the buzzwords of government policymaking in a changed political landscape, with a more well-educated, well-travelled populace becoming more assertive and vocal.

There may be no better time for civil society - the wide spectrum of organisations operating outside the government and business sectors - to test this pledge to listen more, and in the process carve out a more influential role for itself.

They can take heart from the naming of Mr Tan Chuan-Jin last year as the Government's unofficial point person for engaging with non-governmental organisations (NGOs). Mr Tan is Manpower Minister and a member of the fourth-generation leadership.

In 2012, Law and Foreign Minister K. Shanmugam met gay activists to discuss matters such as discrimination and the anti-gay sex law Section 377A.

The State's engagement with other interest groups on animal rights, heritage and conservation as well as environmental awareness has also increased.
Civil society has scored significant victories recently as well, influencing legislation and government policy.

Since the start of last year, foreign maids - either with a new work permit or a renewed one - have been entitled to a day off every week, or must be paid a day's wages in lieu.

As contracts last two years, all maids will, by next January, be on new contracts that have to abide by the rule. The change came about after a decade of lobbying from groups championing the rights of migrant workers.

Laws on sexual crimes have also been repealed.

It started in late 2011, after an article highlighting a little-known section of the Evidence Act was put up on website publichouse.sg. The Act allowed a man charged with rape to discredit the victim by digging into her sexual history, and showing she is of generally immoral character.

Mr Andrew Loh, who runs the site, circulated the post to several ministries to get a response.
He received a call from the Law Ministry suggesting a meeting, but turned it down as he felt the Association of Women for Action and Research (Aware) was the expert on the topic.

Mr Shanmugam eventually met representatives from the women's rights advocacy group and later started the process of amending the Act.

Nature lovers, who in 2001 succeeded in getting the reclamation plans for the Chek Jawa wetlands area shelved, also extracted concessions on Bukit Brown cemetery recently.

Several nature and heritage groups opposed the construction of a road that would slice through the historic graveyard.

It is the largest Chinese cemetery outside China, and among the thousands of graves are those of philanthropist Gan Eng Seng and Lee Hoon Leong, grandfather of founding prime minister Lee Kuan Yew.

After months of engagement, a compromise was reached and the authorities changed the road's design so that the number of graves exhumed fell from 5,000 to 3,746.

But there are also many examples where civil society's push for change was not successful.

They argued that the parliamentary Bill placed too much focus on alcohol as the cause of the riot, and this might influence a Committee of Inquiry's deliberations.
Several non-partisan Nominated MPs criticised aspects of it. But it was passed, with the Government explaining that the new laws would give the police powers in the neighbourhood for a year until longer-term measures could be enacted.

Other recent civil society proposals that were rebuffed include calls to introduce a poverty line to reduce income inequality, and the withdrawal of licensing regulations of news websites, which some saw as onerous and curbing free expression.

But groups can take heart that "the Government has and will continue to engage civil society as an essential partner in dealing with the important issues that face Singapore", as Mr Shanmugam's press secretary wrote in a letter to The Straits Times Forum page last November.

Still, even as the political leadership indicates a greater willingness to engage, there is always the lingering question mark over whether a civil society group's actions or statements are deemed to have crossed into the political arena, thus risking censure from the Government.

This longstanding stance of politics and political comment belonging only in the realm of party politics can be traced back to the fledgling days of the People's Action Party.
In the 1960s and 1970s, leftists used trade unions and cultural groups to garner support against the party.

In April last year, the lawyer was accused by the Government of using the Association of Muslim Professionals (AMP) as a platform for pursuing partisan and racial politics, a claim which he denied.
He resigned from his AMP leadership positions, saying he was told the Government had taken issue with his online comments and participation in political events that he said he did in his "personal
capacity".

In the wake of the furore, Mr Lawrence Wong, Minister for Culture, Community and Youth, said in May last year that the Government welcomes feedback on policies even if they may be critical, as this helps improve public policy for the benefit of all Singaporeans.

The goals of civil society in wanting social transformation, however, mean these limits will inadvertently be tested on occasion.

Still, if the saplings under the banyan tree are to take root and thrive, much will depend on how willing Singapore's civil society is to push the boundaries and extend its reach in this new landscape.
limze@sph.com.sg 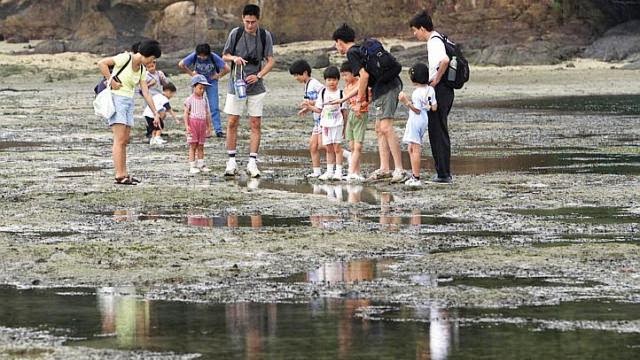 Nature lovers at Chek Jawa wetlands. In 2001, environmentalists and nature lovers succeeded in getting the reclamation plans for the wetlands area shelved. Recently, they also extracted some concessions on plans to build a road through the historic Bukit Brown cemetery. -- LIANHE ZAOBAO FILE PHOTO
Debate News