Removing one of the last remaining embodiments of a shared history risks eroding the spirit of national unity that S'pore has worked so hard to build.
By Linda Lim

Mr Chew argues that Bukit Brown, now a 2014 World Monuments Watch site, should be preserved because it embodies our heritage and history, a habitat for rare fauna, and a precious green space in an otherwise densely-settled, highly urbanised environment. He proposes that the site be "developed as a new, transformed national heritage park . . . a place of sanctuary, sanctity, sacred burials, cultural and historical heritage, education, research to our origins and identity as a nation . . . a unique tourist attraction, a park that caters to the recreational needs of citizens and visitors alike".

In response, Mr Goh argues that given Singapore's land constraint, it is a "luxury" to leave such a large tract of land undeveloped, noting that Singapore has already disposed of hundreds of cemeteries, and to preserve Bukit Brown in particular is to cater to the "sectarian" interests of the Chinese majority "to the exclusion of the interests of citizens of other races".

Mr Goh misreads Mr Chew, who clearly states that his proposed Bukit Brown Heritage Park "will be a new public space that will cater to the physical, educational, cultural, environmental and economic needs of 7 million Singaporeans", not just the 78 per cent who happen to be of ethnic Chinese origin.

Mr Goh also does not consider that other land in Singapore (besides Bukit Brown's 162 ha) is available for 50,000 housing units to be constructed, and that the prior loss of other cemeteries actually increases the scarcity value (as a place of heritage and recreation) of Bukit Brown.

Social benefit-cost analysis is the standard tool economists use to assess the value of any particular public investment project. It is "social" because it includes the imputed value ("shadow price") of "externalities" (such as clean air and water, "green lungs" in urban areas, and so on) that are not priced by the private market on either the benefit or the cost side, and also because it balances (or trades off) the often divergent or competing interests of different stakeholders ("winners and losers") in a particular project.

The net result of this calculation depends on the value ("weights") assigned to particular costs, benefits and stakeholder interests, and the rate at which one "discounts" them into the future. There is a strong element of subjectivity in any such calculation, which necessarily reflects the relative values of the society in and for which a particular public project is being planned. Politics enters into the calculation to the extent that these values reflect the popular vote electoral results in democratic countries.

The Ministry of National Development (together with the Land Transport Authority, Singapore Land Authority and Urban Redevelopment Authority) proposes that Bukit Brown cemetery be progressively "redeveloped", beginning with an initial 4,000 graves to be removed for the construction of an eight-lane highway designed to reduce traffic congestion in contiguous areas. Mr Chew proposes that the entire cemetery be transformed into a National Heritage Park.

To maximise its pecuniary benefits, the government should favour high-priced housing, which would also maximise profits to private property developers, the wealthy who can afford to buy such housing for their own residence or rental income, and banks which lend them the money to make such purchases. In return the government stands to benefit from increased tax revenues and the profits of any GLCs involved in the project.

These concentrated, mostly "private" benefits of the MND proposal are readily calculable from market prices. The proposal's costs are more widely dispersed, diffuse and "social" and so more difficult to assign monetary values to. They include: loss of natural habitat, environment and fauna (which Singapore often touts in tourist promotion ads), loss of recreational space (and its attendant health, social and psychological benefits) for both locals and foreigners, and loss of cultural heritage, history and national identity.

All of these are "public goods" which by their nature are undervalued by market forces. The "losers" here are members of the "general public" (including foreign visitors) who on average would be lower-income than the "winners" of the MND proposal, but especially over time, greater in number. MND's project is therefore "regressive" in terms of delivering benefits more to the higher-income and imposing costs more on the lower-income.

The "weights" we assign to the gains of "winners" and losses of "losers" depend on how we value them, which in turn depends on the availability of substitutes or alternatives, and on our own collective values. For example, other land exists for the 50,000 housing units proposed by MND.

True, the housing would not be as centrally located, but the vast majority of Singaporean home-buyers now face this anyway, and the island is so small, the inconvenience of additional distance is only incremental.

Reducing traffic congestion might also undermine the government's goal to limit car ownership and use, and the energy and environmental costs it generates. Already a very high proportion of Singapore's extremely scarce land area is devoted to roads and highways, and experience shows that continuous increases have not permanently reduced congestion - hence the "need" for the Bukit Brown highway itself.

I am no civil engineer, but instead of cutting through Bukit Brown, why not construct a smaller underground highway that would not disturb the cemetery above ground - as has been done in many other sites in Singapore? As for tax revenues, our government already runs huge budget surpluses, and would still collect (only slightly lower) taxes on the 50,000 housing units if they were built elsewhere.

There are far fewer alternatives available to mitigate the loss of natural habitat and natural recreational green space in Singapore, and none for the unique cultural heritage resource that Bukit Brown presents. As a multi-racial society Singapore must (and does) value the cultural assets and expressions of all ethnic groups, including those no longer present in Singapore (the Armenian Church, for example).

All our heritage has communal origins, hence we should celebrate all forms of communal heritage as our shared heritage; it would be particularly peculiar if we were to preserve only British colonial architecture, say, and not that of the Chinese, Indians and Malays.

Understanding this, visitors to Bukit Brown include many non-Chinese, who are interested not just in Singapore's Chinese heritage, but also representations in the cemetery - in those buried there, and the material culture of the tombs - of the longstanding regional and global connectivity of which we are justifiably proud. Indeed, as the World Monuments Watch designation shows, Bukit Brown can be considered not just a Singaporean or Chinese heritage site, but rather a world heritage site.

Respecting those who lived or passed through a place before us is a hallmark of all civilizations; hence the attraction of Angkor Wat and Egypt's pyramids to the whole world, and the universal outrage felt at the Taliban's destruction of the Bamiyan Buddhas in Afghanistan. Bukit Brown may not be in the same league in terms of antiquity and artistry, but to dismiss it as therefore irrelevant to human history is to disparage our very existence as a nation.

Mr Chew's proposal is an intriguing alternative to MND's. It essentially seeks to codify, capture and extend more widely the potential benefits (economists' "utility") already existing in Bukit Brown, but not fully realised by the general public.

Its costs would be relatively limited, especially as the opportunity costs could be reduced by relocating the 50,000 housing units elsewhere, while its benefits would be broadly distributed and permanent. To me, tourist revenues, environmental and recreational benefits, while important, are not as significant as the unique and irreplaceable cultural heritage the cemetery embodies.

We know that as societies become more affluent, the value they assign to non-material "intangible assets" such as history, aesthetics, knowledge and experience increase. Singaporeans are or will be no different. That so much of Singapore's natural and cultural heritage has already been destroyed makes the little that remains, like Bukit Brown, even more rare, precious and incalculably valuable, and it will become more so as time passes.

I disagree with Mr Goh that preserving Bukit Brown is a "luxury", but if it is, surely it is one that, as one of the world's richest countries, we should be able to afford, particularly as it relates so intimately to our fragile but fiercely-held sense of national identity.

Particularly at a time when many Singaporeans are feeling beleaguered by the large and rapid influx of foreigners - an "unnatural" population increase that might be seen as responsible for the traffic congestion and housing shortage that are the rationale given for the need to "develop" (or "destroy") Bukit Brown - the drastic act of removing one of the last remaining embodiments of our shared history risks undermining the very spirit of national unity that we have collectively worked so hard to build and to treasure.


• Linda Lim, a Singaporean economist, is professor of strategy at the Stephen M Ross School of Business at the University of Michigan. Bukit Brown contains a 'live' (empty) tomb constructed by and for her great-grandfather Kung Tian Siong (1876-1958), who was buried in the Bidadari Christian cemetery that has since been demolished. 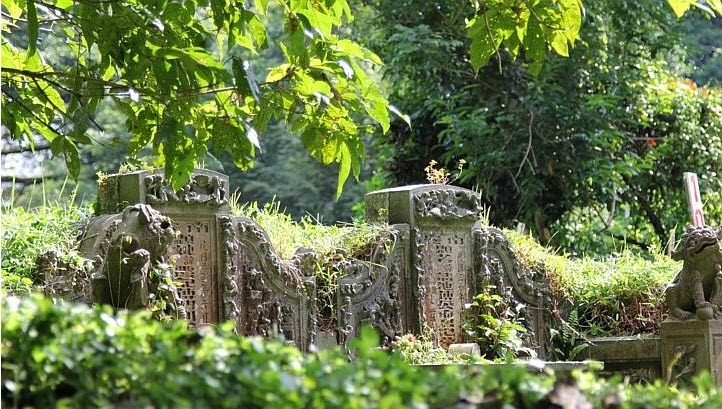 INTANGIBLE ASSET
Bukit Brown can be considered not just a Singaporean or Chinese heritage site, but rather a world heritage site. - PHOTO: SINGAPORE HERITAGE SOCIETY