By Linda Lim For The Straits Times 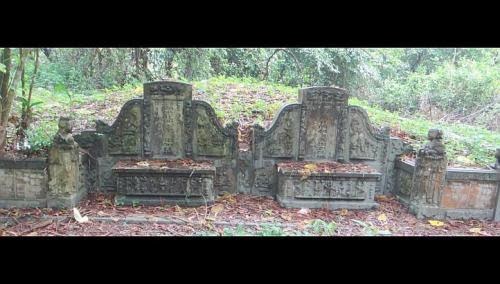 The writer’s great-grandfather Kung Tian Siong shares an empty tomb in Bukit Brown with his second wife, Lie Sio Nio. It is a popular stop on tours of the cemetery as its inscription notes that he is a descendant of Confucius. The writer’s family had no prior knowledge of this tomb however, as Tian Siong had been buried in the Christian cemetery at Bidadari in 1958. -- PHOTO: COURTESY OF HUI YEW-FOONG


MY FAMILY always knew that we were directly descended from Confucius.

This is because my Malacca-born great-grandfather Kung Tian Siong (1876-1958), who died when I was seven, was very proud of his lineage. His most prized possession was a "family tree book" that he kept under his pillow, but it disappeared when he died. I surmise that it is the 1937 version of the Confucius Kong family genealogy, which must have listed him and his younger brother, Kung Tian Cheng (1879-1915).

The family attributed the physical height of various members (myself included) to our "Shandong ancestry". An Aug 27, 1934, Straits Times article (wrongly) noted that Tian Siong was from the 74th generation. He was from the 72nd.

Both brothers were educated at the Anglo-Chinese School (ACS) in Singapore and went to China to fight for the Kuomintang against the Qing Dynasty in 1911. Tian Cheng later died in Peking while in the service of China's warlord, President Yuan Shikai. A multilingual scholar-librarian and "prolific writer", he is written about and pictured in Song Ong Siang's 1923 book, One Hundred Years' History Of The Chinese In Singapore.

Tian Siong met my great-grandmother, Siauw Mah Lee, in a Methodist church in Singapore, and proposed to her through Miss Sophia Blackmore, founder of the Methodist Girls' School (MGS), where Medan-born Mah Lee had been the first Chinese student and became one of the teachers.

Tian Siong and Mah Lee had three daughters - Darling Kim Neo, Susie Gin Neo and Edna Gek Neo (my maternal grandmother) - after which they divorced, most likely due to Tian Siong's desire for a son.

They remarried, but Tian Siong did not have any children by his second wife, a "rich widow" from Java named Lie Sio Nio/Lee Seok Neo (Nona). So, in the patriarchal Chinese tradition, his Confucian lineage ended.

Tian Siong became a prominent businessman in Singapore, noted as a pioneer in setting up some of the city's first cinemas, which were later sold to the Shaw family.

His diaries (written in English, though he was also fluent and literate in Mandarin and Peranakan Malay) note many visits to the theatre, and to Universal Studios in the United States, on one of his round-the-world voyages in 1928, when he also attended an 8,000-person Methodist convention in Kansas City.

When Nona died, her lavish funeral was reported in The Straits Times of Oct 18, 1926 as being "carried out in the European style" with the procession consisting of "one long stream of cars extending back for nearly half a mile". And that is where Bukit Brown comes in.

In July last year, a poster at the exhibition, Bukit Brown: Our Roots, Our Future featured Kung Tian Siong and his "live" (empty) tomb, part of a double-tomb with Lie Sio Nio that had become a popular stop on Bukit Brown tours, in part because the tombstone inscription noted that Tian Siong was a 72nd generation lineal descendant of Confucius.

A family member came across an ACS Alumni Facebook post of the Bukit Brown poster, which correctly noted that Tian Siong had been educated at ACS, but incorrectly assumed Lie Sio Nio was Siauw Mah Lee.

Our family had no prior knowledge of the tomb, though the names of his daughters, sons-in-laws and grandchildren born before 1927 are engraved on it.

Tian Siong, who ended his days as an evangelist and lay preacher at Geylang Methodist Church, had been buried in the Christian cemetery at Bidadari (from which his remains were exhumed and moved to a government columbarium in 2002). I attended his funeral in my MGS uniform.

Following the discovery of the Bukit Brown tomb, I decided to piece together information and photographs I had collected over the years on all the branches of my family, weaving them into a single narrative, Four Chinese Families In British Colonial Malaya: Confucius, Christianity And Revolution.

This was self-published for distribution to family members and research libraries as a small contribution to the history of the Overseas Chinese in South-east Asia, a subject which has also formed part of my own scholarly endeavours.

Besides the Bukit Brown researchers and family members, most notably my mother, Irene, this effort benefited greatly from the assistance of Singaporean historians Wang Gungwu and Hui Yew-Foong, and from the online archives of Malayan and Singapore newspapers at the National Library.

The three million to four million direct descendants of Confucius alive in the world today include many in South-east Asia, and they used to have an association in Singapore, which my great-grandfather headed.

The "line" and the "name" may be gone from our branch now, but many of the themes that emerged in my reflection on all my families' lives in the 19th and 20th centuries remain in the 21st - including Chinese tradition, Christian religion, intellectual and social engagement, women's education and empowerment, and above all, globalisation, ethnic diversity and cultural hybridity, as reflected in a recent photo of the 74th, 75th and 76th generations of Tian Siong's descendants in Malaysia.

There are also 77th generation descendants in Singapore, and others in Britain, the United States and Australia.

The experience of excavating my family's histories has reinforced my respect for the importance of physical landmarks - in this case, the Bukit Brown Cemetery and its tombs - in invoking and preserving our collective history. As the July 2013 exhibition title had it, our roots and our future are intertwined.

I hope that many other families will find their histories at Bukit Brown and other places in Singapore, and share them with future generations, as my great-grandfather did. 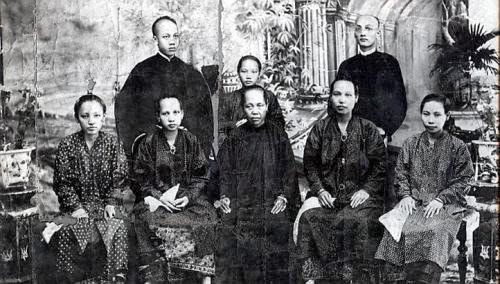 Kung Tian Siong (standing, right) and his wife, Siauw Mah Lee (seated, far right), in a 1899 picture with Tian Siong’s widowed mother, brother Tian Cheng and his wife, and their sisters, in Singapore. -- PHOTO: COURTESY OF THE FAMILY OF LINDA LIM 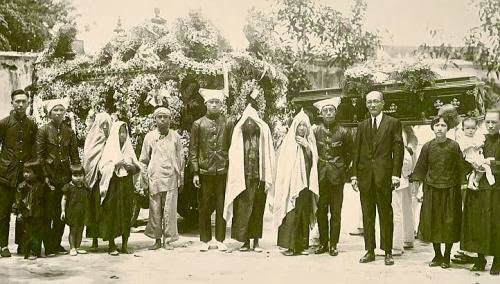 When Kung Tian Siong’s second wife, Nona, died in 1926, her lavish funeral was reported in The Straits Times. Tian Siong is on the right wearing a tie. -- PHOTO: COURTESY OF THE FAMILY OF LINDA LIM 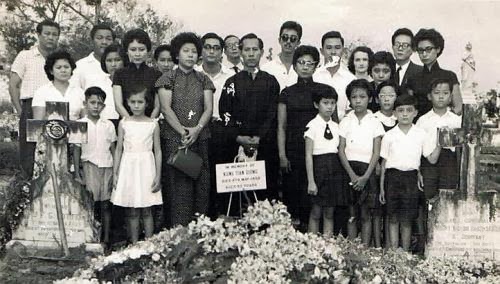 Kung Tian Siong’s funeral in 1958. His remains were moved to a government columbarium in 2002, from the Christian cemetery at Bidadari. The writer is fourth from the right in the front row. -- PHOTO: COURTESY OF THE FAMILY OF LINDA LIM

The writer is professor of strategy at the Stephen M. Ross School of Business, University of Michigan, in the United States. Her book, Four Chinese Families In British Colonial Malaya: Confucius, Christianity And Revolution, is available at the National Library.