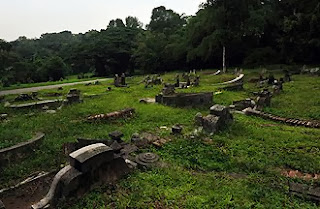 About 5 per cent of the more than 100,000 graves in the Bukit Brown cemetery is expected to be affected by the building of the new road with four lanes on each side. Construction is slated to begin in 2013 and is expected to be completed by 2016. -- ST PHOTO: ALPHONSUS CHERN

A NEW dual four-lane road is the first step in the clearance and redevelopment of the Bukit Brown area.
When the road is completed by 2016, it will serve as a link between Adam Road, the Pan-Island Expressway and Thomson Road for residents of future developments there.
Provisions have also been made to connect future residents to the MRT network, with an area set aside for a Bukit Brown MRT station on the Circle Line.

However, the Urban Redevelopment Authority (URA) could not give details of the other developments slated for the area.

Heritage enthusiasts have been lobbying to keep the area untouched after the URA announced in May that the 86ha Bukit Brown cemetery off Lornie Road is likely to make way for redevelopment.

The building of the new road alone will affect about 5 per cent of the more than 100,000 graves in the cemetery.

Once the graves that need to be exhumed have been identified, the Land Transport Authority (LTA) will contact families affected.

The exhumations and cremations of the remains in these graves will be done in the fourth quarter of next year.

Assistant Professor Chua Ai Lin, an executive member of the Singapore Heritage Society, said it was still unclear what the impact of the road would be on the cemetery.

'LTA has not confirmed where exactly the road will cut through and which graves are to be exhumed,' she said.

She pointed out that the graves of more prominent personalities are located on higher hillside.

These include the remains of the 19th-century tycoon Ong Sam Leong.

'What we feel should have been done was to give us more lead time in documenting these graves,' she said, noting that construction work for the road begins in 2013.

The society is in the midst of organising a team of experts to document the more than 100,000 graves.

She added, however, that the LTA seemed open and flexible to the suggestions of the society on preserving some of the more important graves.

Nature Society (Singapore) president Shawn Lum said it may be possible for the building of the road to be done in a particular way to minimise the impact on nature.

'As the road will divide Bukit Brown into two segments, LTA should look into building a connecter to allow wildlife to move between the two areas,' he said.

He added that the likelihood of roadkill should be minimised with fencing or other means to discourage animals from crossing the road.

The impact of noise on the animals in the area should also be looked into, he said.

The LTA said it was working with the various agencies to preserve, identify and document the key heritage elements of the cemetery.