Our father and Sun Yat Sen

Our father and Sun Yat Sen 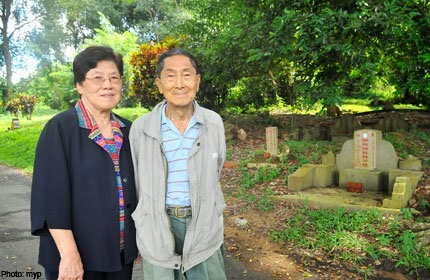 The 86ha cemetery off Lornie Road has been in the spotlight since it was announced in May that it has been earmarked for redevelopment. -myp


HE MIGHT not be quite as big a household name in Singapore's history as some buried in Bukit Brown Cemetery, but Mr Lim Keng Chiew played a key role in political leader Sun Yat Sen's revolutionary works in Singapore back in the early 20th century.

Mr Lim (also known as Lim Jing Qiu or Lin Ching Chiu) was one of the 14 founding members of the Singapore branch of Dr Sun's Chinese Revolutionary Alliance (also known as Tongmenghui) from April 1906, along with others such as Mr Teo Eng Hock, Mr Tan Chor Nam and Mr Lim Nee Soon.

Called the Nanyang branch, it served as headquarters of the organisation for South-east Asia. ` Dr Sun had visited Singapore eight times between 1900 and 1911 and stayed in the newly opened Sun Yat Sen Nanyang Memorial Hall at 12, Tai Gin Road, on three visits. He kept in close touch with his members, including Mr Lim Keng Chiew.

Mr Lim, who was elected the secretary of the alliance, was also one of the founders of a Chinese daily, the Zhong Xing Ri Bao, launched in 1907, where he contributed articles on democratic doctrines.

He managed the leader's finances, contributed funds and coordinated donation efforts. He gave impassioned speeches for the revolution. For his good work, he was awarded a merit certificate of commendation in 1912 by Dr Sun.

Mr Lim was an illustrious classical scholar from Mao Hou Village in Xiamen County who obtained third place in the imperial examination in China in 1895.

A promising magistrate, he grew disillusioned with the corrupt Qing government and moved to Singapore (then Nanyang) in the late 1890s or early 1900s.

Also working as a businessman and a Chinese-language teacher, he had four wives and 13 children. He died in early 1942, at the start of the Japanese occupation of Singapore, when he was in his 70s.

Two of his children took my paper along when they visited their father's discreet grave located under a tree at Bukit Brown last week. They said they do not know much about their father as they were very young when he died.

What they knew was sketchy, from anecdotes shared by their mother, Madam Chan Ah Soon, who was his fourth wife.

It was only when youngest son Lim Poh Chye, 72, a retired chartered accountant, decided to delve into his family history seven years ago that he discovered their father played a key role in history. Speaking on the line from Hong Kong where he is now based, he said he was only three when his father died, while his sister, Madam Lim Kim Eng, 71, was barely two.

From his own research and from talking to historians, he found out that the senior Lim was a bold, charismatic and learned man who wrote poems and did calligraphy.

As for how his father died, Mr Lim said that it could be because the former was depressed after his family was dispersed and the dictionary he had been writing was stolen. He was also bankrupt and suffered from starvation during the Japanese Occupation.

"If you lose everything and all your support, if you find that your country is being run by somebody else...you'll be quite heartbroken," Mr Lim said.

Madam Lim said her father was given a letter by a Japanese general during the Occupation, and was told he would be protected if it was pasted on his door. However, he refused to do so as he did not wish to betray his country, recounted Madam Lim, who was told this by their mother.

Madam Chan's eldest son, Mr Lim Poh Chuan, 86, who was 17 when his father died, said his father was "an honest and straightforward man" who loathed corruption. He had looked after the huge family very well, he added.

Now, the late Mr Lim's children hope that his grave at Bukit Brown will be preserved, or, at the very least, for Singaporeans to know who he was and what he had contributed.

"I'm really very proud of my father and I wished I had got to know him better," said the youngest Mr Lim.

He added that his father was a good role model who sacrificed greatly for his ideals and his love for country.

The 86ha cemetery off Lornie Road has been in the spotlight since it was announced in May that it has been earmarked for redevelopment.

The Government later said that a new road will be built through the cemetery, affecting about 5 per cent of more than 100,000 graves there. Construction work begins in 2013, and is slated to be completed by 2016. Affected graves will be documented for posterity.

The youngest Mr Lim was dismayed to hear of the redevelopment plans. He and his siblings visit their father's grave every year during Qing Ming.

"The roots and foundation of a society are its past," he said. "It is where you can begin to teach future generations about one's customs, culture, and values such as filial piety. If you do away with it, your present will fall."

He added: "The economic-development argument alone (in not preserving the cemetery) is not convincing enough."

However, his sister said she was prepared for the eventual redevelopment and had bought a niche at Bright Hill Crematorium and Columbarium for their father more than a decade ago.

"We knew that this was a valuable piece of land...We don't have a choice," said Madam Lim.