FOR a long time, Bukit Brown had been hidden from public view, awareness and scrutiny.

But, now, it has been identified as a 2014 World Monuments Watch site, about to be irreversibly damaged by the construction of an entirely avoidable eight-lane expressway.

This will forever alter its unique nature, and destroy not just a huge swathe of nature, but also 4,000 graves in its path.

Even as I write, the bulldozers are about to rumble. The point of no return is nigh.

I am a great admirer of Singapore's civil servants. They are highly competent, incorruptible, and think hard on solving Singapore's problems.

They got us to where we are today.

But in the case of Bukit Brown, they have fallen short.

An intervention is needed. The political masters should act now to halt a grave error.

The plan to drive the highway through Bukit Brown was to solve traffic congestion. The new highway would let motorists bypass Lornie Road and connect them more directly to Pan-Island Expressway. All that was needed: A straight line through a closed-down cemetery called Bukit Brown.

The highway is just the start. The plan is to remove the entirety of Bukit Brown and contiguous cemeteries - all 162ha - and to use this prime location to house up to 50,000 new homes in 15-20 years' time.

But Bukit Brown is the largest Chinese cemetery outside China, with more than 200,000 immigrant members of the Chinese diaspora buried there.

There are reburials of older graves that date back to 1833, just 14 years after the founding of modern Singapore. And this is the burial ground for most of the pioneers of Singapore, whose names identify the roads of this country - such as Joo Chiat, Keong Siak, Kheam Hock, Eng Neo, Ong Sam Leong, and my great-grandfather, Boon Lay.

The removal of Bukit Brown will serve Singapore's needs of managing traffic congestion, and provide space to house the growing population.

Yet, the benefits are too little; the costs are too high.

Buried at Bukit Brown are the earliest generations of immigrants who built this society, the towkays and the coolies, and the wide swathe of society in between.

Bukit Brown is not just a cemetery for the dead, it is a unique ethnographic museum for the living.

Hokkiens, Teochews, Cantonese, Hakka - Chinese of all dialects are buried here, with the names of their descendants on the tombstones, looked after by the Jade Girl and the Golden Boy, accompanied by carved stone lions, phoenixes, tigers' paws. Guarded by turbaned Sikh guards and angels. Recorded with different calendar systems - Qing, Confucian, Republican and Gregorian.

Rich layers of history and ethnography in the material culture of the graves of Bukit Brown have only recently been discovered, documented and expounded by researchers from the architectural faculty of the National University of Singapore.

It might be thought that once they have been documented they can be destroyed. But if this was right, then one might argue that once Stonehenge has been filmed and recorded, why not build a Tesco and a parking lot on its site?

Its size and its contiguity to the Central Catchment Area of MacRitchie and Peirce reservoirs form a critical mass that influences the rainfall, the micro-climate of the district and the climate of the island.

Take away the natural sponge - the verdant flora and soils of Bukit Brown - and rainfall may possibly be channelled to flood Orchard Road!

If planners in the Ministry of National Development, Urban Redevelopment Authority, Land Transport Authority and Singapore Land Authority cannot understand this because they have a more immediate micro-perspective, then it is up to the political leadership to step in now to take corrective action.

A political leader has now got to step up to the plate, step into the breach and switch off the engines of destruction that will obliterate our heritage.

Call it off. Save the day.

The decision to build that highway, or those 50,000 houses, can still be made in the future - 30 or 50 years from now. But to proceed is to perform an irreversible act of destruction.

How should Bukit Brown be preserved? As a new, transformed national heritage park.

It will be a place of sanctuary, sanctity, sacred burials, cultural and historical heritage, education, research into our origins and identity as a nation.

It will be a unique tourist attraction, a park that caters to the recreational needs of citizens and visitors.

What does it take to see that Bukit Brown needs to be saved and not destroyed?

Political vision; intelligence; and clarity that will be transformative for Singapore. A single bold decision. Leadership. 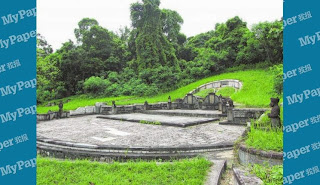 SO MUCH LIES HERE: Rich layers of history and ethnography in the material culture of the graves of Bukit Brown have only recently been discovered, documented and expounded by researchers from the National University of Singapore.PHOTO: THE STRAITS TIMES

The writer is chairman of The Substation and a consultant fundraiser. This article first appeared in The Business Times Weekend.