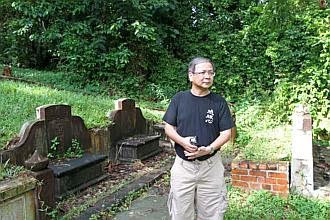 Engineer Victor Yue's vision - scan a tombstone with your smartphone and get information about the grave
Through the use of mobile technology, Mr Yue hopes some of the Chinese messages inscribed on the tombs in Bukit Brown can be preserved, and shared with everyone. -- ST PHOTO: CHEW SENG KIM


Graveyards are hardly the place to use a mobile phone, but Mr Victor Yue hopes that will be the case for Bukit Brown Cemetery - and soon.

The telecommunications engineer wants to bring mobile technology to the cemetery's old tombstones - a QR code that, when scanned with a smartphone, will download information about the deceased, or link to videos or photographs online about the grave.

Short for Quick Response, a QR code is a small, square, black-and-white barcode that can store data, or link to online content.

It is already being used in some cemeteries in the United States and New Zealand, but Mr Yue said he was inspired by a recent trip to Japan, where he saw the codes used with retail goods and publicity posters.

'They were everywhere. Since then, I've wondered how to use this techno-logy in Singapore.'

The codes are especially useful in Bukit Brown, said Mr Yue, 59, because most of the inscriptions on tombstones there are carved in Chinese script.

With online content about the graves put together by other Bukit Brown lovers, the codes can work as a guide to decipher what is written on the tombs for people who do not understand the language.

'If you don't know Chinese, you can't read; how are you supposed to know more?'

It was this same question that inspired Mr Yue's other hobby.

He is the moderator of an online Taoist e-list forum group, taoism-singapore, which, since its launch in 2004, has found a community of Chinese heritage lovers who speak mainly English.

The group's some 500 members post photographs, ask questions, and those in the know help to decode them.

Mr Yue said that, through the QR codes, some Chinese messages inscribed on the tombs in Bukit Brown can be preserved, and shared with everyone.

Many of them exhort their descendants to lead moral lives. 'They teach values like filial piety and Confucian ethics,' he said.

'These messages are our heritage. They are part of who we are today.'