With the increased in population in Singapore, We envisioned that more land would be taken up by infrastructures.

Over the years, these measures include improvement in road systems and ERP. At the same time efforts have been made to make public transportation palatable to a wider section of the population. The greatly expanded rail network is a case in point.

However, it has been demonstrated that these measures, touted as ways to slash or curb car numbers, have been unsuccessful.

It must also be recognized that the car population cannot be allowed to grow unabated, especially when there is fierce competitive uses for limited land. A measure of proportionality must prevail.

Should it be skewed one way or another, they should be for the good of the great majority.

In this instance, a 8-lane highway is to be built to allow for a smoother flow of traffic over a short stretch of road.

This is essentially to address a localized problem for some transient periods of time.

This problem could also be contributed by heavy and slow traffic flow in regions immediately adjacent to Lornie Road. We ponder its necessity and its ability to ameliorate the bottleneck encountered here and further afield, in areas leading to and leading away from Lornie Road.

These glacial traffics hinder the flow of vehicles, including public buses, which serve a greater proportion of the commuting public. With these schedules disrupted, it is not surprising that public transportation has been branded as unreliable.

An alternative passage to the PIE can be implemented that could alleviate the congestions experience along Lornie Road and the close vicinities.

With the continuing expansion of the rail network (more in the pipeline), it is also time to relook current measures to manage car population.

The traffic coming from the north-east region of Singapore is largely channeled to the PIE via Lornie Road. The main axes leading to Lornie Road are Bartley Road, Upper Serangoon Road and the CTE, through Braddell Road. Lornie Road also receives substantial traffic coming down from Upper Thomson Road, serving heartland areas of Bishan and Ang Mo Kio.

Traffic going down Adam road could have been slowed down by the busy Farrer-Bukit Timah junction. The slip roads from Lornie Road into both direction of PIE may also be inadequate.

Furthermore, the PIE itself may have been overwhelmed by heavy traffic, streaming from the east and city and north, via the CTE. This, in turn, slows down the traffic joining and leaving PIE at that junction. Several schools are situated around Whitley Road and Bukit Timah Road. Parents dropping off and picking up their children also impede traffic.

All in, the traffic is the wider area around and linked to Lornie Road are in the same state, slowed to a crawl in those hours!

Lornie Road merely serves as a conduit to channel traffic from one congested area to another. Having passed through the snarl on Lornie Road itself, motorist would still find themselves inching their way through many of the roads with myriad of intersections. During peak hours, the traffic exceeded the carrying capacities of Lornie and these other roads that are either feeding traffic into or draining traffic from it.

The lighted junction of Sime Road and Lornie Road serves the needs of a small number of cars leaving SICC. But it contributes substantially to the congestion and should be done away with.

The capacity of the PIE can be doubled with a extensive viaduct built over PIE (akin to West Coast/Pasir Panjang Road, Upper Serangoon Road, near Lor Lew Lian) as a two-tier highway.

With leaving Bukit Brown intact in mind, a viaduct can start from the Thomson/Marymount /Braddell junction (Junction A) area, above the Thomson Road southward towards the old Police Academy, swing west at the corner on PIE west of the Thomson Flyerover (Junction B).

It may rejoin PIE somewhere before the Eng Neo (or even before Exit 22).

Alternatively, it can continue westwards to reach BKE. Eastwards, the viaduct can link up with CTE and perhaps beyond.

It thus allows some unhindered traffic on the viaduct, enabling them to avoid junctions or exit roads of no relevance to them.

At the same time, these measures de-congest the original PIE, early smoother traffic flow in and out of peripheral roads.

Doubling the capacity of main carriageways through multi-tier methodology should be carried out more widely.

This would allow the capacity of existing land devoted to roads to be harnessed several hundred percents. Converting new land to roads can be avoided, allow them to retain its present purpose or purposes that benefit other segment of the population (other than the motoring population). We ‘double’ exploit, where possible, the thousands of square kilometer of existing road surface that has already covered a substantial amount of land area in Singapore.

With direct reference to Bukit Brown, the grounds should be left in its existing state.

The value of natural greenery defies easy quantification in terms of its biodiversity, climatic and environmental moderation, aesthetic and therapeutic benefits.

The quality matters a great deal too.

Open grasslands, such as golf courses, are not substantive greenery, lacking in diversity and biomass. Here the greenery needs to be ‘multi-tiered’ as well and would do better to contribute the benefits mentioned prior.

Spaces need to be set aside for the times when the populace is not contributing to the GDP.

Though unquantifiable, they nevertheless have immense power and value and contribute positively to the national ‘pie’, our economy.


Overall, this new highway does not alleviate the jam if the downstream hiccups are not done away with. By zooming out, It would be noted that the traffic snarl cover areas greater than Lornie Road itself. A more comprehensive study is needed.


By building this highway, it could only mean that a greater volume of vehicles is trapped and sitting through the jam, spewing toxic gases into the atmosphere.


On a wider perspective, it will be a very expensive undertaking to accommodate more cars on our road. This is in terms of the resources and their impact on the health of the environment and the population.


A high level panel must be created to comprehensively relook the overall infrastructural needs at many levels and involving many levels of consultation. All concepts and projections, however mundane or radical, must not be hastily dismissed but duly and rigorously addressed.

The relevant agencies must be forthcoming in seeking expertise input, even non-mainstream ones. Pertinent information must be shared in order that consultation covers all aspects.

A convincing outcome would be one that is acceptable to all. 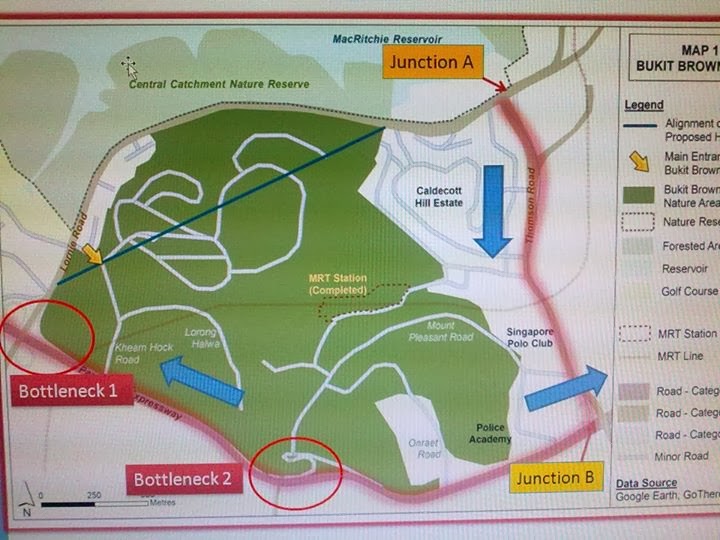