Mr Roney Tan comes regularly to pay respects to his grandfather Tan Wi Yan, who was the grandson of philanthropist Tan Tock Seng.

Housewife Victoria Tan knows Kheam Hock Road well. After all, it was named after her great-grandfather, a businessman born in 1862.

But she had no idea he was buried at the Bukit Brown Cemetery, whose entrance is by Kheam Hock Road, until she saw photos of his tombstone online. Ms Tan, who is in her 40s, says: 'When I saw the picture of his grave, I was very surprised because I was told by my elders that he was not buried there.'

Last Saturday, she set out on her own, braving wet weather and the hilly, forested conditions of the cemetery, to hunt for his grave from a map she found online drawn up by tombstone hunters, brothers Raymond and Charles Goh.

She says: 'After all these years of not knowing where he is, I just had to visit him to pay my respects even though I have never met him before.'

Her interest comes after the Government last month confirmed plans to build a dual four-lane road through Bukit Brown Cemetery from 2013. About 5 per cent of the more than 100,000 graves will be exhumed.

This has sparked controversy, with some wishing to conserve the cemetery.

After news of the road plans were announced, many families have approached the Goh brothers for help in finding the resting places of their famous ancestors. They had been unable to find the graves on their own in the vast cemetery spanning 86ha.

Mr Charles Goh, 43, who is a construction company safety manager, says: 'Before news about the new road, we got very few calls from people who wanted to find their ancestors. Now, we get at least 10 calls a week.'

One such person is Madam M. Ong, the great-granddaughter of Cheang Hong Lim, who is known for Hong Lim Park. Together with her husband, the 69-year-old retiree will head to the cemetery soon when the weather lets up to visit her relatives' graves - her grandfather, Cheang Jim Chuan, is also buried there - for the first time.

'My mother knew that they were in Bukit Brown but she had no idea how to find the burial plot. The place is too big,' she says.

The mother-of-two says she started searching for their resting place after hearing the Goh brothers had found the grave sites because she wanted to fulfil her late mother's wishes of paying respect to their elders.

She says: 'The people who knew where the graves are are no longer around. As the present generation, we have to continue to search for them and let our future generations know, so they, too, can discover their history.'

Descendants say it is better late than never to find where their ancestors are buried as those folk contributed significantly to Singapore's development. 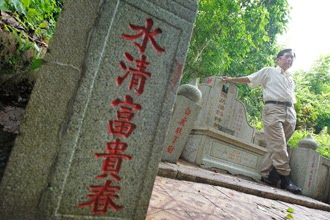 He feels this last piece of Singapore's history should be preserved and alternatives could be found to the proposed development plan.

The 64-year-old, who owns a furniture business, says: 'We don't learn history just for fun or only because it's interesting. The more we know about our past, the more we'll sink our roots here.'

Arguments aside, one descendant is glad to have found a grave he has been looking for for a while. Mr Peter Wee, who is the great-grandson of Tan Keong Saik, finally found the grave a few weeks ago. The 65-year-old says that searching for it was like looking for 'a needle in a haystack'.

He finally found it with help from Mr Raymond Goh. He brought along bunga rampai, a mix of potpourri and pandan leaves, to place at the grave and burnt some incense as well.

His great-grandfather's grave site is overrun with weeds, is partially hidden by shrubbery and has a tree growing on it. But Mr Wee, who is unmarried and runs Katong Antique House in East Coast Road, is delighted at the find.

He says: 'I am so happy to find him. There is that sense of awe, knowing what he did to help others during his time. By doing this, I'm fulfilling my filial piety to my great-grandfather.'

'I am so happy to find him. There is that sense of awe knowing what he did to help others during his time. By doing this, I'm fulfilling my filial piety to my great-grandfather.' 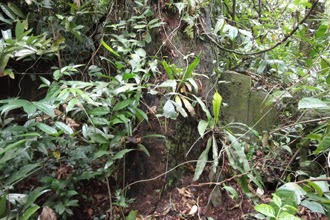 MR PETER WEE, on finally locating the grave (above) of his great-grandfather Tan Keong Saik, a well-respected community leader 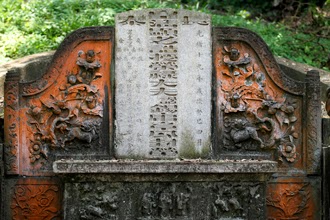 Madam M. Ong, the greatgranddaughter of Cheang Hong Lim, a wealthy Hokkien businessman who set up the public garden that is now Hong Lim Park, is looking forward to visit her ancestor's tomb (above) to pay her respects. -- ST PHOTOS: NEO XIAOBIN, NATASHA ANN ZACHARIAH

His name is familiar to activists who go to Hong Lim Park to be heard at Speakers' Corner.

Cheang, who was a wealthy Hokkien businessman, paid $3,000 to turn the space in front of Central Police Station into a public garden and hired two gardeners to maintain the plot.

He made his money running opium farms, which were popular in the 1800s. He also had a private fire brigade of 37 firemen.

The man, who died at age 52 in 1893, donated a piece of land for the rebuilding of the Fook Tet Soo Khek Temple in Tanjong Pagar.

The former red-light district near Chinatown turned chic destination of new restaurants and pubs was named after the Malaccan-born Tan, who died in 1909 at age 60, after having battled kidney problems.

Well-respected by both the local Chinese and European community at the time, he was involved in public affairs, such as the setting up of the Chinese Chamber of Commerce in 1906. He was one of the first Chinese to have an English-speaking household and had his children learn the language.

He was a director of shipping company Straits Steamship, a member of the Tanjong Pagar Dock Board and a Justice of Peace, a title bestowed upon him when he retired.

The road to Bukit Brown was named in honour of Tan, after he lobbied hard as Municipal Commissioner for a cemetery for the Chinese.

The Penang-born businessman was involved in the opium and spirit trade and also supplied coolies to the docks. He was also known for supporting the cause of education for girls. He was said to have donated generously to causes he supported and was a member of the Society of Arts in London.

He died in 1922, leaving behind six sons and four daughters.

The famous Seah Im Road next to Harbourfront MRT was named after Ang, who was a Hokkien immigrant from Tong Ann, Quanzhou prefecture, in Fujian. He had business interests in mining, rice, rubber and trading and owned land in Malaysia and Singapore. Many of his properties were along Telok Blangah Road, which is why the road there is named after him.

The Chinese community leader was reported to have become bankrupt in 1922, having overspent on his three wives and six children. He died in 1927.

This managing director of Oversea Chinese Bank and later the Oversea-Chinese Banking Corporation, was born in 1881 in a village in Amoy, near Fujian province in China.

He was known as a successful rubber magnate who was smart about his investments and made money by buying and selling his shares in the rubber business. He was also part of a group of businessmen who acquired the Sun Yat Sen villa in Singapore in 1937, which was later donated to the Singapore Chinese Chamber of Commerce to be preserved. The historic villa reopened last month after a $5.6-million revamp.

He died of a heart attack in 1943 and left instructions to set up the Tan Ean Kiam Foundation, which donates to charities and supports educational projects.