3,440 graves will be exhumed over next 9 months to make way for road 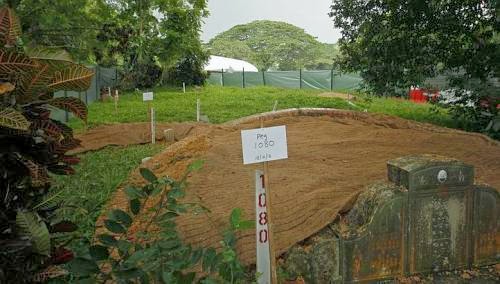 An exhumed grave at Bukit Brown Cemetery. The public exhumation began on Tuesday. A total of 304 graves have already been exhumed privately by family members. In all, 1,263 graves have been claimed to date. -- ST PHOTO: MARK CHEONG

EXHUMATION has begun at last at the Bukit Brown Cemetery, where more than 3,000 of nearly 100,000 graves will make way for a new road.

The public exhumation, coordinated by the Land Transport Authority (LTA), began on Tuesday. Over the next nine months, 3,442 graves will be exhumed.

A total of 304 graves have already been exhumed privately by family members. In all, 1,263 graves have been claimed to date.

The remains that are still unclaimed three years after exhumation will be cremated individually and scattered at sea.

Construction of the new road will begin in stages after the exhumation of affected graves is completed, an LTA spokesman said.

"While construction is ongoing, members of the public can continue to enter the other parts of Bukit Brown Cemetery that are not affected by the road construction. The details of access routes will be made available to the public when construction starts."

The exhumation process is being documented by anthropologist Hui Yew-Foong and his team, who have been appointed by the Government for the task.

Dr Hui, a senior fellow at the Institute of Southeast Asian Studies, said the team observes what rituals might have been carried out, what artefacts were buried with the dead, and if the tombs have any underground structure.

For instance, underground chambers were sometimes lined with bricks to keep coffins dry, while women might have jewellery or miniature cooking utensils buried with them.

Meanwhile, members of the public have sent letters to the Ministry of National Development as part of feedback about the Draft Masterplan 2013, pleading for the rest of the cemetery to be kept instead of redeveloping it for housing.

Today is the last day for the public to submit feedback on the Urban Redevelopment Authority's draft masterplan, which was made public last month.

Among those who have written in is Mr Ishvinder Singh, 26, a supply chain professional.

He became intrigued by Bukit Brown when he saw photos of Sikh-guard statues at the tombs of Chinese businessmen and officials. This led him to visit Bukit Brown and investigate its history as well as that of the Sikh community here.

"I realised that the Sikh statues weren't just about my own community, but about the interactions that took place between different communities," he said.