Bukit Brown activism: a race to save history

Bukit Brown activism: a race to save history 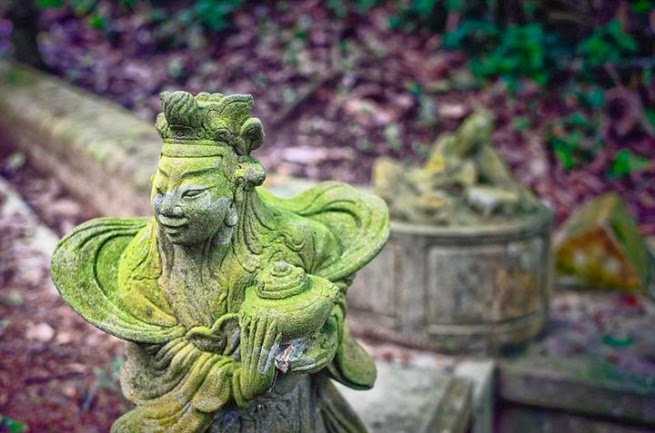 Photograph: SG Yung/Flickr
With a motto that states “We guide rain or shine”, the Bukit Brown volunteers in Singapore are fighting against time to save a crucial piece of the island nation’s history.

Standing amidst 173 acres of lush and undisturbed undergrowth in Bukit Brown, Singapore, one becomes aware of a sense of urgency in the air. A loose group of volunteers, a.k.a. Brownies, is in a race against time to save Bukit Brown and the graves of 3,746 pioneers from being cleared to make way for road extensions to alleviate traffic congestion. Indeed, the exhumation notices erected by the Land Transport Authority (LTA) at the entrance of the cemetery grounds declare with bureaucratic monotony that “part of the burial ground is required for the development of the new dual four-lane road. The LTA of Singapore will undertake the exhumation of the affected graves.”

Transiting from the present to a forgotten past
Much has been made of Singapore’s attitude and aptitude towards national progress, with its lauded urban development and regeneration strategies winning it fans (and clients) in other emerging Asian nations. Imagine then when a project encapsulating the country’s rapid progression inadvertently unravels a silent past, igniting a rarely seen and publicised grassroots activism.

The Brownies have been organising free weekend tours for members of the public who are keen to learn more about what lies beneath the largest Chinese cemetery outside of China. My firsthand experience was an overwhelming history lesson of the many patriots, business pioneers and British administrators who relocated from China, Penang and Malacca to forge new futures for their progeny. This mirrored the trajectory of the economic and population boom of the nation seen in the epochal years of the late 1880s until pre-World War II. The story lying silent at Bukit Brown is not just about the foundational years of Singapore’s mercantile society – it also covers the larger story of members of the Chinese diaspora who ventured south to build new fortunes.

“You can’t save what you don’t know,” said Claire Leow, a Brownie. “What we are doing is to focus on continually creating awareness for Bukit Brown. We tell stories of the luminaries and Singapore pioneers buried here, introducing visitors to the distinctive Peranakan motifs of the graves and highlighting the area’s eco-diversity. Did you know that Bukit Brown is home to 25% of the bird population in Singapore? That’s why we named our website All Things Bukit Brown. This place encompasses the historical, cultural and natural heritage that is unique to this part of the world.”
Brownie Tee telling the story of See Tiong Hua, a Malaccan-born tin mining businessman and comprador for HSBC, who was part of Singapore’s “Peranakan Establishment”. 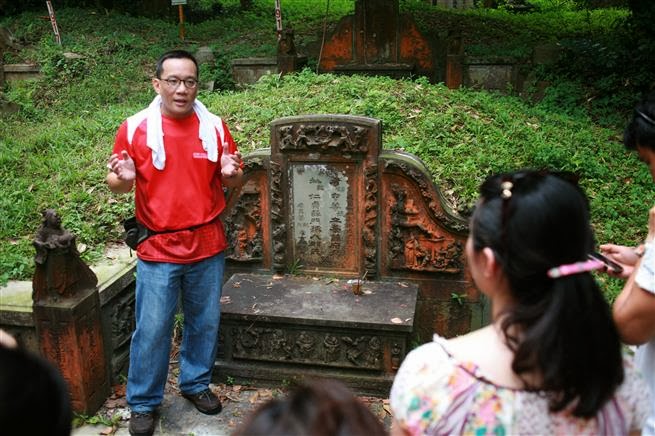 Brownie Tee telling the story of See Tiong Hua, a Malaccan-born tin mining businessman and comprador for HSBC, who was part of Singapore’s “Peranakan Establishment”.
Photograph: Veronica Liew
During the three-hour tour, Leow and fellow Brownies Catherine Lim and Fabian Tee took turns regaling us with tales of hardship, determination and patriotism (many of the Chinese merchants buried here funded the Sino-Japanese war efforts). Bukit Brown had once supported a brisk trade in nearby Kheam Hock Village (defunct since the 1980s), where residents worked as stone masons and master carvers to cater to the rich Peranakan families who, despite their Anglo orientation, commissioned graves honouring their clan lineage in accordance with Chinese traditions.

Ironically, this practice has made it doubly difficult for current generations of Peranakans to identify the graves of their ancestors because of their lack of Chinese literacy. On top of that, Lim says that World War II had likely disrupted family records, resulting in many forgotten graves in Bukit Brown, especially those that were re-interred when Bukit Brown was designated as the Chinese municipal cemetery in 1922-1972.

Bukit Brown activism
The cause has steadfastly remained apolitical. Activists have generated consistent publicity in Singaporean and international news, but to circumvent any potential blackouts by the state-controlled media, they also turned to social media.

Government agencies made sure that their engagements with activist groups over the Bukit Brown road expansion were conspicuous, but on March 19, a press statement calling for a moratorium on all works planned for Bukit Brown was signed and issued by the Nature Society (Singapore), the Singapore Heritage Society, Asia Paranormal Investigators, All Things Bukit Brown, S.O.S. Bukit Brown, Green Corridor and Green Drinks. The statement registered the “dismay and disappointment… (and) regret (at) the inadequacy of efforts at genuine engagement and discussing alternatives”, noting that not only was presentation time denied by the government representative in attendance, but the meeting was “severely limited to a select few.”

The following day, a Facebook posting by the Minister of State for National Development and Manpower, Tan Chuan-Jin, defended the government’s position on the closed-door meeting, stating that it was “never intended to be the type of dialogue desired and claimed by these (environment and heritage) groups.” He also said that the decision to proceed with the construction of the road “has not been an easy one” and that the LTA had factored in feedback from the interest groups in the design of the road, so as to “minimise impact to the cemetery, hydrology and biodiversity.”
Bukit Brown Cemetery Defiance, Singapore style
On August 5, 2013, the LTA announced that they had awarded a tender worth S$137.4mil to Swee Hong Limited to construct the new dual four-lane road and bridges, and that public exhumation will begin in the fourth quarter of 2013. Planners have claimed that the new road will alleviate rush hour congestion on the nearby Pan-Island Expressway and Lornie Road, where vehicular traffic is expected to increase by 30% in 2020. To date, only one-tenth of the graves marked for exhumation have been claimed by family members.

With the first bulldozers from the LTA due in early December, the Brownies defiantly face the ticking clock. As of the time of writing, the World Monuments Fund has listed Bukit Brown Cemetery on the World Monuments Watch 2014 – a worthy recognition and an opportunity for Singaporeans to promote their sites locally and internationally, work towards improved site protection and build community engagement in their preservation efforts. This listing is significant as it is the first time any site in Singapore has been named on the Watch. (George Town was also on this list prior to being listed on the Unesco Heritage List.)

A never-say-die attitude keeps the Brownies’ fight alive against what appears to be an impossible task. So if you find yourself in Singapore, do pay your respects to its pioneers at Bukit Brown, before they are ripped out from the earth forever.

Bukit Brown is located next to Lornie Road, Thomson Road and the Pan-Island Expressway. For updates on tour times, the S.O.S. Bukit Brown activities and stories of the interred, visit its official website.

Veronica Liew is a communications consultant based in KL (and occasionally Penang). A hobbyist photographer, freelance writer and bona fide Facebook addict, her favourite things to do while travelling are car-spotting, sitting beside large bodies of water and eating.