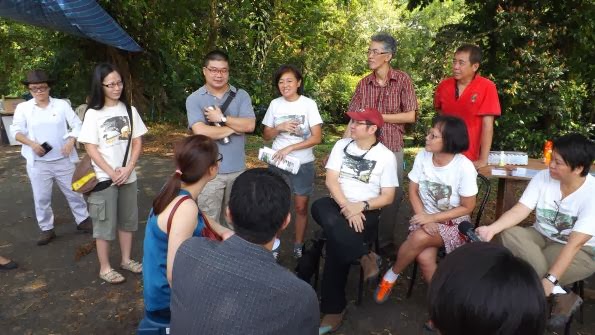 ATTENTIVE readers of this blog may recall that its eponymous columnist is fond both of visiting and writing about Bukit Brown (http://www.economist.com/blogs/banyan/2013/04/singapores-heritage) , a magically preserved green space in the heart of Singapore, which is home to the largest Chinese graveyard outside China. It is a rather sad tale, of a place of unique beauty and cultural value whose character is about to change forever as an eight-lane highway is sliced through it.

This update, however, is to report some good news for the dedicated band of enthusiasts (https://www.facebook.com/pages/all-things-Bukit-Brown/290489694353282)  who have been trying to draw attention to the cemetery’s value. They have succeeded (http://bukitbrown.com/main/?p=7930)  in having it included on the biennial watchlist of the World Monument Fund (WMF), of heritage sites around the world that are in danger.

An independent, New York-based organisation founded in 1965, the WMF this year listed 67 sites in 41 countries, out of 248 on whose behalf activists had applied. It rewards applicants who are promoting the site locally, trying to protect it, and involving local society in it. It is the first time Singapore has appeared on the list. The citation gets Bukit Brown right in just a sentence: “Bukit Brown is at once a study in the social and cultural history of Singapore and a green oasis in the heart of a densely developed urban environment.”

Singapore has no world heritage sites listed by UNESCO either, but it is trying to achieve that status for its Botanic Gardens (http://www.sbg.org.sg/) , a less unkempt green oasis that almost abuts Bukit Brown. The “Brownies”, as the cemetery’s fans call themselves, note that the centre of Georgetown (http://www.penang.ws/penang-attractions/georgetown-unesco.htm)  on the Malaysian island of Penang was listed by the WMF in 2000, eight years before it became a UNESCO site.

That, however, is not likely to presage a similar exaltation for Bukit Brown, nor even the government’s adopting Bukit Brown and linking the two sites. The National Heritage Board told the local media it would “explore how Bukit Brown Cemetery's heritage can be preserved, retold and/or integrated with future developments for the area, while recognising the need to balance Singapore's land use and housing needs with heritage preservation.”

The Urban Redevelopment Authority, however, was less tactful: Singapore, it said, “needed to find ways to make good use of our limited land in order to meet future demand for uses such as housing, industry and infrastructure.”

In an interview republished in his latest book, Lee Kuan Yew, Singapore’s elder statesman, who left the cabinet two years ago but still reflects the views of many in the government he led for so long, is, characteristically, yet more blunt in an interview reprinted in his latest book (http://www.stpressbooks.com.sg/One-Man-s-View-of-the-World.html) :  “if we need the land, and we have to dig up the whole of Bukit Brown to build on it, and put the ashes in a columbarium, we will do it.”

The Brownies point out that the government presents a false choice between space for the dead and space for the expanding population that Singapore needs to sustain its growth. Bukit Brown is also for the living, and for future generations interested in how Singapore became what it is today.

Time is running out, however. Nearly 4,000 graves (out of perhaps 200,000 in Bukit Brown and adjacent graveyards) have to be dug up to make way for the road. For those graves not moved by the inhabitants' families, government-organised exhumations are expected to start in December.