The Straits TimesThe historic Bukit Brown cemetery has been put on the 2014 World Monuments Watch (WMW), an international list of cultural heritage sites which are being threatened by nature or development.

The cemetery, which has been the final resting place of pioneering Chinese immigrants to Singapore since the mid-19th century, is one of 67 sites in 41 countries and territories on the biennial listing.

Work is scheduled to start early next year on a controversial eight-lane road through the cemetery, meant to ease congestion. And the 233ha site, closed to burials since 1973, is also slated for future residential use.

All Things Bukit Brown, an interest group which is keen to preserve the site's heritage and habitat, nominated it to the New York-based World Monuments Fund watch list. It was picked from 248 nominations - making it the first time that a Singapore site has made it to the list.

The WMW citation said of the road and redevelopment of the site: "In destroying the cultural landscape of Bukit Brown, it is a loss to all of society."

The non-profit World Monuments Fund has issued its watch list since the 1990s to raise awareness about threatened cultural sites. It has helped to helped restore sites in more than 90 countries, including the historic enclave of Georgetown in Penang.

Nominations are assessed by fund staff and heritage experts, based on the significance of the site, how urgent the conditions are and the viability of a feasible plan of action. Other sites on the list include Hong Kong's Pok Fu Lam Village, the churches of St Merri and Notre-Dame de Lorette in Paris and cultural heritage sites in Syria.

Referring to the decision by the World Monuments Fund to include the cemetery on its watch list, Ms Claire Leow, 46, one of the organisers of All Things Bukit Brown, said: "I hope it motivates communities to do more to take ownership."

While listed sites are eligible for grants from the fund, she said her group was not applying for any as none was needed. The group, which hosts weekly guided tours at the site, is also sticking to a call it made last year for a moratorium on plans for Bukit Brown and for more public engagement with the Government, she added.

"It recognises the cultural significance of the place rather than being confined to a local debate about whose ancestors are buried there," he said, noting that the Bukit Brown issue has made it to international publications such as The Economist.

Dr Gillian Koh, a senior research fellow at the Institute of Policy Studies, added: "All Things Bukit Brown, I suppose, would like the international spotlight and pressure to be put on this issue.

"To be fair, while the Government's not said it would never touch Bukit Brown further, it did reduce the number of graves and amount of land that would make way for the road. So it's not as if the Government's been intransigent about the issue."

A spokesman for the National Heritage Board said the listing supported the board's assessment that Bukit Brown is a heritage site rich in resources and memories.

She said the board was working with the public sector and community to document and promote the cemetery's heritage and explore how this could be "preserved, retold and/or integrated with future developments for the area, while recognising the need to balance Singapore's land use and housing needs with heritage preservation". 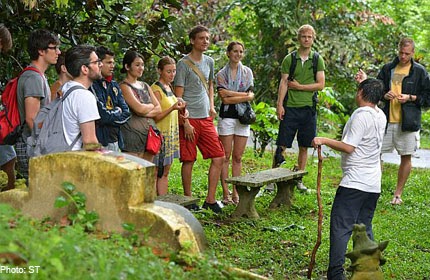 The historic Bukit Brown cemetery has been put on the 2014 World Monuments Watch (WMW), an international list of cultural heritage sites which are being threatened by nature or development.The cemetery, which has been the final resting place of pioneering Chinese immigrants to Singapore since the mid-19th century, is one of 67 sites in 41 countries and territories on the biennial listing.